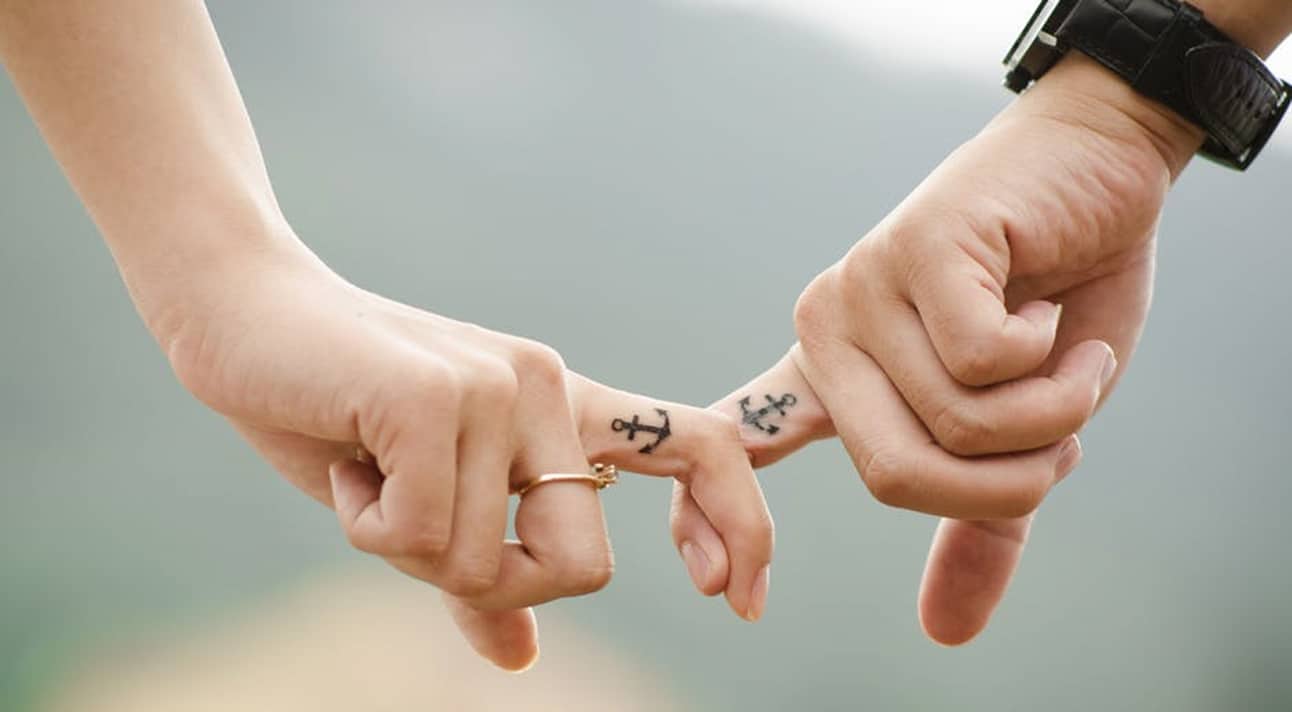 You can always tell when a man starts needing space in a relationship.

It starts as a small niggling thought, and ends up as a tightness you feel right in your gut. “What went wrong?” you ask yourself. “Doesn’t he like me anymore?”

Then you get antsy. You feel like you have to fix it, talk it out, find out why he’s suddenly gone cold on you. But stop right there; that’s pretty much the worst thing you can do, and it’s all to do with rubber bands.

According to John Grey, author of Men Are From Mars, Women Are From Venus, men aren’t that dissimilar from the elastics we used to playfully flick at one another in school.

When a relationship first kicks off, a man will typically try to get really close to a woman – cue us letting our guards down and developing feelings. It’s also annoyingly at this exact point that most men will feel the instinctive urge to start to pull away.

But contrary to popular belief, this doesn’t mean he wants to cool things off, or that his feelings have changed, says Grey; it’s all about hormones.

When a guy is confident and knows what he wants, his body experiences a testosterone surge; it’s what happens when he sees you, begins to court you, and you enter into the first flush of a new relationship. But, at the same time, his oxytocin (the hormone responsible for feelings of bonding and closeness) will also increase.

Sounds like the recipe for relationship bliss, right? Except that when oxytocin increases, testosterone decreases, which can cause a man to lose his nerve, doubting all his life choices. All of a sudden he starts to withdraw, and things go from “I don’t want to spend a minute away from you,” to “I don’t know what I want in life, but I know it’s not this.”

The good news is that the Rubber Band Theory predicts that a man will come back… but only if the woman lets him pull right to the end of his rubber band length without chasing him. When he reaches his limit, just like a rubber band, he’ll naturally feel an insatiable urge to snap back, bringing him closer to you once more; potentially even more intensely than before. But the cycle can’t restart if you don’t let the band stretch. So here’s how to ride it out and have him running back for more…

1. Realize it has nothing to do with you

It’s natural to freak out when the man in your life starts acting aloof, but nine times out of 10, it’s not about you. As Grey says, hormonal fluctuations in men mean they reach a point where they physically need to feel independent again and will automatically start to pull away without even realizing it. It’s not because you did anything wrong, so relax.

It’s potentially the hardest thing for a woman to do; especially since our own urge during a crisis is to pull closer to those we love. But testosterone promotes the exact opposite reaction in men, who instinctively feel the need to shut everyone out for a while when they’re feeling stressed. So if your husband, boyfriend or date wants space, resist the urge to fight it and give him space. If you chase after him, he’s going to feel pressured and smothered – that rubber band ain’t going to be taut enough to snap back if you don’t give him some slack.

3. Consider where he’s coming from before acting

When he stops paying attention to you, it’s tempting to lash out and get angry. But it’s really important to try to get in his head and see where he’s coming from. Has he been stressed at work? Does he have family issues going on? Try to figure out your motivation before you act. And then resist the urge to act at all. Instead, just let him know you’re there if he wants to talk and then quietly back away and give him some ‘me’ time – women aren’t the only people who need that every now and then.

4. See this as an opportunity to focus on yourself

When a man is withdrawing, many a woman will try to get him back on side by being extra attentive to his needs. But even when a guy is going through some stuff, he can smell desperation a mile off; and it’s not a pretty whiff. Turn that attention onto yourself. Practice self-soothing techniques to calm your nerves. Do things you love to do. Invest time in being your best self. There’s nothing more attractive than a woman who loves and is confident in who she is.

It’s been a few days, you’ve given him space, and you’re beginning to get nervous. Your instincts are telling you to plan a big romantic gesture to make him fall back in love with you. Remember when he told you to give him space? Your intentions may be pure, but he’s gonna see this as you not respecting his space. Let him be the one to bring the romance back to you… when he’s ready.

6. Get your emotions in check

It can feel wretched when the person you love gets distant. Your thoughts can run away with you as you obsessively go over every little detail of your relationship. The most important way of ensuring your own wellbeing in this tough time is to make sure you realize these are just thoughts. Worrying does nothing but amplify the problem in your mind.

7. Try to keep your interactions positive

It can be frustrating and even anxiety inducing to feel him pulling away, but resist the urge to accuse. Instead of being passive-aggressive, keep it positive. If he does something good, reinforce him. Rather than “Why haven’t you called?” try, “It’s so great to hear your voice.” Instead of “That’s the first time you’ve touched me in ages,” say, “I love it when you hold my hand like that”. You want to make it seem like you’re a safe haven from his complicated emotions, so that he associates you with happy feelings. It doesn’t mean you have to excuse terrible behavior, though. If he’s being a total jerk instead of just distant, call him out on it in an honest, upfront way.

Women aren’t the only people who need reassurance to feel secure in a relationship. Both parties need to know they can both trust and rely on each other. When he starts to withdraw, let him go, but let him know you’ll be there when he gets back. Sometimes even just acting like you’re secure yourself (even if you’re secretly going out of your mind) is enough.

It won’t be easy. You’re yearning for the affections of someone who’s backing away, which feels damn close to rejection. But be patient. Waiting out the withdrawal could be the best thing to happen to your relationship. Once he sorts out his feelings, he’ll snap back like that rubber band and hopefully be closer than ever.

After a few days, if he’s still withdrawing, check in with him. Ask him if there’s something on his mind, rather than directly asking if he’s okay. This is more of an open question and will give him space to be able to meet you in the middle with an answer. If he still says he needs space, give it to him, but give yourself a limit of how long you’re willing to reasonably wait. If it’s been over a week of silence, he might be looking to pull away in a much more permanent sense.

11. Be okay with not being able to control the outcome

Sometimes there’s more going on than a simple elastic can bear. Withdrawal could be the first step towards your man walking out the door. And that’s okay, because your actions should be the same no matter what: give him the space and love yourself first and foremost. If your main life focus is making yourself happy then the outcome doesn’t matter; you know you’ll be fine. Attraction is created through confidence, so hold your head up high. You’ve got this.

Images via pexels.com and giphy.com.

Comment: How have you dealt when you’ve had a man withdraw from you?