Donald Trump isn’t one to shy away from media attention. He’s well known for  the controversy that seems to follow him wherever he goes and isn’t afraid to lap it up, and since formally announcing himself as a candidate for presidency in the United States 2016 election, the amount of air time Trump’s gotten has only increased.

However the business mogul hasn’t always been a stellar example of how to handle yourself in the limelight. Whether he’s causing a media stir for harassing women over Twitter or insulting a nation during globally televised presidential debate, it seems his verbal filter is about as strong as his hair game.

So before Trump goes and says something else positively cringe-worthy, we thought we’d give the potential politician a run for his money and look back at some of the more offensive things that have come out of his mouth recently… 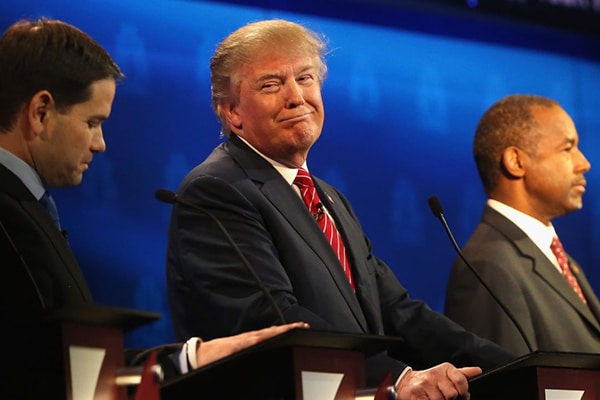 Riiiiight, so you’re saying Mexico is using America as a dumping ground for delinquents? 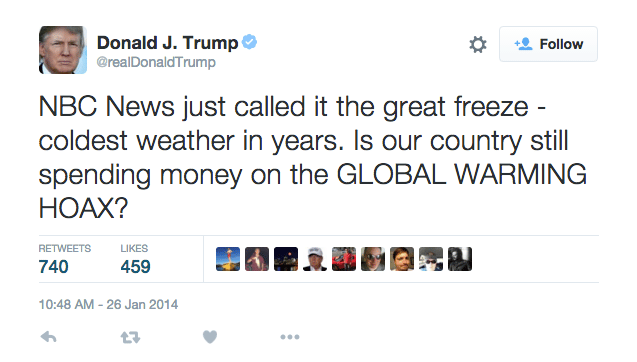 You, Mr Trump, are an idiot. 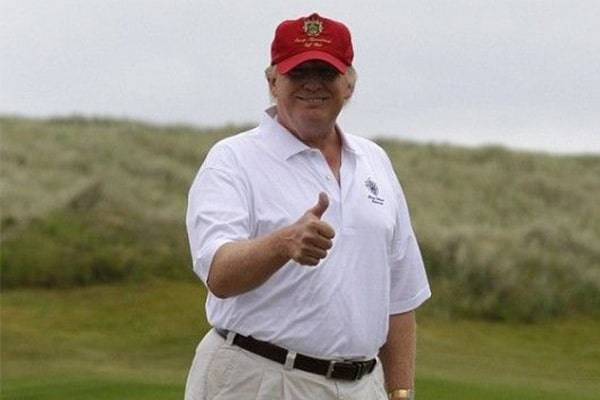 “If I were running The View, I’d fire Rosie. I mean, I’d look her right in that fat, ugly face of hers, I’d say, ‘Rosie, you’re fired.’ We’re all a little chubby, but Rosie’s just worse than most of us.” — Entertainment Tonight, 2006

Good to know that if you were to become president you wouldn’t be prejudice against anyone for superficial reasons like, say, how they look.

4. On people of African American descent 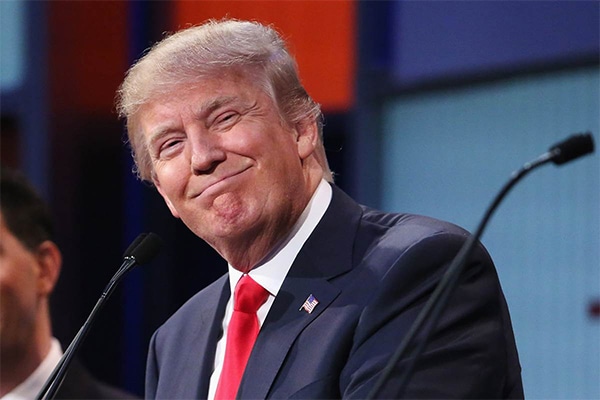 Uh-huh. If you have such a great relationship, then why are you calling them “the blacks”?

5. On his daughter’s beauty 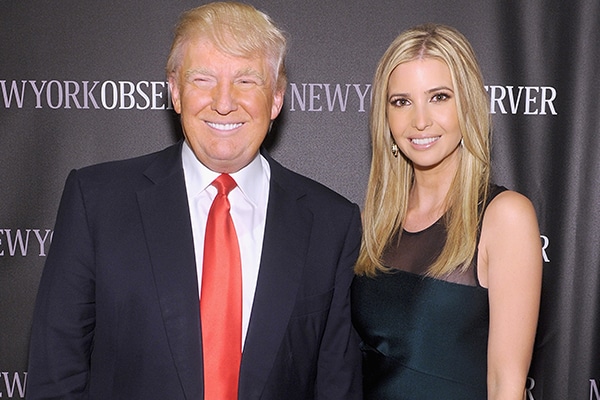 “I don’t think my daughter would do that [pose nude for Playboy] inside the magazine, although she does have a very nice figure. I’ve said if Ivanka weren’t my daughter, perhaps I’d be dating her.” — The View, 2006 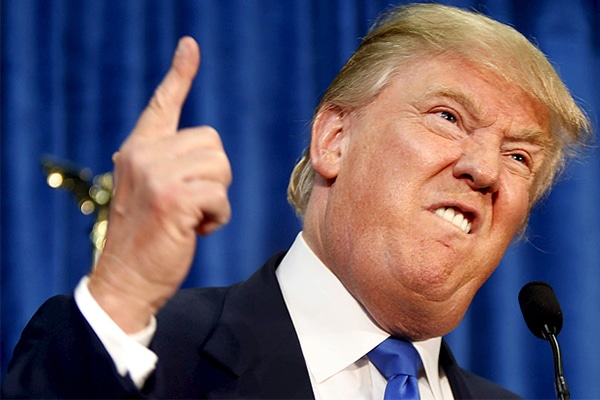 “Sorry losers and haters, but my IQ is one of the highest — and you all know it! Please don’t feel so stupid or insecure; it’s not your fault.” — Twitter, 2013

7. On sexual assault in the armed forces 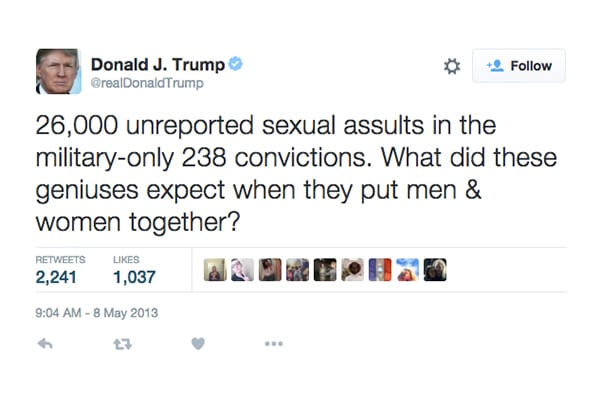 Hmmm, because creating segregated workplaces is clearly the answer to sexual assault.

8. On being hounded by the media 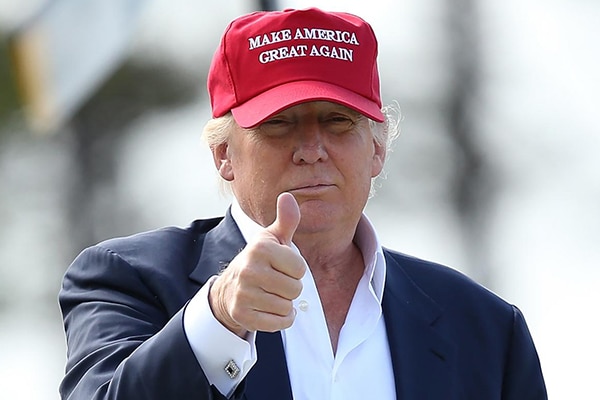 When asked about the media following him and generating false accusations in a 1991 interview with Esquire, Trump replied, “You know, it doesn’t really matter what [the media] write, as long as you’ve got a young and beautiful piece of ass.”

Turns out beauty really is speculative.

9. On Hillary Clinton’s ability to run the US 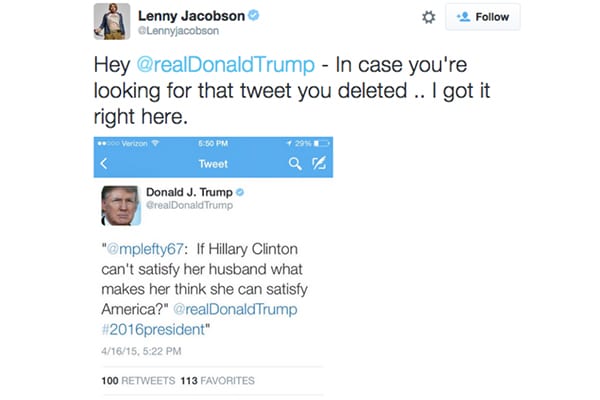 I think we’re all glad @Lennyjacobson found this one again. 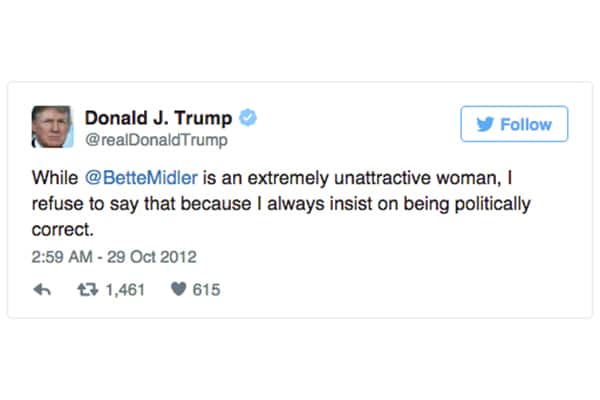 Unfortunately Mr Trump, since you’re going into politics, you do have to be politically correct. 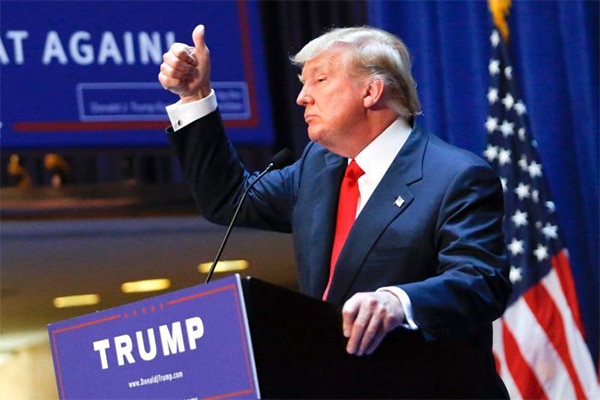 “When you look at Paris, toughest gun laws in the world, nobody had guns but the bad guys. Nobody had guns. And they were just shooting them one by one, and then they broke in and had a big shootout and ultimately killed the terrorists…And I will tell you what — you can say what you want, if they had guns, if our people had guns, if they were allowed to carry, it would have been a much, much different situation.” – CNN 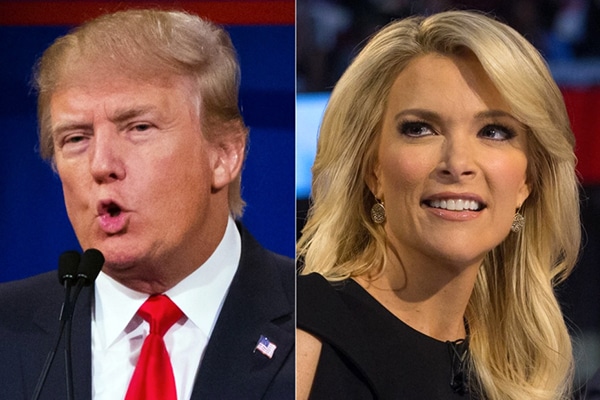 After Fox reporter Megan Kelly questioned why Trump called women he didn’t like “fat pigs, dogs, slobs and disgusting animals,” the tycoon fought back in an interview later that day claiming Kelly, “had blood coming out of her eyes, blood coming out of her wherever”, suggesting the reporter was menstruating and subsequently unable to form an intelligent opinion.

Trump was clearly running out of ideas when he tried to shoot down Hillary Clinton on grounds that she was wearing a wig, after being asked about her appeal to voters.

“Well, she has a new hairdo, did you notice that today? I tell you what, it really was shocking to see it, because you’re right it must be [a wig], it was massive. Her hair became massive.”

Interesting speculation from a man whose own hair has topped several lists as the world’s worst excuse for a toupee.