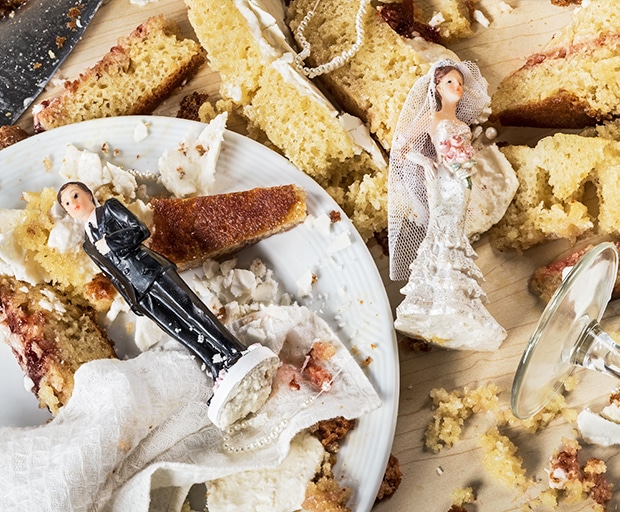 There are plenty of reasons to stay – and one HUGE reason not to.

No one gets married thinking they’ll one day get divorced. Or at least, no one is supposed to go into marriage expecting to get divorced.

Even with the divorce rate perpetually hovering around 50 per cent, we all think we’ll end being one of the ones who makes it.

But the truth is, many of those 50 per cent of couples who stay married aren’t staying married because they’re happy. They’re staying married because they’re afraid of getting divorced. Maybe they fear it’ll be hard on their kids, or they’re financially reliant on their partner, or they have a lot of property in common and don’t want to lose it. Maybe their families will disapprove, or their religious standpoint says divorce is wrong. There are lots of reasons to just stay married, even if you never have sex, fear you’ve lost your identity, or just think being married sucks.

There’s also a huge reason NOT to stay married: because you know in your heart that you’ll be happier and better off on your own.

And once you’ve had that big ‘aha moment’ and decided to leave, there’s generally no going back. If you’re there, or you might be getting there, here are some things to think about, that you probably haven’t considered…

1. Leaving can be just as hard as being left; no one wants to be the bad guy.

2. You won’t just lose your spouse, you’ll lose your in-laws, too. (Note: this might not be a bad thing.)

3. Your friends may start to treat you differently – especially your married friends.

4. You’ll feel like a failure (at least some of the time).

5. You’re likely to end up having the same problems with a new partner.

6. Second (and third) marriages have a higher divorce rate than first marriages.

7. You’ll essentially be trading one set of problems for another. (Single life ain’t all fun and games.)

8. If you have kids, you’ll always be part of each other’s lives, even after you split.

9. Your kids will feel the impact of your divorce forever.

10. The financial implications of divorce go further than you bargained for. (Have you seen Trump’s tax plan for single parents?)

11. You’ll discover a whole new side to certain so-called friends – and appreciate your truest friends even more.

12. Getting divorced is a very brave thing to do.

13. And being divorced is A LOT better than being in a miserable marriage.

Comment: Are you divorced? What took you by surprise about the process?