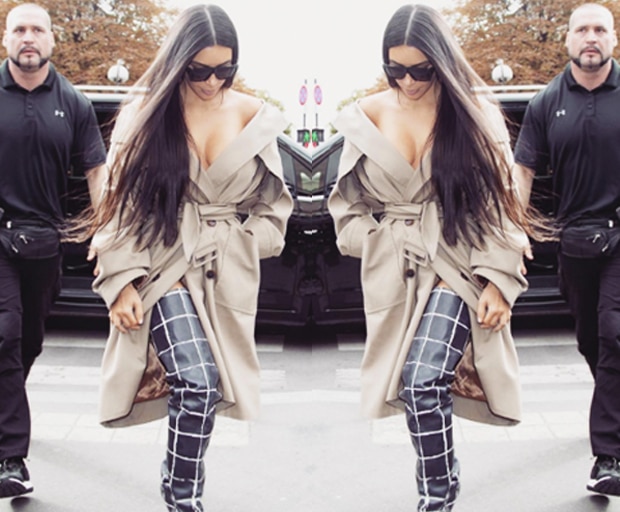 Emily Blunt Thinks She Looks Awful In Her New Movie

More and more disturbing information is emerging about the shocking event.

In case you’ve been hiding under a rock, you probably know by now that arguably the world’s most famous woman, Kim Kardashian West, was shockingly attacked in her Paris apartment while staying in the city for Paris Fashion Week this week.

But you may not have all the info yet. Like how the thieves managed to get away, or what exactly the reality star’s security team were doing at the time of the intrusion, and as more details emerge about the crime, there’s plenty of disturbing facts coming to light. Here’s what you need to know…

1. The intruders got in by dressing as police and restraining the doorman.

Around 3:00a.m. local time, Sunday night, five masked men disguised as police officers entered the exclusive apartment at the Hôtel de Pourtalès, where Kardashian was staying during Paris Fashion Week, after threatening the doorman with a gun and handcuffing him.

2. Kim feared she may be raped.

According to police reports, Kardashian West was laying in bed with her robe on when she heard footsteps making their way up the stairs of the apartment she was staying in and immediately tried to call her bodyguard, Pascal Duvier, but one of the men is said to have snatched the phone from her before the call could go through, then grabbed her by the ankles, which is the moment the reality star reportedly told police she was convinced she was about to be raped.

3. She was bound and gagged in a bathtub.

According to a report from TMZ and a statement released by Luc Poignant, a spokesman for a police officers’ union, the KUWTK star was bound and gagged by the masked intruders before being forced into the apartment’s bathtub and locked in the bathroom.

4. Kim begged for her life in the bathroom.

A source close to the Kardashian family has said Kardashian West “begged” her attackers not to kill her, pleading that she had “babies at home”.

5. Kim’s friend was also in the apartment at the time.

The 35 year-old reality star’s friend and stylist, Simone Harouche, was also in the apartment at the time of the intrusion. Harouche is reported to have been in the room downstairs when she heard the men enter and ran and locked herself in the downstairs bathroom.

“By the time [Kim] escaped Simone had heard noises. She was downstairs and called Pascal not knowing what was going on asking if everything was okay,” a source told People.

6. The thieves made out with over $11 million worth of Kim’s items.

Though the details of all the items taken by the thieves haven’t yet been confirmed, sources have claimed among Kardashian West’s stolen property included her $4 million 15-carat Lorraine Schwartz diamond engagement ring, a jewelry box containing valuables worth an estimated $5 million, and cell phones, which contain private data on the star likely worth many times more than all of the jewelry.

“The haul amounts to several million euros, most of which is jewelry. We’re still trying to establish the exact amount stolen,” a police source told Agence France-Presse.

It’s believed the robbers were after Kardashian West’s expensive new diamond ring in particular, with TMZ reporting they only spoke French, but kept repeating “Ring! Ring!”.

7. The intruders escaped on bicycles.

Shockingly, despite wearing balaclavas – not a part of the police uniform – and running from the apartment with several million dollars worth of stolen goods, police reports have confirmed the robbers managed to flee the scene of the crime on bicycles.

8. Kim’s bodyguard was just footsteps away in a nearby apartment with her sisters during the attack.

Kardashian West’s bodyguard, Duvier, who tackled a perve trying to sexually assault the star in Paris earlier in the week, is said to have been taking care of her two sisters, Kourtney and Kendall at the time of the intrusion.

“It wouldn’t be that strange for Pascal to be dispatched to be with Kourtney or the other family members once Kim was ‘safely’ in her residence. And he regularly provides security for the whole family – not just Kim,” a source told People magazine.

This guy is always in my shot!

9. Kim was hysterical when she rang Kanye after the attack.

“Kim was terrified. She was just hysterical when she talked to Kanye. He said she was really upset and it took him a few seconds to understand what she was saying to him,” a source said.

“He wanted to get to her as soon as he could. He told her that he couldn’t care less about the jewelry; he’s just thankful that she’s okay.”

“Phones are extremely rich with data. Most people have contacts in their phones and apps that open directly into banking accounts, travel accounts, their calendar, schedule, etc. It’s a lot of information that can be used in various ways. To the degree that robbers could see it or use it depends on how much security she had,” National Cyber Security Alliance executive director Michael Kaiser told FOX411.

“Most people would be using the Find My Phone or Wipe My Phone feature, which would wipe that information off as quickly as possible. If she has been using a biometric such as a finger swipe to access her phone, that could provide levels of security. But a very sophisticated cyber-criminal could get that information off the phone.”

11. Kanye West and Kim have returned to their NYC apartment, but feel helpless.

Kanye and Kim Kardashian West reunited soon after the incident back at their NYC apartment after Kanye heard the news of his wife’s harrowing experience and abruptly cut a concert short mid-performance to be with her. However sources close to the family say West now feels “helpless”.

“Kanye says that it has been one of the hardest days of his life, that he feels helpless,” the source told People magazine.

“This is a guy who isn’t used to feeling helpless at all. He’s usually in control. And now he realizes that he could have lost her, and there wasn’t a thing he could do about it.”

12. French authorities may suspect an inside job.

According to entertainment site, Page Six, French authorities suspect the attackers received insider information to alert them when Kardashian West was alone.

“French police suspect that the five alleged robbers had some contact with her security and were tipped off about her procedures. They knew there was no security [with her inside her apartment that night],” a source told the site.

“All they had to do was go in, make contact with someone inside the hotel. They have issues with the story of more than one worker at the hotel. They are also talking to bodyguards who worked with her earlier in the week.”

13. One of Kim’s ex-bodyguards also thinks the attackers received information on Kim’s movements from someone close to the family.

Former Kardashian bodyguard, Steve Sanulis believes someone close to the family, who would have had knowledge of Kardashian West’s trip to Paris and hotel accomodation, could have orchestrated the attack.

Stanulis, who was sacked by Kanye West after allegedly getting too close to Kardashian, also said Kardashian West may have left herself vulnerable as a result of her husband not being as tight with her security measures as he could have.

“When I worked with them, Kanye would ask me to walk 10 feet behind him, which makes it so hard for anyone working their security to do anything if someone lunges at them. There was numerous times he’d try to ditch his security. He’d jump in a car and tell me to take a taxi.”

14. The mayor of Paris has condemned the attack.

Paris mayor, Anne Hidalgo, has vowed to find the theives who infiltrated Kardashian West’s hotel apartment and reassure their citizens and tourists that the capital is safe.

“I condemn the attack Kim Kardashian suffered last night in her hotel,” Hidalgo said in a statement.

“She has my support and will always be welcome here in Paris. I have full confidence that the police force, as part of their investigation, will quickly identify and apprehend the perpetrators of these acts.”