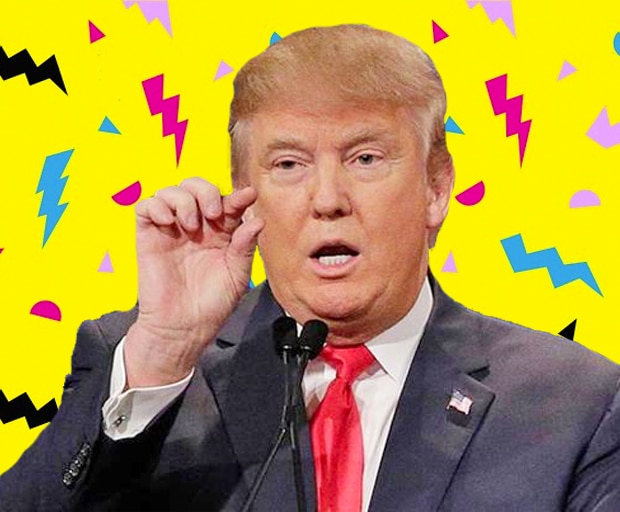 I Can’t Wait For Millennials To Destroy Everything

All the times he referred to women as dogs…

Donald Trump’s presidential campaign is looking more and more like a big joke; practically asking Russia to spy on the US, yelling at babies, and seeming to covertly encourage gun enthusiasts to assassinate Hillary Clinton are just a few of the punchlines that had me wondering if the past year has in fact all been part of one giant gag.

But sadly, it isn’t a joke. A frightening number of people are actually taking him seriously – like the folks in a recent focus group who called for guns in bathrooms – making his words not just ridiculous, but dangerous. And as women, we’re particularly at risk from his brand of idiocy. Here are 23 of the most offensive things he’s said about women, lately and over the years.

1. The time he was really creepy when asked about his daughter

“I’ve said if Ivanka weren’t my daughter, perhaps I’d be dating her.”

2. The time he belittled a female 9/11 survivor

3. The time he insulted a breastfeeding mother

“You’re disgusting.” (Said to a lawyer who asked for a break to pump milk for her baby daughter.)

4. The time he overestimated his allure

“All of the women on The Apprentice flirted with me – consciously or unconsciously. That’s to be expected.”

5. The time he tried to claim women belonged to him

“I think the only difference between me and the other candidates is that I’m more honest and my women are more beautiful.”

6. The time he was seriously deluded about his role in destroying sexism

“Number one, I have great respect for women. I was the one that really broke the glass ceiling on behalf of women, more than anybody in the construction industry.”

7. The time he called a female TV host’s looks into question

“If I were running The View, I’d fire Rosie O’Donnell. I mean, I’d look at her right in that fat, ugly face of hers, I’d say ‘Rosie, you’re fired.'”

8. The time he insinuated rape was inevitable when men are left alone with women

“Twenty-six thousand unreported sexual assaults in the military, only 238 convictions. What did these geniuses expect when they put men and women together?”

9. The time he went after a female media personality for her looks, again

“We’re all a little chubby but Rosie’s just worse than most of us. But it’s not the chubbiness — Rosie is a very unattractive person, both inside and out.”

“Ariana Huffington is unattractive, both inside and out. I fully understand why her former husband left her for a man – he made a good decision.”

11. The time he referred to a woman as a dog

“Robert Pattinson should not take back Kristen Stewart. She cheated on him like a dog and will do it again – just watch. He can do much better!”

12. The time he tried to say being a woman was a political advantage

13. The time he proved, yet again, a woman’s looks are all that matters to him

“How much money is the extremely unattractive – both inside and out – Arianna Huffington paying her poor ex-hubby for the use of his name?”

“It’s certainly not groundbreaking news that the early victories by the women on The Apprentice were, to a very large extent, dependent on their sex appeal.”

16. The time he acted like a highscool bully when speaking about a fellow political candidate

“Just remember this: she was an unbelievably nasty, mean enabler.” (On Hillary Clinton.)

17. Then reminded us, once again, that women are essentially just pieces of meat to him

“You know, it really doesn’t matter what the media write as long as you’ve got a young, and beautiful, piece of ass.”

18. The time he suggested a woman on her period couldn’t possibly form intelligent thoughts

19. And reminded us all women are dogs to him

“She is a dog who wrongfully comments on me.” (On Arianna Huffington, again.)

20. The time pointed out his rival’s flaw was the fact she was born a woman

“Can you imagine that, the face of our next president? I mean, she’s a woman, and I’m not supposed to say bad things, but really, folks, come on. Are we serious?” (On former rival Carly Fiorina.)

21. The time he suggested women who get abortions should be treated like criminals

“There has to be some form of punishment.” (His opinion on women who have abortions.)

22. The time he referred to women as ‘girls’

“And the girls – we’re supposed to call them women, but they’re girls to me.”

23. And the time he was yet again creepy to a female contestant on The Apprentice

“It must be a pretty picture, you dropping to your knees.” (Said after after Brett Michaels described how contestant Brande Roderick had gotten down on her knees and begged not to be fired.)

Comment: What do you think is the worst thing Donald Trump has said about women?