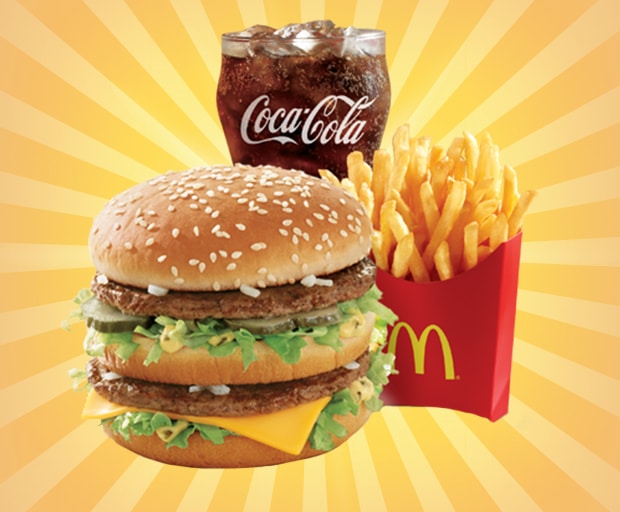 9 Ways Having A Baby Changes Your Sex Life

Although McDonald’s has copped a lot of flack over the years for promoting processed and unhealthy food, I have to admit a sneaky trip to McDonald’s from time to time is guilty pleasure of mine. At one stage my love was so strong, I actually made a conscious effort while travelling to eat at least one meal from the fast-food chain in every country I visited.

I’m ashamed to say I’ve now eaten McDonald’s in 16 countries. When I first started I assumed the menu would be the same worldwide. It was only during a stop in Berlin, Germany, where I was served a Magnum McFlurry that I became aware I’d been cheated by McDonald’s in my home land. Ever since then, I make a point of taking the time to see what unique options are available. And while these country by country faves aren’t for everyone (some are positively gross), they’re almost too bizarre not to give a go… 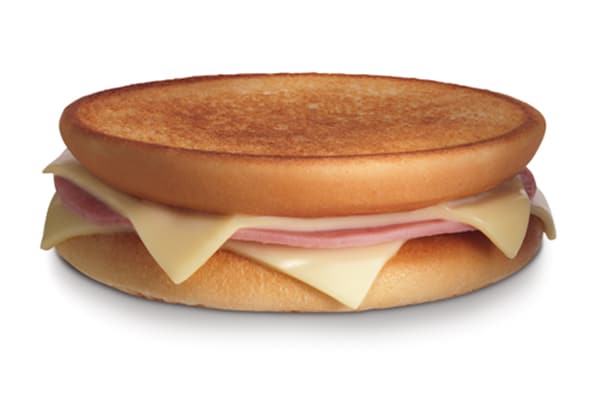 There is not much to the McToast, just ham sandwiched between two slices of cheese and an inside-out bun. However on closer inspection, it looks a little like plastic… 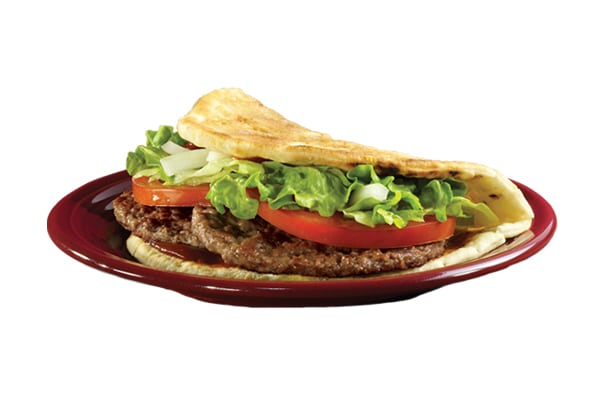 If you thought McDonald’s was famous for its burgers everywhere, think again. A flatbread focused Turkey fave, the McTurco is a pattie of beef or chicken with tomato and lettuce wrapped in flatbread. They have a very similar meal in parts of the Middle East as well but its named the McArabia. 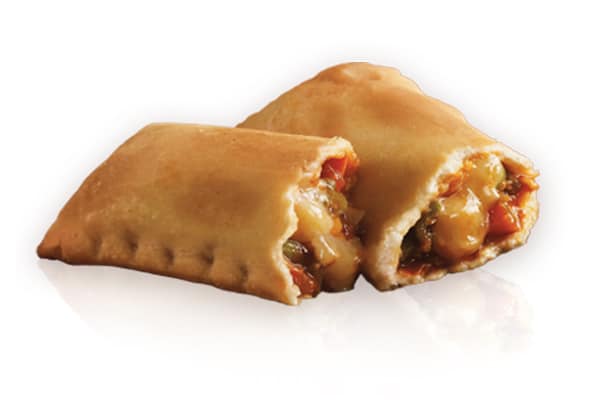 Sort of like a Hot Apple Pie gone savoury, this parcel of spicy vegetables is not a pizza or a samosa; it’s a Veg Pizza McPuff, and if you can say its name with a straight face, you should probably get a medal. 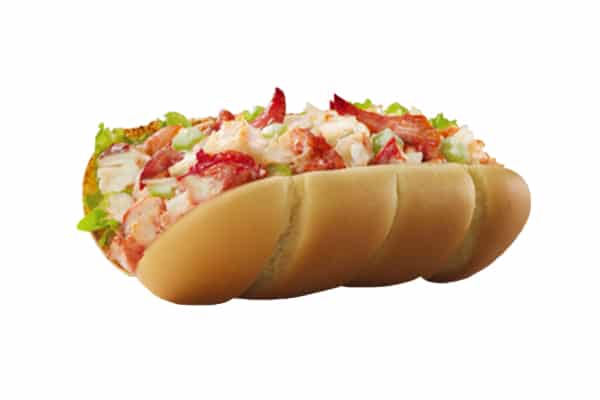 I love lobster and I love sandwiches, but you couldn’t pay me to eat a lobster sub. Especially one from McDonald’s. 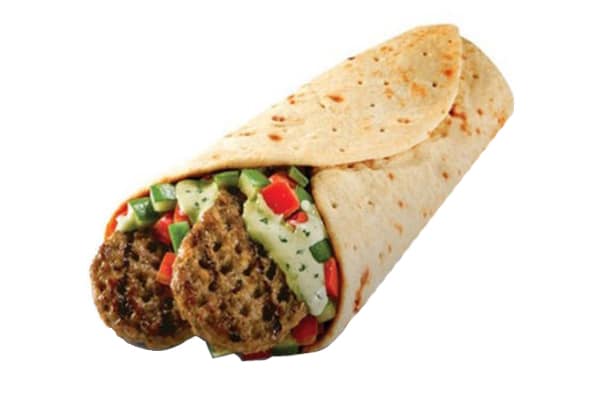 Who knew McDonald’s did kebabs? If you’re a fan of perforated processed meat and cubed vegetables, then this is a must-try next time you’re in Israel. 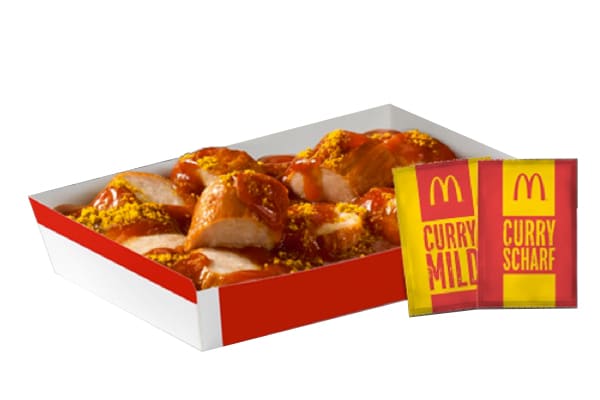 The Germans are famous for their currywurst creations and their legendary sausages, so this meal shouldn’t really be a shock to anyone. Whether you’re game to actually eat it though, is another thing… 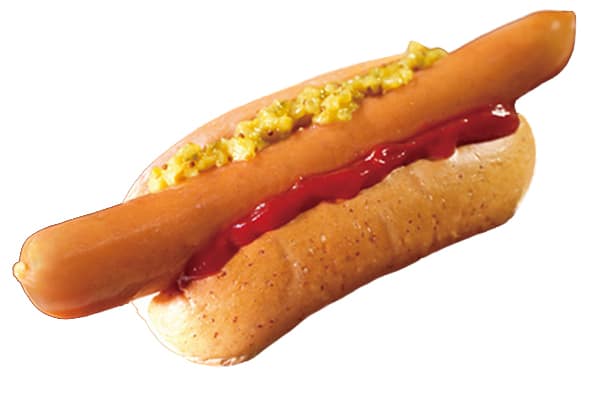 Yes, you read that correctly. These hot dog lookalikes didn’t come from the States and I guess that is why Japan got so confused and decided to serve this mega sausage on their breakfast menu… Also, what is that yellow stuff? 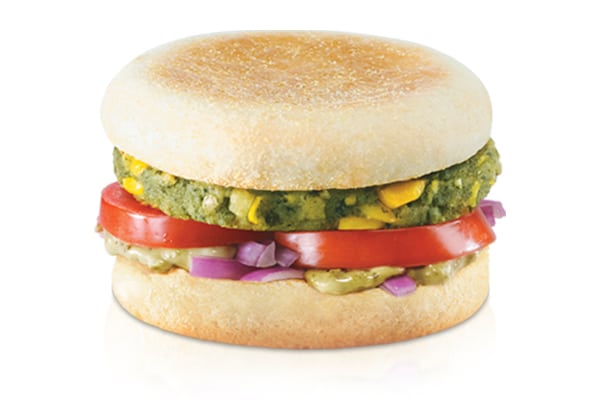 Vegetarians may actually rejoice when they discover this totally meat free burger with its oddly moss hued pattie. The rest of us, not so much. 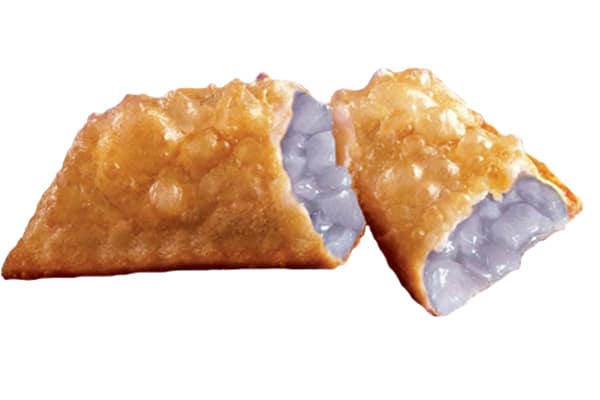 Nope that’s not a filter, taros are actually a purple Asian vegetable. So of course McDonald’s went and put them in a pie. Yum. 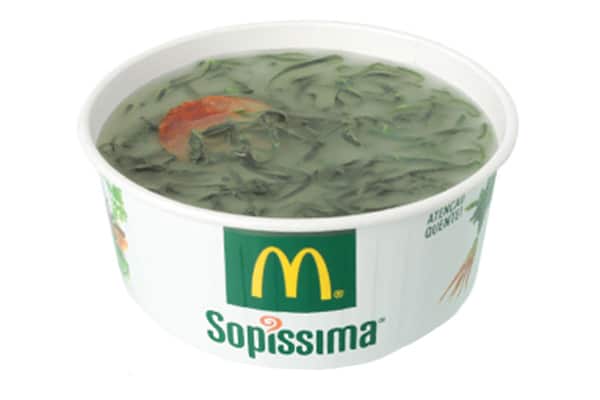 Just what you always wanted when ordering drive through at McDonald’s, ambiguous green soup filled with floaty things. 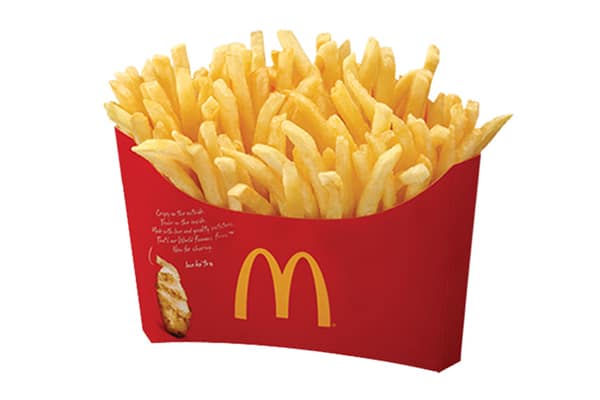 Aww, bless their cotton socks, we love this idea. An extra large box of chippies for you and BFF to share, or, if you’re like most people, a thinly veiled excuse to order yourself enough food for two people. 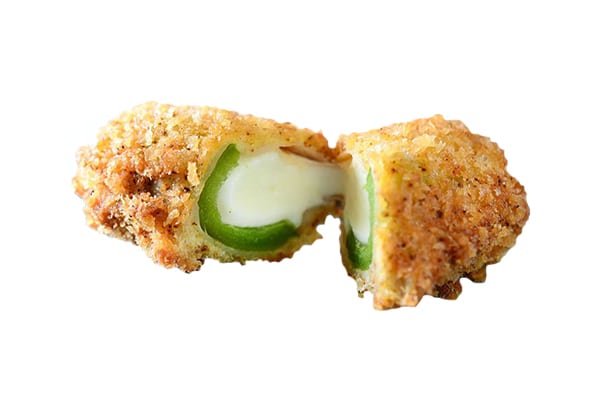 Basically these little poppers are just deep fried nuggets made of cheesy chilli. Sounds delicious if you ask me. 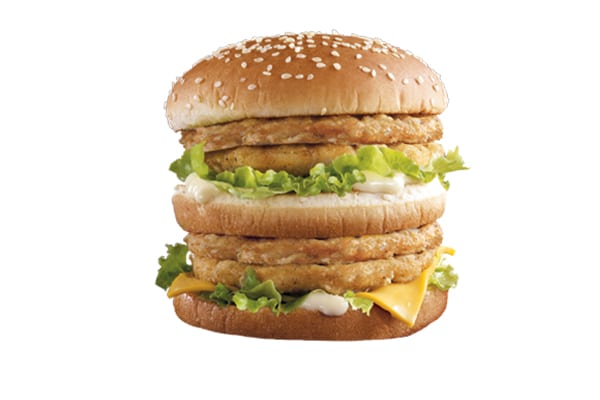 This is taking the McChicken to a whole other level, with four chicken patties, added cheese and an excessive amount of mayo. All it needs is a set of defibrillators. 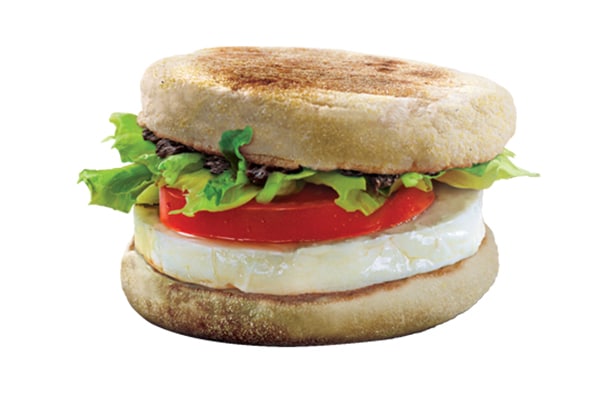 Halloumi lovers of the world, unite! This one is for you with a big slab of halloumi wedged into your breakfast roll. What more could you want? 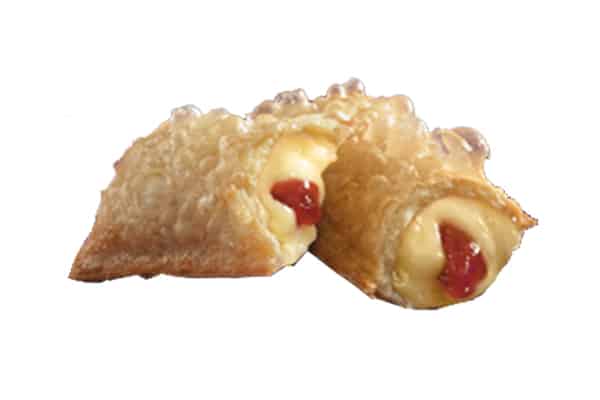 Sort of like a Hot Apple Pie, sort of like a gross oozing dessert, the Strawberry Custard Pie may be a fave in UAE, but it’s probably going to be a big fat ‘pass’ for the rest of us. 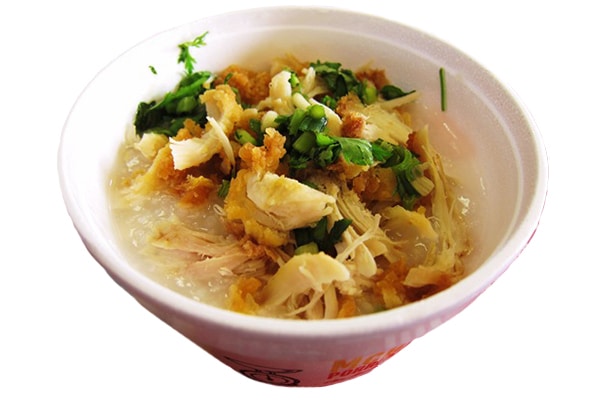 The McD Chicken Porridge is made from a rice soup known as congee, with McChicken pieces, onions and coriander thrown in. 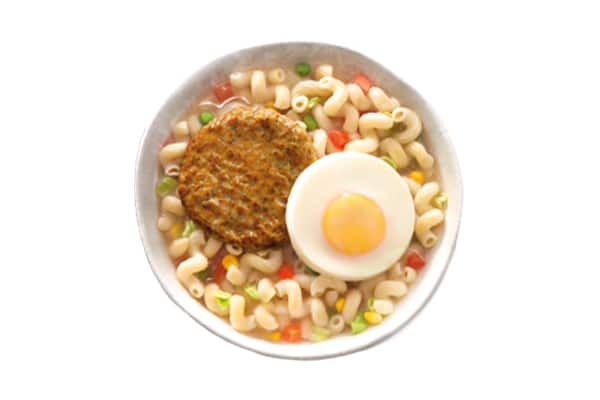 If you like your sausage in pattie form and your vegetable pasta topped with a giant egg, you may have just found your perfect meal. If you’re a little hesitant, there’s always a grilled chicken or ham pattie option instead. 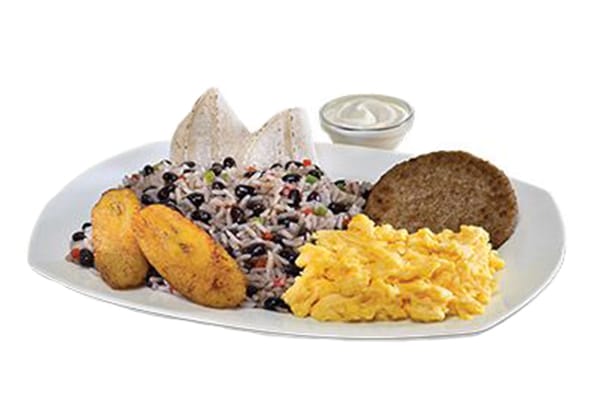 Scrambled eggs, mayonnaise, deep fried goodies, tortilla wraps, rice with beans and a meat pattie. Good one McDonald’s, that’s just what I felt like for breakfast. 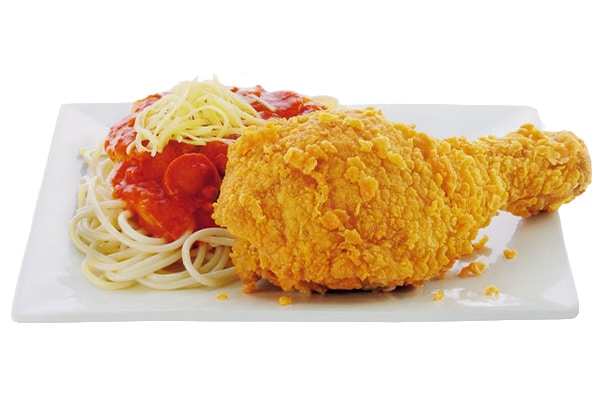 This odd mix is like an Italian KFC hybrid meal, served with a monstrous crispy chicken drumstick and topped off with a rich tomato sauce. 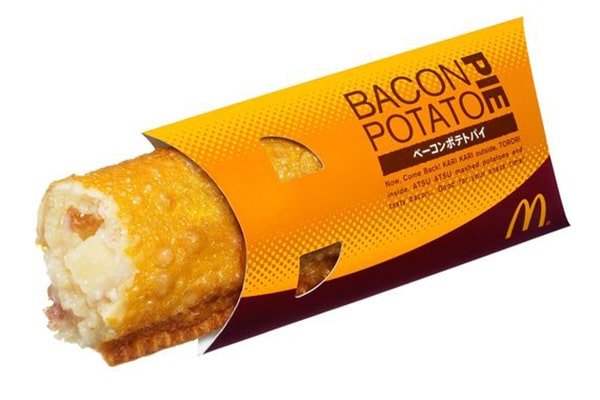 Don’t be deceived by what you see. Although this may look like deep fried potato mash with barely discernable cubes of processed meat in it, it’s actually a bacon potato pie. 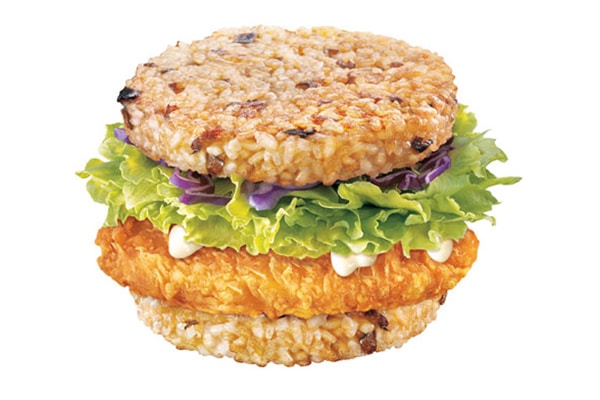 Good news for celiacs, there’s not a scrap of gluten to be seen in this burger formed completely out of rice. Just a quick trip to Singapore and you’ll be satisfied. 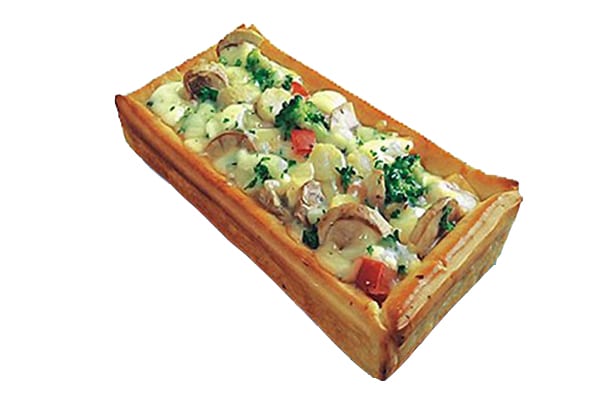 While it looks semi decent in this photo, doesn’t every McDonald’s product? You can just imagine the curry being cooked in some ridiculously big pot, only to be scooped out and slapped into the pastry pan. 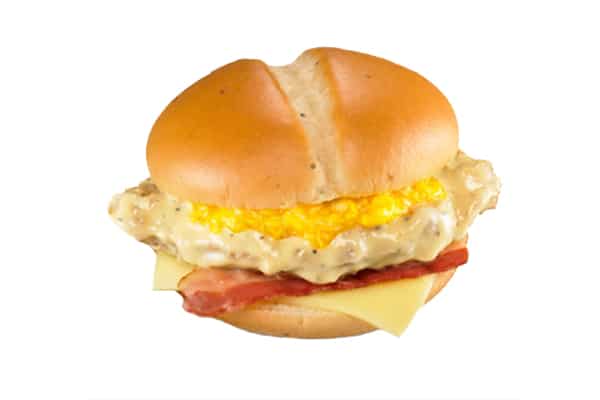 Bacon, cheese, eggs and a fried chicken breast coated in a creamy sauce, if you’re looking for a heart attack, search no further.

Allergy Shaming Is A Thing, And It Needs To Stop

These Unexpected Foods Can Make You Sick