And you shouldn’t either.

Like most people, up until five years ago, I guzzled milk every day; in my morning coffee, my breakfast cereal and in my nightly bowl of ice-cream (which is basically frozen milk).

That was until I discovered one of the most sadistic and violent industries in the world: the dairy industry. You may be shocked to learn milk production involves rape (yes, rape), murder and unspeakable cruelty.

I know what you’re thinking. Milk, cruel? Never! Cows live on farms where they munch on fresh grass all day until they’re milked. They were going to make the milk anyway, so what’s the big deal if we take some?

If you think any of the above, you’re sorely misinformed. Here’s how your milk and its byproducts (cheese, ice-cream and yogurt) really get made…

Stop for a moment and consider why cows actually make milk. If you guessed it’s for the same reason humans do, you’re right. Female cows start producing milk once they’re pregnant in order to feed their new baby calf (and fatten it up – another reason humans don’t need cow milk).

Just like a female human, if a female cow isn’t pregnant she won’t produce plentiful quantities of milk. In order to ensure each cow delivers maximum milk for the farmer’s buck, female cows must be regularly forcibly impregnated, done using a ghastly device known as a ‘rape rack’. Female cows are forcibly impregnated over and over until their weary bodies can no longer carry a baby and their udders are painfully stretched out, at which point they’re no longer useful so they’re sent off to be killed.

2. Mothers have their babies taken away.

Are you a parent? Think for a moment what it’d be like to have your baby ripped away from you. Can you imagine anything more primally painful?

Well, if you’ve joined the dots by now, you’ve probably figured out that if the new baby cow is drinking her mother’s milk, there’s not going to be any to make that delish slab of cheese you need every Saturday night with your wine. So to ensure we can keep indulging in ice-cream and chocolate milkshakes, baby cows are often ripped away from their mothers and killed, and that’s how we get veal.

If you think they’re just dumb cows so why would they care, you need to school yourself on animal physiology. Cows are one of the most maternal creatures around, so much so that studies have found cows’ cortisol levels (that’s the stress hormone) spike dramatically when they’re separated from their herd. Research has also found mother cows use a set of distinctive maternal calls to cry out for their babies when they are out of sight.

If you’re a mother who’s breastfed, chances are you’ve suffered mastitis, a result of a blocked milk duct that causes incredibly painful, inflamed nipples and pus growth. Thankfully you were likely able to rest and treat it.

Mother cows aren’t so lucky. Up to three times every day, they’re hooked up to milking machines that are designed to extract milk at an efficient rate, leaving most of them to endure painful mastitis, which is re-aggravated over and over again with the machines. Though proper checks can slightly reduce this from occurring, the sheer volume of cows being milked at any one time and the speed at which a dairy factory needs to run means most suffer in silence. The result? Pus discharge in your milk. 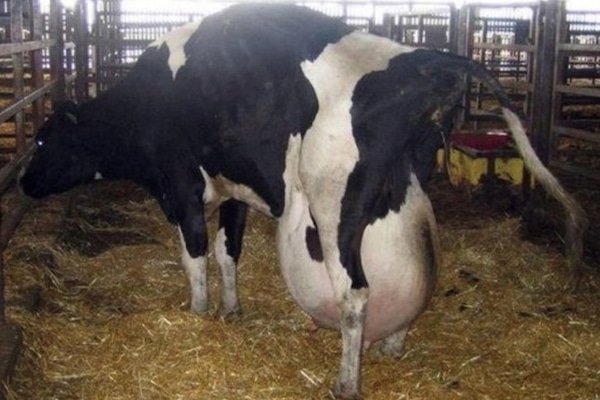 Wait – that would never be allowed, right? Wrong again. According to the FDA, cow milk can legally contain up to 750,000 somatic cells (pus and bacteria) per milliliter. FYI, there’s no pus in soy, rice, almond or plant milk.

4. Cows are made to starve.

It’s true that many farms have nice conditions for cows when they’re not being raped or hooked up to milking machines to suffer painful mastitis after having their newborns taken away from them. But what happens to dairy cows when they’re no longer viable for milk production? They’re shipped off to an abattoir to be killed and become your steak.

Because they’re going to be killed anyway, many farmers save a buck by no longer feeding them or providing them with any water in the final 30 hours of their life – a completely legal, common practise. As you might imagine, starved, dehydrated animals don’t have a lot of energy to move, so getting them in and out of transportation vehicles can be a struggle. As such, many transporters resort to tactics like breaking their tails, poking them in the eyes with hot irons and beating them with metal bars in order to get them onto the truck.

Put all the horrific cruelty that goes into dairy farming aside for a second and consider how we’re able to keep producing such massive volumes of dairy products; your glass of milk is not without its costs.

On top of the devastating impact dairy farms are having on global warming are the billions of gallons of water it takes to keep the industry running. It takes about one-thousand gallons of water to produce just a single gallon of milk. In order for the world’s cattle and dairy farms to keep growing, two acres of rainforest are cleared worldwide every second, a leading contributing factor to the extinction of hundreds of thousands of animals.

If all that’s not sickening enough, consider the impact our so-called ‘need’ to have an endless disposal of dairy products has on those less fortunate; 82 per cent of starving children live in countries where the available food is fed to cattle, because we “could never imagine going without cheese”.

So do yourself a favor on World Milk Day and get educated about the industry you’re supporting.

Cowspiracy, an eye-opening documentary that broke ground on the cost of cattle products at the time of its release in 2014, is a great place to start.

As a side note, I’ve been dairy-free for five years now and my calcium levels have never been better (vegetables are actually one of the best sources of calcium). My digestion is great, my skin is clearer than ever and, more importantly, so is my conscience.

Comment: Do you consume dairy products? Will you be going dairy-free after reading what really goes on behind the scenes?