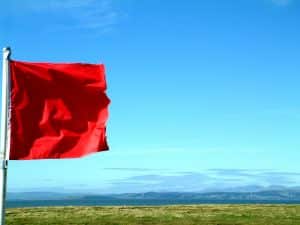 Is he a stayer or a player? Here are five red dating flags that can tell you if he is The One from the girls behind The Little Black Blog of Big Red Flags, www.bigredflagsblog.com

Created and edited by three twenty-something women in Los Angeles, The Little Black Blog of Big Red Flags provides a place for all those dating warning signs you totally spotted but chose to ignore.

While the site began with just the editors’ red flag stories about ex-boyfriends—and guys they were currently dating—it’s now an updated-daily collection of men and women’s most revealing stories, which readers can submit right on the site.

He thinks you belong on a shelf.

Someone once told us that women should reconsider graduate school because, when we continue to educate ourselves the smaller our pool of eligible men becomes. You’d be surprised how many men don’t value the opinions of their partners.

Story: After saying something I thought was pretty funny, my date told me—without the slightest hint of a smile— “Look, your job is to sit there and look pretty.”

You start dating a new man. You really like him. And then your gal pals take it upon themselves to inform you he’s not the great guy you’re claiming him to be. Ladies, ladies: When your close friends sit you down and tell you you’ve changed for the worse since dating a new guy, don’t get all defensive. Believe them.

Beware of the ownership syndrome.

Just because you are his girlfriend doesn’t mean he has the right to cup your breast or spank your bum any time he feels like it.

Story: My ex-boyfriend used to slap my butt in public, despite my clear demands that he refrain from doing so. In fact, when I’d tell him to stop, he’d get mad and tell me that I was too uptight. No, no, I just don’t want you to spank me in line at the coffee show—or in front of my parents for that matter.

Once a cheater—always a cheater.

Although we aren’t huge fans of sweeping generalizations, this is one cliché our mothers imparted upon us that has proven itself time and time again. Like, if a guy cheats on his fiancé to be with you, and later confesses to cheating multiple times prior to that, he’s probably not the man of your dreams.

What happened to chivalry?

Admittedly we all forget our manners every now and again, but there’s nothing worse than a date that does not introduce you to the people he’s mingling with, especially when you are standing beside him the entire night. (Then again, being introduced as a “friend” when you thought you were something more is much, much worse.)

Story: My live-in boyfriend and I were invited to an engagement party for one of his friends, which his ex-girlfriend would also be attending. When we walked through the door, there she was right smack in front of us with three other girls. No problem right? Well, after saying his hellos my then boyfriend took off into the party leaving me standing there alone to introduce myself, which was quite awkward to say the least.

Had a bad date?

Boyfriend from hell? Can’t believe the nerve of some guy? Head on over to The Little Black Blog to share your story—and read what others have experienced.

After reading thousands of questionable dating stories, and having not made the best decisions in the past, we believe in the power of telling it like it is—to our friends, to each other, and most of all to ourselves. Now, we’d like to help you be honest with yourself as well. Not sure if the guy your dating has committed a red flag or not? Want to know which red flags are deal breakers and which should simply be noted?

If you are interested in hearing it how it is send an email to bigredflags@gmail.com with your relationship questions and The Little Black Blog editors, Natasha Burton, Julie Fishman and Meagan McCrary will answer them every month in SheSaid’s advice column.

Looking for love? Check out Oasis Dating and chat to thousands of single guys. It’s free!