6 Food Ingredients You Should Be Terrified Of

If it’s in jet fuel, shouldn’t you think twice about putting it in your body?

Whether you’re trying to eat well, just doing your weekly grocery shop, or having a cheeky sweet treat, we all have to make choices about what we put into our bodies.

But what should be as simple as reading a packet turns out to be a massive task, because trying to figure out the cryptic code of a food ingredients label is like trying to find a dress in your size at a Zara sale.

Adding to that are all the ambiguous catch phrases splattered across the front of most packets – what, exactly, do they all even mean?! Is sugar-free the same as healthy? Is low-fat the same as no-fat? What exactly constitutes ‘natural’ anyway? It gets even harder given the fact some ingredients we know we should avoid have a thousand different names to make the tricker to spot, and some things don’t have ingredient lists at all, if you’ve bought them from a cafe or restaurant.

And it’s important to know what’s what, because some ingredients are actually really harmful to our overall health and can even lead to cancer or serious disease. So because navigating a grocery store is overwhelming enough already, we’ve compiled a list of six food ingredients to look out for and avoid when you next hit the aisles… 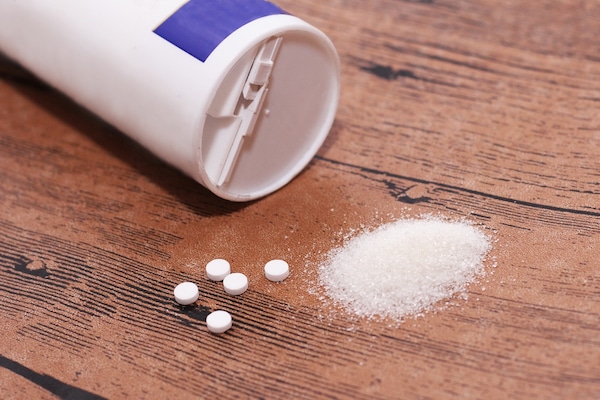 This sweetener is an alternative to sugar and is found in diet foods and drinks, chewing gum and sugarless treats. The main ingredients of aspartame are aspartic acid, which is produced by your body, and phenylalanine, which is an essential amino acid you get from food. It is FDA approved, recommending a maximum daily intake of 25 milligrams per pound of body weight. All of this, so far, sounds okay…right?

Well, several studies have been done on animals which determine there might be a link between consuming aspartame and developing cancer. A 2005 study exposed rats to the sweetener throughout their entire lives, and many of them developed lymphomas, leukemia and kidney tumors. A follow-up study from 2007 found the same results. A 2010 study additionally suggested aspartame directly caused liver and lung cancer in male mice.

Considering most people consume aspartame to cut down on their sugar intake to lose weight, the news that the sweetener might actually encourage you to go up, rather than down a dress size, is surprising, but Massachusetts General Hospital Department of Surgery doctor, Richard Hodin, found just that when he conducted a study which found a strong link between weight gain and aspartame.

“We found that aspartame blocks a gut enzyme called intestinal alkaline phosphatase (IAP) that we previously showed can prevent obesity, diabetes and metabolic syndrome,” he explained.

“So, we think that aspartame might not work because, even as it is substituting for sugar, it blocks the beneficial aspects of IAP.”

As an alternative to aspartame, you can use natural sweeteners like honey, maple syrup, agave nectar or fruit juice. These natural sugars should still be consumed in moderation, though, because they are still sugars. 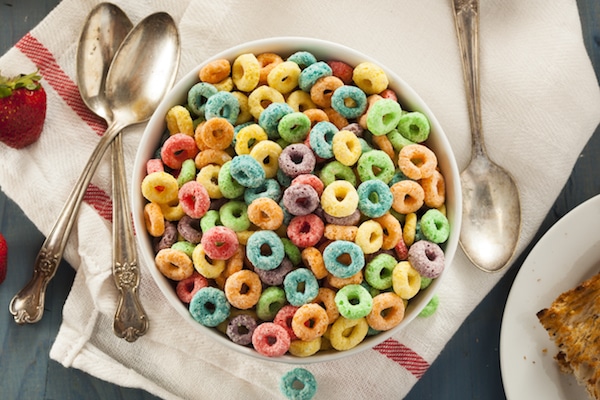 Whenever you open a delicious box of cookies, dip into a bag of potato chips or pour a big bowl of breakfast cereal, chances are you’ll be consuming butylated hydroxytoluene (BHT) or butylated hydroxyanisole (BHA).

These long and terrifying-sounding words are preservatives widely used in the food industry to prevent oils in food from going rancid and expiring. Oxidation can reduce the nutrients of foods, and so BHT and BHA are considered ‘antioxidants’, which sounds great in theory, but there’s controversy in the scientific community about the safety of the two preservatives. The FDA classifies the two as ‘generally safe’, which means they’re considered safe in specified amounts, but they don’t have to undergo pre-market review.

However, through a series of animal-based studies, the National Toxicology Program concluded BHA “is reasonably anticipated to be a human carcinogen”, and BHT was linked to an increased risk in cancer for animals. Because BHA and BHT are broken down and absorbed by the body, no one really knows how the two act longterm in the human body. Both BHA and BHT are used in jet fuel, rubber petroleum products, transformer oil and embalming fluid – oh, and your box of chocolate chip cookies. Some countries, like Japan and the UK, have already banned BHT in food products because of this.

BHT and BHA are hard to avoid, as they’re found in a wide range of packaged foods, though the good news is scientists have found an alternative in vitamin E, so with any luck, they may be phased out over time. In the meantime, you should avoid products that have these listed in their ingredients. 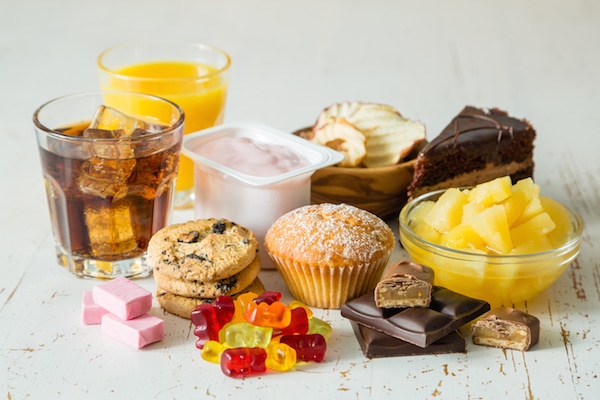 High fructose corn syrup is a cheaper alternative to real sugar made from genetically modified corn and processed with modified enzymes and is used in a huge number of foods and beverages. It is absolutely loaded with ‘unbound’ fructose and glucose molecules, and can cause tissue damage, obesity, diabetes, strokes, cancer and heart disease. Recent studies have even proven nearly half of tested samples of HFCS contained mercury. Yikes!

“Chemical contaminants used during manufacturing end up in the HFCS and in our food. What we know, for example, is that chloralkali is used in making high fructose corn syrup. Chloralkai contains mercury,” explains physician, Doctor Mark Hyman.

“It may not be a problem if we eat this occasionally, but the average person consumes more than 20 teaspoons a day of high fructose corn syrup, and the average teenager has 34 teaspoons a day. Over time, these heavy metals can accumulate in the body, causing health problems.”

On top of this, HFCS delivers sugar in such high doses it can actually become a toxin. During the chemical process used to make HFCS, the glucose and fructose – which are naturally bound together – are separated. This gives the fructose the opportunity to beeline straight to your liver once you eat it, which activates fat production and leads to a fatty liver, which in turn can lead to diabetes.

Aside from the massive list of health issues HFCS can contribute to, the main reason to steer clear of the manufactured sugar is because it is an indication the food you’re about to eat is, well, processed junk. If you want to enjoy a sweet snack, either add the sugar yourself naturally, or find food with plain old cane sugar on the label – try to avoid HFCS as much as possible. Your body will thank you for it. 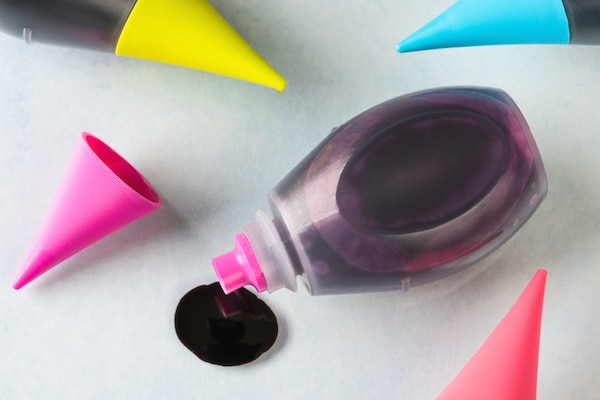 After finding the artificial “Red #3”, used to give products their bright hue, caused cancer in animals, the FDA banned it from being using in cosmetics in 1990, but it’s still permitted to be used in food – figure that one out. It can be found in chewing gum, strawberry milk powder, yogurts, cake mix, candy, ice-cream, baked goods, desserts and many other pink or red hued food products.

The FDA have banned 17 out of 24 synthetic dyes from being used in food, but for some reason, Red #3 keeps escaping the ban, despite the fact it’s been found to cause chromosomal damage and thyroid issues. Additionally, Red #40 has been found to produce lymph dysfunction in lab conditions, while Yellow #5 and #6 have also been linked to thyroid and kidney conditions, lymphocytic lymphomas, and chromosomal damage.

To avoid consuming these dangerous synthetic additives, your best bet is to choose foods with natural dyes like beta-carotene or annatto, or dye-free food. 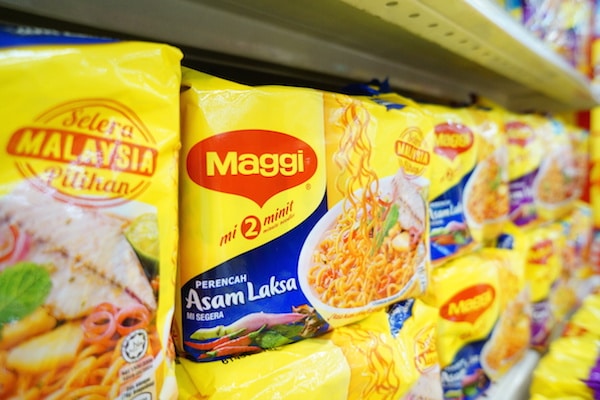 MSG has a bunch of different identities; monosodium glutamate, maltodextrin, sodium caseinate, autolyzed yeast, autolyzed vegetable protein, hydrolyzed vegetable protein, yeast extract, and even citric acid. This additive comes in more than 40 forms and can be found all across the grocery store ­– it is hidden everywhere, from canned soup and packet noodles to diet drinks, fast food and salad dressing. The reason it’s in so many products? It’s responsible for making our fave processed foods taste so darn good.

Unfortunately MSG is another additive the FDA has classified as ‘generally safe’, but its use remains controversial, largely because it has been linked to obesity. There is evidence that consuming MSG will make you gain weight even if you decrease your calorie intake, because it disrupts the relationship between the appetite and the metabolic hormone, leptin, in your body.

“It makes it so the body cannot properly process the energy it receives from food,” reinforces University of North Caroline nutrition expert, Ka He.

Some people also have short term reactions – called MSG symptom complex – to the additive, suffering from headaches, sweating, chest pain, nausea and other health complications. The best way to avoid these symptoms, and the potential of weight gain through leptin resistance, is to avoid foods containing MSG, which must be listed on the ingredients label, so it is easy to find. 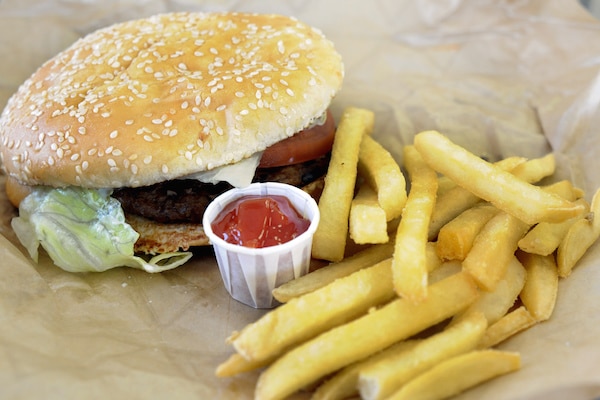 Trans fats are the ultimate bad guy to heart health and are considered by many health professionals to be the worst type of fat you can eat. They are used in foods because they’re cheap, increase the shelf life of products, and control the taste, but they can be a terrible thing for the people who have to actually eat the food. Trans fats are twice as hard for the body to break down and dissolve as saturated fat, and they boost bad cholesterol (LDL) and decrease good cholesterol (HDL) in our blood.

Another terrifying thing about trans fat is that products that contain less than 0.5mg of trans fat are legally allowed to carry a ‘trans-fat free’ label, even though that isn’t the case. For this reason, where it is listed, you should actively avoid foods containing trans fat, usually listed as ‘trans fats’ and ‘hydrogenated oils’. In a healthy diet, 25 to 35 per cent of your total daily calories can come from fat, but saturated fats should account for less than 10 per cent of that.

Images via Shutterstock and firstwefeast.com.

Comment: What foods do you avoid for your health?