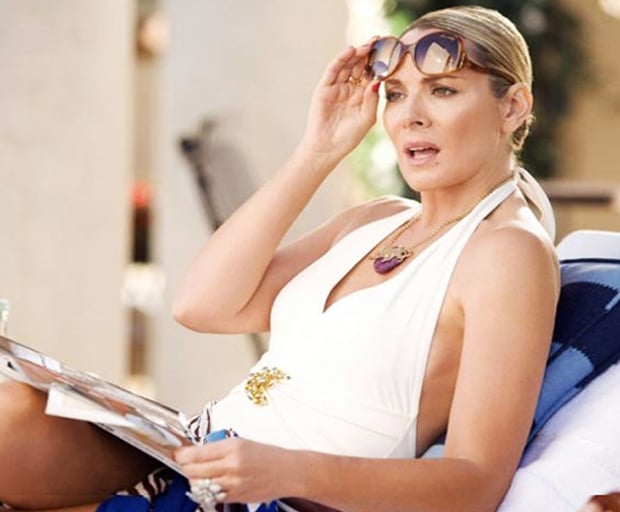 It might have been 15 years since the now-iconic New York Times best-selling relationship self-help book, Why Men Love Bitches was first published, but its premise remains just as pertinent now as it did back then.

Penned by relationship advice guru Sherry Argov, the book asserts that men are most attracted to strong, confident women who don’t take crap and know what they want. Argov explains being a ‘bitch’ needn’t be viewed negatively, but rather that a true ‘bitch’ is simply a woman who isn’t willing to compromise her standards in exchange for having a relationship.

Much like Sex & The City‘s Samantha Jones, a bitch is the perfect mix of assertive and cool, for these reasons…

1. She doesn’t get hung up on what other people think of her

Why Men Love Bitches (WMLB) really redefined the term ‘bitch’ to encapsulate the ballsy attitude of a self-confident woman who doesn’t waste her precious time or mental energy worrying about what other people think of her, stating: ‘Bitch (noun): A woman who won’t bang her head against the wall obsessing over someone else’s opinion – be it a man or anyone else in her life. She understands that if someone does not approve of her, it’s just one person’s opinion; therefore, it’s of no real importance.’

Argov goes on to highlight the importance of not defining yourself based off of the way a guy treats you until he’s truly earned a place in your life.

‘You should never care what a man thinks of you – until he demonstrates to you that he cares about making you happy. If he isn’t trying to make you happy, then send him back from “whence” he came because winning him over will have no benefit.’

2. She puts herself first

Who can forget that now infamous SATC scene where Samantha dumps Smith because she feels she’s begun to lose her identity to their relationship, telling him, “I love you, but I love more”?’

Maintaining your own identity and ultimately putting yourself first is at the very heart of WMLB.

‘Instead of working so hard to please him, work harder to please yourself…because ultimately, this is what will truly please him,’ argues Argov.

Relationship gurus have long asserted one of the most critical building blocks in any healthy relationship is mutual respect. In WMLB, Argov proposes that ‘nice girls finish last’ when they stay in relationships where they accept a lack of respect, either via allowing their partner to treat them poorly or simply failing to leave a toxic SO out of fear of being alone.

‘They simply don’t engage someone who doesn’t give it to them.’

4. She always stands up for herself

‘Standing up for yourself doesn’t always involve verbal confrontation. Sometimes it’s about not wasting energy on people who are negative,’ says Argov.

‘There is no way to hold your own in a relationship and simultaneously accept rude behavior.’

For this reason, a ‘bitch’ will always stand up for herself when a relationship is not meeting her needs, and in doing so, ultimately command a much higher level of respect from her partner.

Bitches understand that everything can’t be sugar-coated, all the time, and men respect women who give it to them straight, provided their feedback is delivered with tact.

‘You can get away with saying much more with humor than you can with a straight face,’ says Argov.

Samantha Jones was well-known for her ability to achieve this balance; always serving truth bombs with the perfect amount of sass and humor.

6. She plays by her own rules

No man wants a woman who is afraid to be her authentic self. Much like Samantha’s many famous diatribes in SATC about wearing, eating, and doing whatever (or whomever) she wanted, Argov asserts a true ‘bitch’ is a woman who openly dances outside the lines sometimes.

‘The bitch does not stop moving to her own rhythm… She isn’t afraid to define herself and defy public opinion. She has her own look. Her own style. Her own charisma. Her own brand of charm. A man wants something he doesn’t see every day. Not in terms of a redhead versus a blonde. He wants the rare woman who can think for herself.’

Comment: Do you agree with the idea that men love bitches?