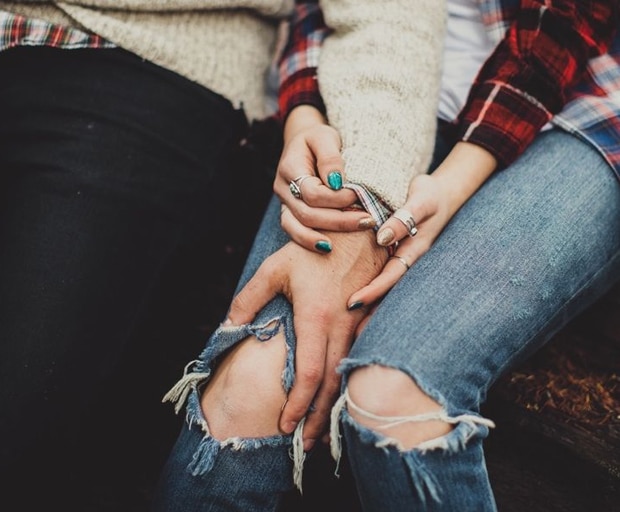 It’s never too late to try and get it right…

When you spend your days writing about relationships – how to make them work, when to end them, why we cheat, why we fall out of love – it’s easy to start questioning your own relationship, and all your ideas about how a romantic partnership should look. Talk to enough therapists and self-help experts, and you’re bound to hear conflicting theories on what love is supposed to look like and how to find fulfillment in your relationships.

Take the case of Lori Gottlieb, author of Marry Him: The Case for Settling for Mr Good Enough. She says many women are too picky, holding out for the perfect guy who never appears and refusing to settle for the ‘good enough’ man who would make a perfectly adequate husband and father. Gottlieb feels it’s better to be lonely in a marriage than lonely and single.

‘Having a teammate, even if he’s not the love of your life, is better than not having one at all,’ writes Gottlieb, explaining that marriage is often boring anyway, lacking in passion and feeling more like a small business than a love affair.

Enter Scott Carroll, a psychiatrist who wrote a book called Don’t Settle: How to Marry the Man You Were Meant For. He has a different take.

Not wanting to suffer this fate myself, I asked him what he thought about the question of settling versus not settling, and came up with this list of six things that often cause people to choose the wrong partner…

1. You were scared of ending up alone

Loneliness is the human condition. It’s perfectly normal, and okay to be lonely sometimes. But also, no one wants to be lonely. For women, it’s easy to get nervous after a certain age, worrying that if you haven’t found someone yet, you’ll never find him. And even Dr Carroll, the advocate of not settling, has to concede a point to Gottlieb here.

“She’s right that a woman’s marriage stock peaks in her early twenties and then goes downhill from there,” he says.

But wait! That’s not the end of the story…

“While she gets the statistics right, she forgets that you only have to get it right once; one person out of billions. Statistics are only useful if you are looking at large groups of people, not for individuals. Far too many women get discouraged by the statistics and never really try.”

2. You were blinded by chemistry

“Most people don’t have a good sense of what kinds of personality traits work well together, and instead focus on chemistry, which inevitably fades, or blows up in your face,” says Dr Carroll.

He warns that having too much chemistry can actually be dangerous. That’s because we each have our own ‘attachment style,’ which is largely determined by our childhood experiences and relationships with our caregivers.

“Certain attachment styles are super attracted to each other, but then these combinations produce dramatic fights and breakups,” says Dr Carroll.

When we don’t know what else to look for besides good chemistry, we can easily end up marrying the person who makes us crazy with desire – and that can drive us actually crazy in the end.

3. Your biological clock was winding down

If you wanted to have kids when you were on the hunt for Mr Right, there’s an even greater chance you settled for the wrong person. By the time a woman reaches her mid-thirties, the ticking of her biological clock grows louder and louder, until it finally shuts off sometime around age forty. But, says Dr Carroll, partnering up with someone just so you can become a mother isn’t always the best idea.

“Being a parent is even harder than being married. If your marriage doesn’t work out, you can always get divorced – but if you have children, you are basically stuck with him. Plus, your children are genetically half his, and then you’re stuck dealing with his negative personality traits in your children as well.” (This might be a good time to revisit the joys of the childfree life.)

4. You missed a red flag

We all think we know what our deal breakers are: the red flags that will stop us in our tracks and send us running in the other direction. But, says Dr Carroll, “Most women (and men) have no clue what are real red flags, and what things are merely preferences and minor annoyances.”

One way to figure out if you’ve missed a red flag that might come back to haunt you later is to invest in couples therapy before you get married – before you’re even having trouble.

“Odds are, one or both of you will need to go to therapy at some point,” is one of Dr Carroll’s philosophies about marriage. So, why not do it sooner rather than later, so you can find out whether there are fundamental problems that are going to cause trouble down the road?

5. You thought marriage would be amazing

Maybe you fell in love at first sight, and everything was smooth sailing after that. You had some conflicts, sure – but you resolved them easily and moved forward happily. You had a beautiful, fairytale wedding, and even though you wrote something into your vows about loving each other even during the hard times, you secretly thought it wouldn’t really apply to you. In short, you had no idea what you were in for. As someone who was married for 10 years, and who learned a few things during those years, Dr Carroll says I actually have an edge in this department.

“You don’t have the typical unrestrained fantasies of blissfulness about marriage that women who’ve never been married often have. You’ve been burned, and know that fire is hot, so you have a healthy amount of caution.” Amen to that.

6. You stopped believing in love

Get put through the relationship wringer enough times, and it’s easy to just give up on love. Giving your heart away and having it smashed to pieces isn’t fun; neither is going on date after date with perfectly nice guys who don’t make you feel anything at all, for no reason you can see. But Dr Carroll offers hope for those of us who are on the verge of throwing in the towel.

“My aunt found the love of her life when she was 62 years old. The lady I bought my house from was selling it because she met her Prince Charming when she was 65 and they were downsizing so they could travel the world.”

And even Dr Carroll himself had to strike out a few times before finding ‘The One’.

“It took me three tries to get it right despite being a psychiatrist, so I know how hard it is.”

If you’re considering settling for less than you deserve, or resigning yourself to a lifetime alone, I recommend taking Dr Carroll’s words to heart…

“In some ways, it’s harder when you’re younger, because there are more inappropriate guys to say no to. There hasn’t been enough time for the good ones to clearly separate from the bad ones in terms of career, education, health and so forth. You have to have faith that you will be led to the one you are meant for.”

Comment: How do you know someone is the right one for you?