6 Things To Do And See In Spain

If you’re ever passing through Europe, one of the main attractions has definitely got to be Spain. Officially known as the Kingdom of Spain, this southwest European country shares borders with France, Portugal, and Gibraltar on the southern end of the peninsula.

But what exactly is there to do and see in Spain if you’re only in town for a limited time? Below are just ten activities you should definitely be a part of before you jet out of this majestic country.

This iconic tourist attraction is often bombarded with swarms of visitors, and rightfully so! It is one of the most beautiful architectural wonders in the entire world, especially if you’re into traditional Moorish architecture.

Take a day trip to Granada and don’t forget to visit the Generalife Gardens, which is also a well-known UNESCO Heritage site. 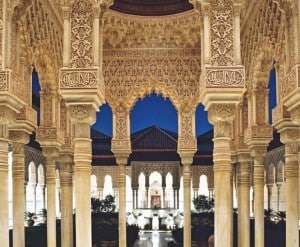 While the sale of street food in Barcelona is strictly prohibited, there are still hundreds of outdoor vendors selling signature Spanish foods for both tourists and locals. If you love something a little sweet, then definitely try a churro – choux pastry that is fried until golden brown, then sprinkled in sugar. Finish off your meal with a refreshing drink called a Horchata which is mad of tigernuts, sugar and water – it has a sweet flavour almost like milk and is served cold. 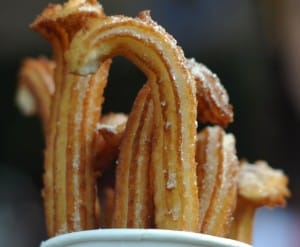 The festival is held annually on the last Wednesday of August, and is basically a large-scale tomato food-fight. However there are a few rules, the tomatoes must be squashed before thrown, and participants must keep their shirts on.

La Tomatina has been an annual festival which was started by a bunch of students in 1945, and has been happening every year since. 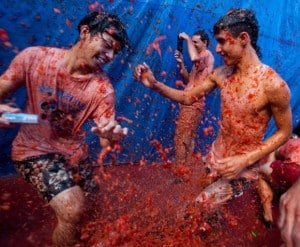 Just a short distance away from mainland Spain is the magical sea-side town of Menorca. Known for it’s traditional summer fiestas, sports and crystal-clear beaches which are much-loved by tourists from all around the world.

Be sure to taste some of the local gin which is made in honour of the patron saints of the island. 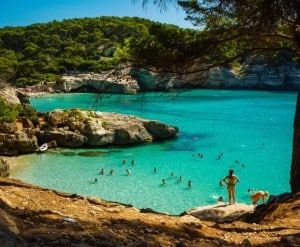 You’ve probably seen dozens of pictures of the fresh fruit and vegetable produce at The Mercat de Sant Josep de la Boqueria, which is a huge public market in Ciutat Vella. Try one of the tasty fruit juices or even the refreshing popsicles to beat the heat. 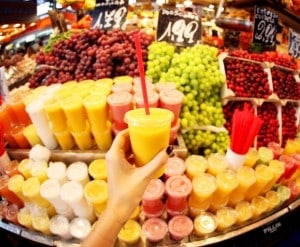 If you want to catch a traditional Spanish bullfight while you’re in the country, then head over to Seville. It’s referred to as one of the main cities of bullfighting and the best season for this is usual between April-October. Stadiums are usually completely packed-out, so make sure to book your tickets well in advance.