7 Heartwarming Ways People Have Come Out As Gay

Although the 21st century has seen a definite increase in the level of acceptance of the LGBT community, the stigma still remains, with gay marriage still one of the most hotly debated topics of the past few years.

In my late teens and early 20s, I bore witness to scores of friends going through the coming out process. Regardless of whether their families and friends were entirely accepting, or whether they were completely ostracised (I saw the full scope), the nerves, anxiety, and often depression that came with even the thought of coming out seemed so…unnecessary. Why should someone ever have to worry about being accepted for who they are?

Considering how deeply rooted homophobia remains in many parts of the world, it’s particularly heartening to witness the courageous and sometimes comical ways people have chosen to come out, and the thorough acceptance of the people who received them. Because really, when somebody is finally revealing all of themselves, acceptance, not sexuality, should be the focus… 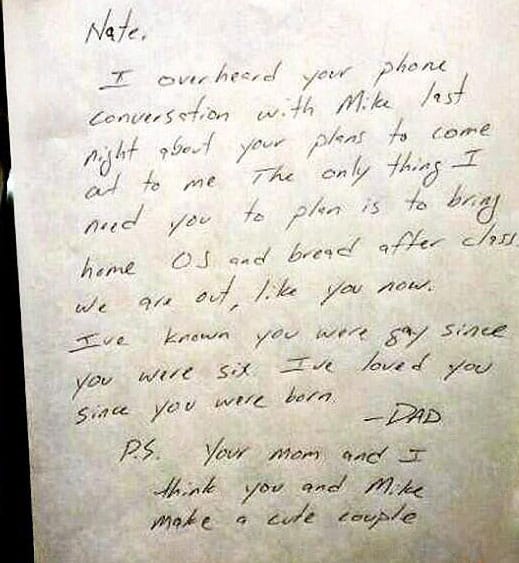 This story when viral in 2013. A man overheard a conversation his them-closeted son had with a friend over the phone. He was talking to his friend Mike about how he was gay, and finding the right time to tell his parents. The father did not interrupt his son, and instead wrote this beautiful note to tell his son it was all okay, and not to forget to pick up the OJ and bread after school. A perfect example of a parent’s love and acceptance.

Highschool student Jacob told over 300 of his peers that he was a gay teen in his acceptance speech for class actor. The  extraordinary reaction of the students is testament to how far we have come in terms of acceptance, and how incredibly willing people are to help stop the hate. Warning: this one’s a tear-jerker! 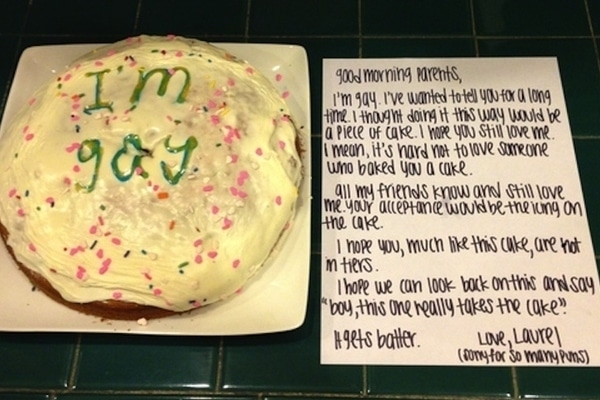 When in doubt, bake a cake. Not only has Laurel used puns like an absolute boss, she has also sweetened the deal (pardon that pun) by including some seriously yummy baked goods. As Laurel says, it’s hard not to love someone who baked you a cake!

Seeing the effort this mother makes to assure her son that she’s perfectly accepting of him being gay is glorious. The encouragement, rationality, and love she shows him just hits me right in the feels. Funny, charming, and moving in equal parts.

This amazing Mormon YouTube star tackles his fears and the entrenched values of his community head on, and the reactions are priceless. Seeing his friends and family get their heads around his sexuality, and their eventual acceptance is as hilarious as it is heartwarming.

This series of gifs has no doubt helped a few people tell their loved ones they’re gay in a very tongue in cheek way. Kudos to the creators.

Ellen has long been a pioneer for the LGBT community and is one of its most extraordinary ambassadors. The night she came out on her sitcom, with Oprah Winfrey playing her psychiatrist, was the night history changed for the better. Ellen’s huge profile has encouraged millions of people to accept who they really are, and has taught others to be tolerant and accepting themselves. Bravo, Ms DeGeneres!