“If you really, really use your free time to think about this case, you cannot come to a different conclusion.”

The murder of six year-old pageant queen JonBenét Ramsey on December 26, 1996, remains one of the most infamous unsolved cases in the world, continuing to capture public curiosity 20 years on.

In the two decades since Ramsey’s death, a range of different theories about the case have emerged, with the world desperate to discover exactly what happened in the Ramsey house basement that fateful December morning.

Marking the 20th anniversary of Ramsey’s murder, former FBI profiler Jim Clemente and a team of experts set out to finally bring clarity to the unsolved case, in a two-part CBS doco-series, which aired this week, titled, The Case Of: JonBenét Ramsey. The series saw the team drudge back through all of the evidence using cutting-edge new technology and investigative techniques in order find answers to what happened to JonBenét Ramsey.

As well as examining all of the evidence from the case, the team also built a to-scale replica of the Ramsey home so they could examine the crime scene as if they were doing so back in 1996, when the murder occurred.

At the conclusion of the series, the investigative team unanimously agreed on who murdered Ramsey, after making some startling new discoveries about the case, including…

1. The fact there was a child’s voice in the background of the 911 call

The documentary examined mother, Patsy Ramsey’s frantic call to 911 to report her daughter’s then-thought-to-be kidnapping. The team also interviewed the emergency worker who took the call, who says she had never been asked to tell her side of the story before. The dispatcher, Kim Archuletta, said she had always felt uneasy about the call because she thought it sounded rehearsed.

This wasn’t proven in the documentary, but the investigators did attempt to decipher the background noises at the end of the call when Patsy thought she had hung up, and concluded they heard the father, John Ramsey sternly say “We’re not speaking to you”, Patsy asking “What did you do? Help me, Jesus”, and most shockingly also claim they heard a child’s voice, that of then-nine year-old Burke Ramsey, ask, “What did you find?”, which contradicts the Ramsey’s 1997 statement to police, claiming their son was asleep during the call.

2. The ransom note was a fake

The ransom note has always been considered suspicious, mostly due to its unusual lengthiness (two-and-a-half pages in total) and its uncanny resemblance to mother, Patsy Ramsey’s handwriting. But in the confronting documentary, the investigative team went as far as to deem it as 100 per cent fake. Retired FBI agent and forensic linguistic profiler, James Fitzgerald, explained that the note, which Patsy Ramsey claims to have found on the morning of her daughter’s murder, is unlike any ransom note ever seen before in the history of the FBI, because of its length and linguistic patterns. Many of the lines in the note were also noted as being taken directly from famous movies – like Dirty Harry and Speed – and linguistically, did not make sense. Further, Fitzgerald profiled the note to determine the author, and estimated it was written by a woman.

It was also noted that the letter had been written inside the house, with paper from Patsy’s desk, which was then put back where it was found. Two practise notes were also found in a draw. The team each copied the note exactly while timing how long it took to write, and the result was over 21 minutes. Fitzgerald also highlighted the fact random notes are usually short, because of the time-sensitive nature of kidnappings. All of these elements led the team to deduce the note to be a fake. 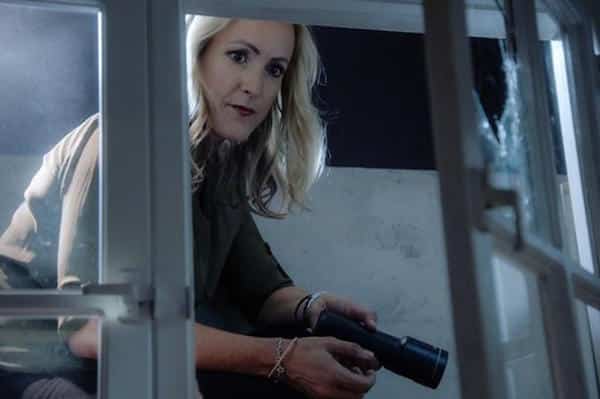 Taking the evidence of a fake ransom note, the investigators tried to prove the validity of the intruder theory. Crime scene photographs of the open window showed undisturbed spider webs, and when a member of the team tried to enter the house through the window carefully recreated in the replica Ramsey house for the investigation, she unavoidably disturbed the webs and left debris and evidence behind.

The team also pointed out the unlikely scenario of entering a home, killing someone, leaving their body in the house, and still leaving a ransom note, concluding it just isn’t something which happens.

4. The Ramseys weren’t interviewed by the police for months

One of the most alarming revelations of the series was the information claiming John and Patsy weren’t even formally interviewed by police until May of 1997 – five whole months after the murder of their daughter.

The documentary’s investigative team interviewed a former member of the Boulder Police Department, Gretchen Smith, who additionally revealed law enforcement were told to treat the Ramseys as victims, not suspects, and should not examine the crime scene without the Ramseys’ express permission.

“The district attorney’s office and some of the administration did not want to hear that an affluent member of the community was guilty of a crime like this,” Smith said.

When they finally were interviewed, Smith divulged the Ramseys were given police documents beforehand, a non-standard practice in crime scene investigations.

Further examination of the television interviews given by the parents in the days and weeks following their daughter, JonBenét Ramsey’s death, were also closely examined by the expert team, who used body language and linguistic cues to determine the authenticity of their statements, going on to determine the Ramsey parents’ claim that they didn’t kill their daughter seemed genuine, while they weren’t nearly as convincing when talking about a murderer being on the loose in the community.

The never-before-seen recorded police interviews with the Ramseys’ son, Burke Ramsey, from January of 1997, were also shown for the first time in the documentary, highlighting some unusual responses from the nine year-old, including an apparent lack of emotion when answering questions about his sister.

5. The DNA evidence was not enough to exonerate the Ramseys 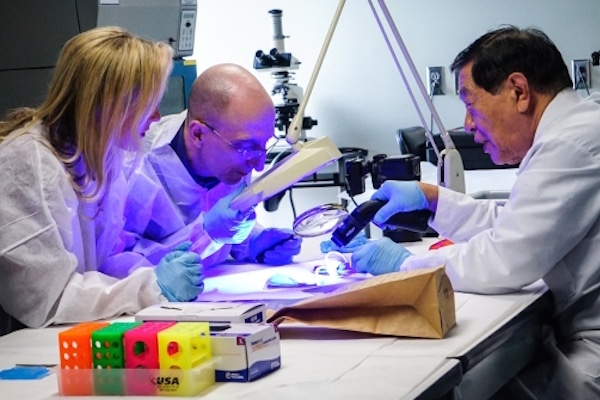 In 2008, unknown DNA found on JonBenét Ramsey’s underwear and leggings was used to exonerate the Ramseys of any involvement in their daughter’s death. But during the documentary, forensic scientist and DNA expert, Dr Henry Lee, proved the DNA evidence was not enough to exonerate – or charge – anyone with the murder.

He explained the six year-old’s underwear items might have still had transfer DNA from the manufacturing process on them, which he proved on the show by testing untouched underwear straight from a package. The untouched underwear had traces of foreign DNA on them, in a similar microscopic amount to those belonging to Ramsey.

6. The murder weapon was a flashlight 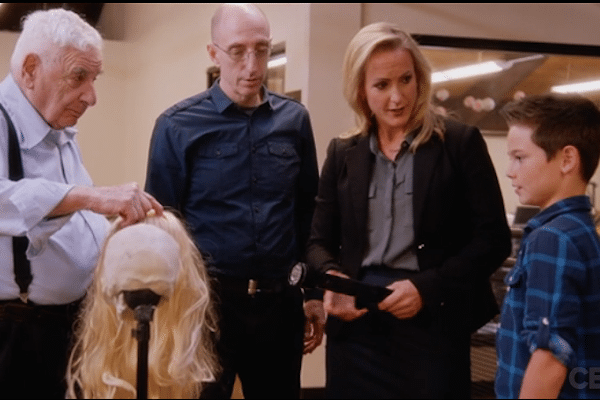 For years, it was believed Ramsey was strangled to death because she was found tied up with a garrote around her throat. The investigative team in the documentary however, refuted this claim, suggesting the tying up and strangulation was staged and done after she had already died.

Instead, the expert panel claimed the cause of death was blunt force trauma to the head, specifically from a flashlight which was found on the kitchen counter of the house. Forensic pathologist, Werner Spitz did a number of tests on screen to demonstrate that the damage done to a skull after being hit with a flashlight was in fact exactly the same as the marks inflicted on Ramsey’s skull.

The panel had a 10 year-old boy hit the model skull – concluding a young person could have inflicted injuries matching those on Ramsey and destroying the original theory that it would have taken the brute strength of an adult to achieve that amount of trauma to a head. The team couldn’t match the marks on her back to a stun gun either, which the case’s original investigators said likely was used to sedate Ramsey; but they did find they matched up perfectly to those on a train set found in Burke’s bedroom and the basement where his sister was found dead.

7. A jury wanted to indict the Ramseys for the murder

Another *gasp* moment; the documentary’s expert team confirmed the original grand jury had actually wanted to charge the Ramseys with the murder of their daughter, but the district attorney at the time, Alex Hunter, said there was not enough evidence and never prosecuted them, instead burying the original court documents.

8. And the biggest revelation: Burke Ramsey committed the murder..?

At the end of the show, investigators concluded the murder was committed by JonBenét’s older brother, Burke Ramsey. They came to this conclusion – which has always been a popular theory – by examining interview tapes with Burke, the contents of JonBenét’s stomach (which had undigested pineapple in it that appeared to be stolen from a bowl of dessert her brother had been eating), and looking at all of the evidence pointing to someone in the house committing the murder.

“If you really, really use your free time to think about this case, you cannot come to a different conclusion,” concluded the panel’s forensic pathologist, Dr Werner Spitz.

The team postulated that Burke was enjoying his late night dessert when his sister got out of bed and snatched a piece, provoking him to fly into a rage and hit her over the head with the flashlight, accidentally killing her before trying to get a response out of her by poking her with the toy train set. The panel went on to claim that it’s likely the Ramsey parents then staged an elaborate kidnapping to cover up the murder and protect their one remaining child.

“Patsy said that they loved their children. They would do anything for their children. She said she would have nothing else to live for if she lost Burke,” investigator James Kolar said.

“That seemed to me motive to cover up for Burke.”

For years, Burke was the only person to not speak out about his sister’s death. But in his first ever media interview with talk show host, Dr Phil, earlier this month, the now 29 year-old’s odd reactions to questions about the murder, during which he repeatedly smiled nervously, had many claiming their theory that he murdered the pageant queen had been proven.

After the CBS docu-series ended, a disclaimer appeared on the screen reminding viewers that JonBenét Ramsey’s murder remains officially unsolved, and as such, the investigators encouraged viewers to use the suggestions put forth in the two-part special to make their own minds up about what really happened on December 26, 1996.

Comment: Did you watch the CBS special? What are your thoughts on the claim Burke Ramsey is the killer?