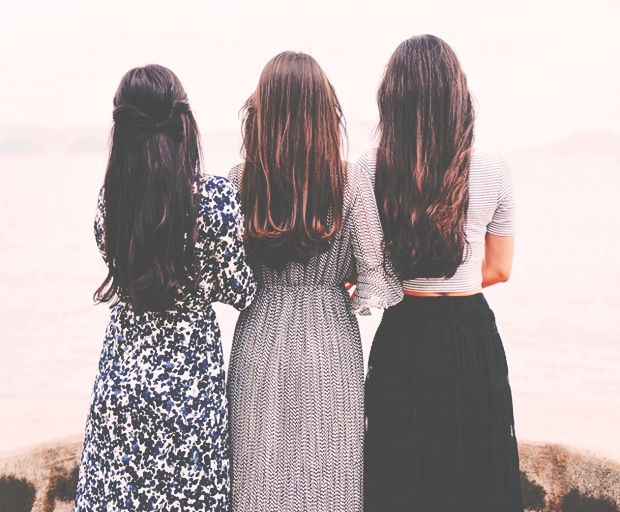 I Tried Meeting Guys The Old-Fashioned Way. Here’s What Happened

Friendships can be just as complicated as relationships…

I remember the first time a friend betrayed me. In first grade, Angie Baker asked me to walk her home, even though she lived a few blocks away from me and I wasn’t entirely sure of the route from her house to mine. I did it anyway, believing her when she said it would be easy and I wouldn’t get in trouble.

When a school crossing guard brought me home a half-hour late, in tears because I’d gotten hopelessly lost after waving goodbye to Angie, my mother told me she’d called Angie’s house and Angie had denied knowing anything about where I was; she said she’d walked home alone. I was in trouble, and my friendship with Angie was never the same.

Sure, that was when I was seven – but thirty-some years later, I’m here to report that mean girl shenanigans never really end. There will always be those people who you think are your friends, right up until something happens to tip you off that they really aren’t. Before you have that sinking feeling, here are a few clues that your friends aren’t really your friends…

1. They’re not happy for you when something good happens

There’s nothing worse than being excited to share good news with a friend, and then having them either shrug it off, ignore it, or make a sarcastic crack that pulls you down to earth. Relationship expert and therapist John Gottman says that how couples respond to each other’s good news is a strong indicator of whether they’ll stay together; being happy for your partner is even more important than supporting them when they’re down. The same goes for friends.

2. They don’t include you in things

Haven’t we all had the experience of scrolling Instagram or Facebook and having your stomach drop when you come across posts from your friends, having a great time together, without you? Sure, friends don’t have to do everything together – but if there’s a housewarming party, a baby shower, or a girls’ night out that your entire friend group was invited to, and you never heard a word about it, it stings. True friends don’t pull that shit.

3.They tell you what to do

A friend likes you for who you are; they don’t try to change you. They also don’t give you advice when you haven’t asked for it. In fact, a really good friend doesn’t give you advice at all. Instead, they act as a sounding board, letting you work things out for yourself and use them as a sympathetic listening ear.

4. They make you feel bad about yourself

If you’ve ever come away from hanging out with a friend and felt terrible, stop and ask yourself why. Friends who aren’t real friends are notorious for subtly picking you apart and bragging about themselves to make themselves feel better. Remember, romantic partners aren’t the only people who can gaslight you – friends can do it, too.

5. They seem to like you better when you’re down

There are fair-weather friends, who only want to hang with you when things are good and you’re sunny and happy, and then there are the ones who are only interested in you when you’re a hot mess. These are usually the same ‘friends’ who aren’t happy for you when you have good news, and who love to give you advice. The weird thing about them is that you think they’re making you feel better, but somehow, it makes you feel worse later. Misery loves company, it’s true – but if that company disappears when the misery lifts, who needs it?

6. They let jealousy come between you

All of us get jealous of our friends now and then; it’s totally normal. Jealousy alone does not a bad friend make. But letting that jealousy come between you and your friend does. You can be happy for someone when they get a book deal, get engaged, or buy a house (just for example), and still feel jealous. The healthy thing to do is talk these feelings out – preferably with a therapist, or your mother, or another friend, and not with your glowing, elated friend – so there aren’t any bad feelings between you.

7. They talk about you behind your back

If you’ve ever found out that a friend said something shitty about you behind your back, you know exactly how awful it feels. There’s a difference between talking out jealous feelings, or talking about genuine concerns you might have about a mutual friend, and talking smack about them. If we’re honest, we all know when our caring discussion turns the corner into toxic gossip. If someone does it to you, you don’t need them in your life.

Just like relationships, friendships goes through their rough patches. But a true friend will talk to you about what’s going on, instead of just disappearing from your life. You can often see this coming, because they’ll do it to someone else before they do it to you. If you have a friend who has a history of dropping people and freezing them out, beware: your turn will come. When it does, keep in mind: you don’t want someone like that to be your friend, anyway. You deserve so much better.

Comment: Have you ever gone through a friend breakup?

I’m Not Just ‘Having A Bad Day’. I Have Depression.

7 Ways You’re *Unintentionally* Being An Asshole