Amal Clooney: In The Spotlight For All The Right Reasons

A little over a year ago if someone had mentioned the name Amal Alamuddin to you, we doubt you would have noticed. Fast-forward to the present day and who would have thought that she is now one of the most talked about women in the world?

Since being linked with the world’s most desirable bachelor, 53 year-old George Clooney, Amal has been thrust into the spotlight. Realising her stunning sense of style was as impressive as her husband’s, the couple made international headlines during their Venice nuptials. Ever since, Amal’s following has grown exponentially – but not just because she is the woman who tamed Hollywood’s most eligible playboy.

Fortunate to be born with both brains and beauty, George has definitely met his match. A published author, international lawyer and activist, Amal specialises in human rights, criminal law and extradition having worked on countless cases including with the infamous founder of WikiLeaks, Julian Assange. And if that wasn’t good enough she is also fluent in three languages Arabic, English and French.

Making her first public appearance as Mrs Clooney at this year’s Golden Globes, the lawyer used her public status as the perfect platform to raise awareness about the recent Charlie Hebdo killings and highlight the injustice via wearing a Je Suis Charlie pin. It was a big night for the newlyweds, with George receiving a Lifetime Achievement award. Hosts for the event, Amy Poehler and Tina Fey, hit the nail on the head when introducing the honourable award; “Amal is a human rights lawyer who worked on the Enron case, was an advisor to Kofi Annan regarding Syria and was selected for a three-person U.N. commission investigating rules of war violations in the Gaza Strip. So tonight her husband is getting a Lifetime Achievement award.” 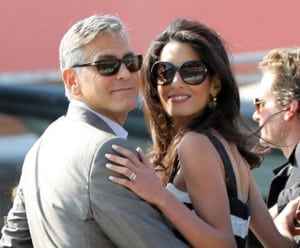 Recently, The Guardian announced the couple’s entrance at an award show saying: “Human rights lawyer Amal Clooney and her husband have arrived.” So is the shoe finally on the other foot, with more buzz surrounding Amal than her renowned husband? No longer are the cameras in the courtroom focused on the victims or perpetrators but instead on the face of the lawyer.

For years the red carpet has been a place for designers to showcase their work, not celebrities to raise social injustices. Yet celebrities exploiting the cameras and media attention they receive accomplish more than any amount of money thrown at the problem could. Notable women include Patricia Arquette at this year’s Oscars on wage equality, Emma Watson launching the UN HeForShe Campaign and Angelina Jolie’s work for UN Refugee Agency whose public position allows greater exposure and endless publicity. It is refreshing to see these people who, like Amal, are both willing and proud to showcase these matters.

So there is no doubt that Amal is intelligent, powerful and an absolute beauty. She has not abandoned her career to become her husband’s red carpet handbag and trophy wife. Instead, she is working harder than ever. That fact that she is married to one of the most prominent, iconic (and dare we say it) wealthiest people in the entertainment industry is just another impressive feature that keeps us in awe.
And that, Mrs Clooney, is why we love you.