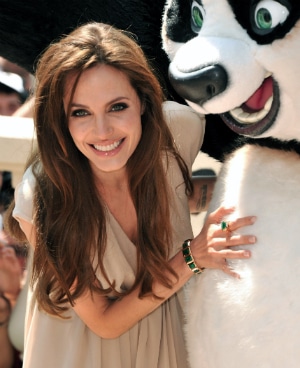 Joh Bailey’s Tips To Rock Your Specs With Fabulous Hair

Speaking at the press conference, Jolie opened up about her kids and how the movie dealt with the issue of adoption.

“I brought my kids to see the movie and they loved it, they laughed through the whole thing. I wondered whether they would ask me questions about it, but because adoption and birth mothers and orphanage — these are happy words. They’re very used to these discussions and they just felt that much more proud that they’re a little more like Po. So it was lovely.”

The actress was thrilled to have her kids in tow with her at the festival, which can be one of the biggest media juggernauts. “Yes, we’re all in France. Our whole family is in France and we’re very happy. They’re running around the hotel right now, playing games, and making a giant mess, I’m sure. They’re having a great time. They love it here. Cannes can be overwhelming, and it can be that you meet a lot of friendly faces and have a good laugh and you also get a chance to see some great films. It’s very nice.”

Jolie also gushed about being a mother and how her six children have brought her inner peace.


“You wake up and if they’re healthy, you know that that’s the most important thing, so you have first of all that peace. They also come with a lot of chaos, but we’re all searching for it. It’s part of the human journey. We all have moments of inner peace and we lose it and we look for it again. But really it’s in knowing the people you love are safe and healthy. That’s the best.”

And finally, ending weeks of speculation, Jolie confirmed what her latest tattoo means – and it’s all about partner Brad Pitt. The tattoo, a series of numbers on her upper arm, are in fact the co-ordinates of Pitt’s birthplace of Shawnee, Oklahoma.

Are you a fan of Angelina Jolie’s?