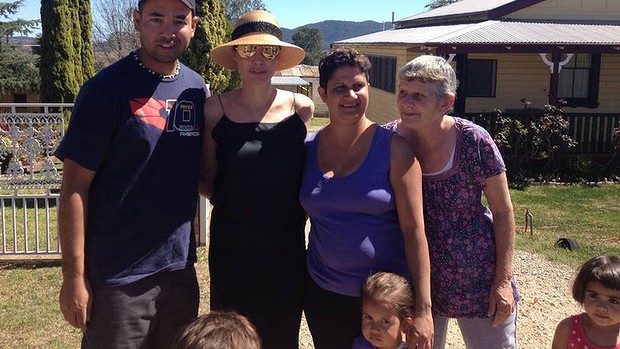 Angelina Jolie is making Sydney her home for the next three months to direct her next film, and on Wednesday she made a surprise visit to Tamworth.

After arriving on a small Qantas Dash 8, the actress and her entourage drove to the small town of Werris Creek, 30 minutes away, to scope out locations for the World War II drama, Unbroken.

Local paper The Northern Daily Leader reports that Jolie “stopped in on Mark Woolfe and the crew at Creek Meats and spent time checking out an alley nearby which is believed to be of major interest to the filmmaker”.

Later, she visited a home in Punyarra Street, “charming all and sundry when she stopped to hug the kids and pose for photos.”

Jolie’s six children stayed in Sydney with minders, with Brad Pitt due to join the family in a few days after filming a movie in the U.K.