Out with the old in with the new – finally, Nutrition Australia have released a new food pyramid!

RELATED: Get Rid Of Stubborn Fat With These 5 Simple Tips

First introduced 35 years ago, the food pyramid has been used as an educational tool to teach people how to have a balanced diet. The thing is, however, it’s been a misleading source of information, says experts, with bread and cereal previously grouped with vegetables and legumes as the primary source of energy.

Using a more realistic and time appropriate approach to nutrition, the new diagram breaks the pyramid up into 4 sections, with vegetables and fruit taking their rightful place at the bottom. Carbohydrate rich foods have been replaced with wholegrains such as quinoa, brown rice and oats, and have moved up on the pyramid because apparently we’re consuming too much in our daily diets. What’s more, junk food has been eliminated altogether! 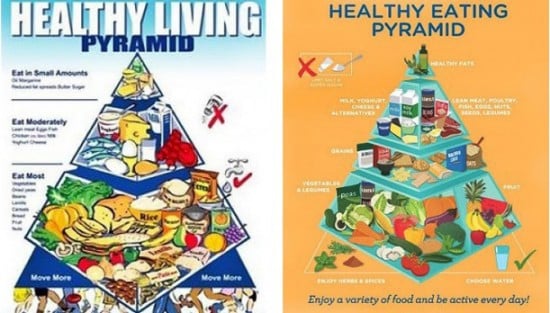 “The new pyramid cuts through the misleading information and fad diets that are getting so much attention, and provides Australians with a credible, flexible and realistic guide to eating well,” Nutrition Australia executive officer Lucinda Hancock told Yahoo! 7.

“We want to get the message across that for most people the simplest way to eat healthier is to cut down on junk food and sugary drinks and to eat mostly from the core food groups – especially to eat more fruit and vegetables,” she continued.

Dairy – with soy alternatives – and protein foods such as lean meat, poultry, fish, eggs, nuts, seeds and legumes (for vegetarians) have been included as foods to eat in moderation, with healthy fats topping the food pyramid in small doses. Interestingly, herbs and spices are recommended for seasoning food instead of salt. Drinking more water and exercising regularly is also encouraged.

What do you think of the changes?