When will you quit insulting the world?

There’s something you need to know. Being a public figure doesn’t give you the right to spread hatred. Your actions have consequences that go deeper than you could ever know.

Last week you allegedly spat in someone’s face during an aeroplane scuffle, before proceeding to call the flight attendant a “f*cking faggot” upon exit. Not even a week later you’ve entered into an Instagram feud with a fan because they criticised you for your colourful choice of insults.

RELATED: Why I Don’t Agree With Banning Chris Brown From Australia

“Oh well imagine how I wanna spray a gay man in the face with pepper spray everytime he calls me a b*tch a slut or a hoe. Kiss my ass. Goodnight,” was your response. You then proceeded to tell the follower they’re likely to die from haemorrhoids or be murdered for using a same-sex dating app. 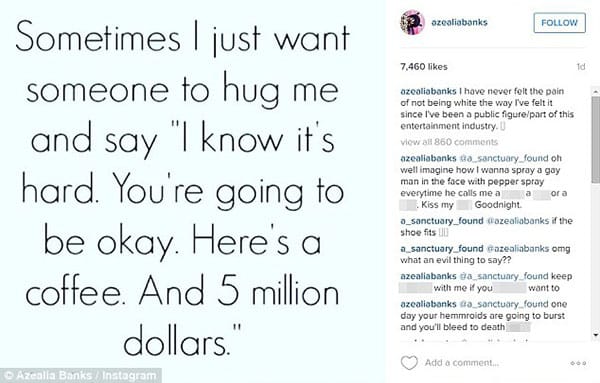 In a bid to defend yourself from the flack I can only assume you copped over said comments, you took to Twitter to liken the LGBT community to the KKK. 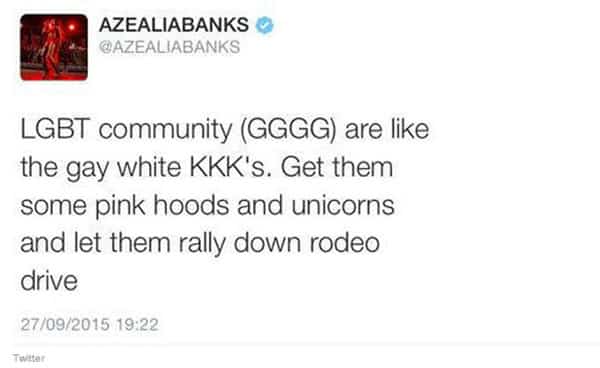 But because that wasn’t beef enough, you then insisted your offended gay followers “toughen up” because they gave you “so much power” over the weekend. “All I had to do was say one word and I moved a whole community. What weaklings!!!” 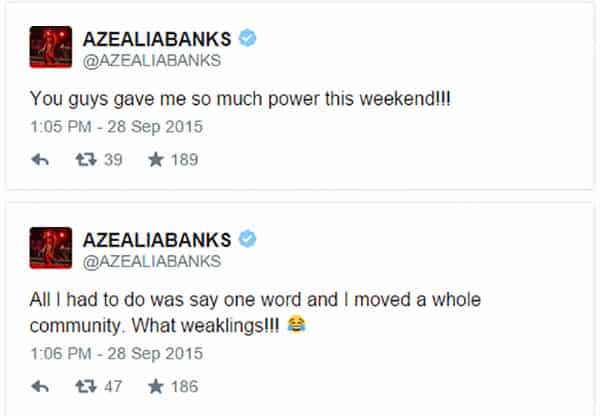 While I’d like to say I get it – you’ve obviously had a hard life and this is your way of expressing your frustrations – I don’t. Of course, I can never fully understand the extent to which you were bullied as a child for the issues you’ve spoken out about, but I can relate to being isolated and treated unfairly because you don’t fit in.

I was harassed and belittled throughout my school years for being different too, and always felt I had to justify my right to exist. But I don’t let that define me, Azealia, nor do I harbour hate towards everyone who ever wronged me, because life is too short to live with a heart full of hate. Aren’t you tired of letting your anger control you, Azealia?

Nothing warrants perpetuating violence, and power is not gained through preying on other people’s weaknesses. You might be hurting Azealia, but aggression and retaliation is not going to make your pain go away.

It’s clear you’ve got a chip on your shoulder the size of Everest, but the way you’re going about dealing with it isn’t working. I’m growing tired of hearing about your feuds; they’re beginning to overshadow your talent as an artist.

I like your music. And I think when you’re not wishing death upon people you have some very insightful and intelligent things to say. Maybe you’re misunderstood. And maybe I’m misunderstanding you. But there are better ways to be heard. No one is telling you not to speak, Azealia, just quit insulting the world at every opportunity you get and your message might actually have some breathing space to finally be received.