The Bachelor Ep7 + 8 Recap: Mansion Of Misery Or Death Star?

It’s business time on The Bachelor Australia as the mansion of misery has now been reduced to just seven prisoners, sorry, women. Oh, the drama!

RELATED: The Bachelor Ep5 + 6: The Battle Of The Brunettes Ends In Tears

The remaining ladies will no doubt be in deep mourning following the “shock” departure of Rachel, 28, a somewhat dour blonde lass, who seemingly never had a conversation with our Bachie Sam Wood, aka Woody, let alone an actual single date with the man. Indeed, I noted with much amusement that some on Twitter were referring to her as gorgeous blonde frontrunner Sarah’s “spare”.

So, to recap – Ep8 opens with this overtly morose declaration, from one of the mansion of misery’s more depressive contestants, following Jacinda’s “shock” departure: “We’re always so flat after we lose someone.” Jesus, it’s The Bachelor, not Vietnam!?

The ladies, aside from Ebru and Emily, the latter who already has a rose, then quickly don helmets and racing suits for a group date whereby they get to take out their sexual frustration on each other in the guise of go-carts. It quickly descends into a farcical Nina Vs Emily face-off, which has more to do with two women each trying to beat and humiliate each other and far less about actually winning poor Woody’s heart (and, erm wood). Poor Woody. It’s his turn to feel degraded.

And once again, Woody shows he’s got some brains in that bouffant. And just a quick segue, while we’re on the topic of hair, has anyone else noticed how Osher and his hair helmet are starting to eerily resemble Ray Martin?!

Woody seems none too impressed by Emily’s bitchiness in showing up Nina to emerge victorious in the go-cart challenge. He actually – gasp – seems quite intuitive and cluey.

Snezana, 34, the lovely, luminous European lass, then gets a second one-on-one date with Woody, much to the other women’s consternation (main picture). Woody channels Miami Vice in a beige jacket and tight pants arriving aboard a vintage speedboat, in which he squires Snez away to a super-romantic Little Italy themed picnic spread. Snezana is cute in her naïveté that Woody actually arranged it all. Bless.

Meanwhile, back in the house, Nina (pictured) distinguishes herself by breaking the girl-code to rat out on the lovely Snez, who had grudgingly confided in both her and Beck that she did in fact share a passionate pash with Woody in the previous episode’s group date “hoedown” at the Australiana Pioneer Village (more on that later). The other girls react with mirth and goodwill mostly, aside from Emily who takes this opportunity to trash-talk Nina behind her back, while she tries her best to save face and explain why she threw Snez under the bus. 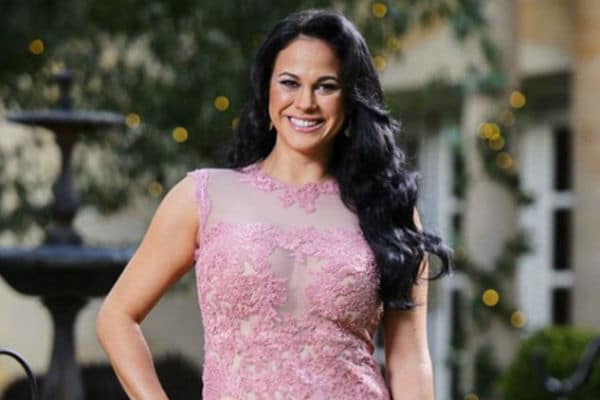 Snez and Woody share some hot chemisty on their date, but is she in his head as well as his, erm, wood ala Heather? I think not. There’s more pashing and a weird pink dessert in the shape of a Star Wars Death Star which Woody has “arranged” to honour his hot date’s love of the science-fiction franchise. Erm, cute – I think. Is Snez Heather’s Death Star undoing? I think not.

Back to the mansion of misery and hormonal hell, where Nina confesses to Snez, to get it off her sizable chest, that she ratted out on her. In addition, Rachel finally gets sent home having not said or done anything of worth the entire series this far. Did the camera crew fall asleep every time she spoke?

Ep7’s aforementioned group date “hoedown” – that word has never carried so much poignancy and weight – saw young Jasmin evicted after she refused to pretend to get maternal about sheep. Woody wants to breed soon, y’all!

Also, Emily and Woody went on a hot beach date whereby she showed off her perfect bikini body and he showed off his perfect, giant torso and they both woodenly and robotically discussed their respective angst at not being married with kids, yawn. He then presented her with precious gems in the form of a treasure hunt bracelet to buy her favours. Cue to Emily’s happiest moment in the house thus far (pictured) – receiving jewellery – which says it all about her, really. She sure as hell ain’t there for our Woody, I’d wager. Oh and did I mention the other poor contestants had to endure huniliation galore in the form of apple bobbing and sheep herding at the hoedown?! The things you do for love (or 15 minutes of fame). 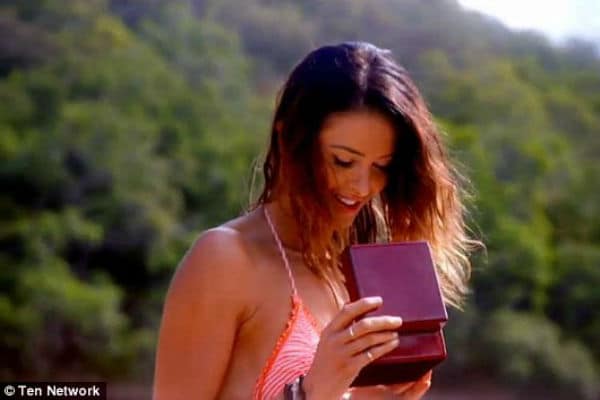 I remain, as ever, #teamheather as it seems to me no one else stands a chance. Woody is smitten with our hipster chick Heather to the point their “relationship” seems strong, despite his ongoing, strong sexual attractions and make-out sessions with a harem of other women in the house. OK, six others now. Heather, FTW!