The Bachelor’s ‘Women Tell All’ Ep Was Next-Level Awkward

The Bachelor never fails to appall and enthral millions of diehard romantics (or schadenfreude enthusiasts) around the world. With the epic finale brewing next week (go #teamJoJo), the only thing close to our excitement levels for that was last night’s ‘The Women Tell All’ episode. And boy, were there ever some dramas.

Everyone seems to be talking about Olivia Caridi, the show’s resident villain. Although in the house she was portrayed as the Queen of Mean (she once compared single mother Amanda Stanton’s life to an episode of Teen Mom), it turns out she actually has a sensitive side.  The news anchor, who went home during a two-on-one date during the episode on February 9, admitted to host Chris Harrison there were times this season when she “hated watching” herself.

Caridi went on to admit she was “severely bullied as a child”, and that being in the house reminded her of elementary school, when she walked into a room and students would stop talking, throwing her filthy looks.

“I knew things weren’t going well, and I knew that people were talking about me, but to pick on my body, to make fun of my breath and my toes and my breasts, this hurts, you know? It sucks,” the Bachelor contestant revealed, holding back tears.

Apparently, the last few months have been so rough, she’s handed over her social media accounts to her sister because she couldn’t handle the cyber bullies. However, even though Olivia tried to redeem herself, the Twittersphere wasn’t buying it. 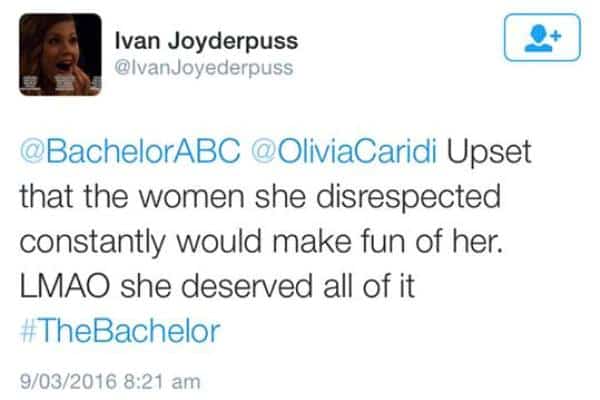 And who could forget the notorious “real Black girl” comments from Jubilee? Seeing Jubilee Sharpe, Jami Letain, and Amber James at each other’s throats about who was ‘the Blackest’ (I feel dirty even typing that) was beyond awkward, am I right? Basically, the girls claimed Sharpe told them during filming that she was the “real black girl” on the show.

“I feel like for a few of us that’s not where it started,” Letain told Sharpe.

“I can speak for me and some other people that are biracial, you have on numerous occasions said, ‘I’m here. I’m the real black girl. I’m gonna make it the farthest for a full black woman.'”

“You’d say these little comments to us, and I would take offence to it,” James weighed in.

“Hearing the ‘N-word’ or hearing things like, ‘You’re not black enough,’ that hurt, and that’s why I was standoffish to you a little bit.”

And as for Twitter; well, you can imagine what happened there. 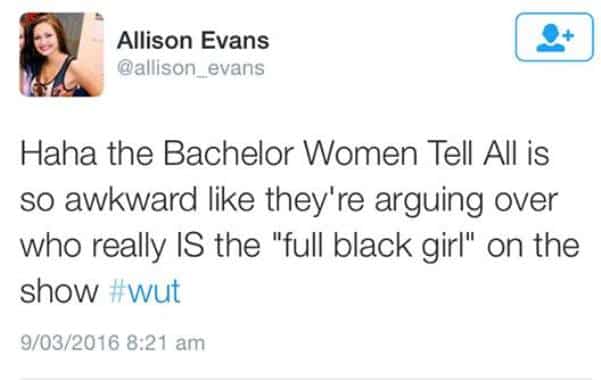 But I guess the real drama of the evening was speculation about why Bachelor Ben Higgins told not one, but two women he was in love with them. More to the point, was he telling the truth? Did he think about what he said? And how on God’s green earth could he make that big of a slip up?! I guess we’ll have to wait until the much anticipated Bachelor 2016 season finale, which drops on March 14. It’ll be saucy, sizzling, salacious, and above all, deeply satisfying.

Either way, this entire episode can be summed up in one Tweet. 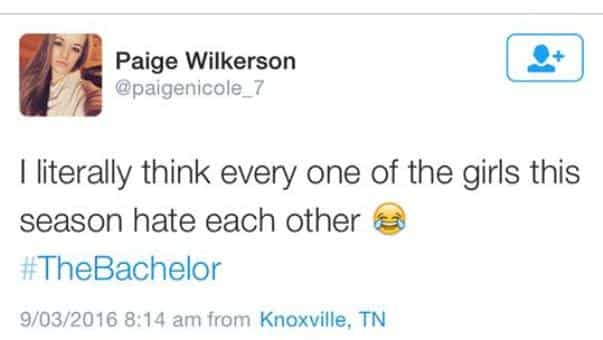 We can’t wait until next week! In the meantime, to prep ourselves for all the drama, let’s reflect back on some of the moments that arguably made this season the best Bachelor ever…

Images via youtube.com and twitter.com. Video via whipclip and youtube.

Comment: What’s your fave Bachelor 2016 moment from this season and who are you rooting for to win?