Ben & Jerry’s Vegan Ice-Cream Is No Longer A Dream

THIS IS NOT A DRILL.

When a few fellow vegan friends nudged a petition my way to compel cult ice-cream brand, Ben & Jerry’s to make dairy-free ice-cream, I begrudgingly signed with an eye roll. Not because I don’t love ice-cream – oh, how I do – and certainly not because I’m a fan of dairy – I’ve been vegan for five years now – but because I’ve been part of so many unsuccessful online petitions to get food giants to make more ethical products that I’ve become somewhat jaded.

So when it was announced last night that Ben & Jerry’s not only heard what we had to say, but have just released four new vegan flavors, it’s fair to say I lost my shit.

Forget the yawn-inspiring ‘token vegan flavor’, which is inevitably the most boring of all, that we vegans have become so used to accepting as our only uninspiring option, the ice-cream giants have just announced they’ll be releasing two permanent and two limited-edition almond milk based additions to their line and oh, how right they were in their flavor choices.

The two new staple Ben & Jerry’s vegan ice-cream flavors will include the popular Chocolate Fudge Brownie and Chunky Monkey, while the limited-edition flavors include a Coffee Caramel Fudge, and P.B. & Cookies (with vanilla and chocolate sandwich cookies), which will also be available in the brand’s scoop shops. Hurrah! 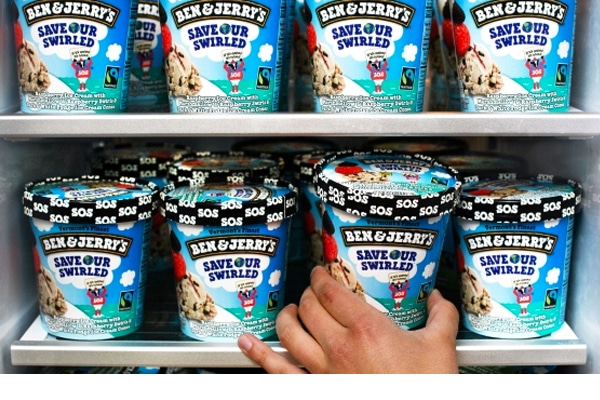 And in case you’ve been trying to convince your friends to make the switch to a cruelty-free diet, it’s worth noting that the two new permanent additions are significantly healthier than their dairy counterparts. Traditional Chocolate Fudge Brownie has 260 calories and 13 grams of fat per serving, while the new vegan version has just 210 calories and 11 grams of fat.

Ben & Jerry’s have pledged all of the new vegan ice-cream flavors will be on shelves from mid Feb this year, so start making room in your freezer.

But there are far more pertinent reasons to ditch the dairy from your diet this year than just enjoying the sweet goodness that is B&J’s ice-cream, like taking a stand against the cruel practices of the dairy industry, which involves the repeated forcible impregnation of female cows using devices deemed ‘rape racks’ to inseminate cows, instigating a pregnancy in order to force milk production.

Sadly, the milk, which is produced to feed baby calves, never makes its way to their babies, who are instead taken from their mothers after just a few weeks (an extremely traumatic process for any mother, and one a female cow will go through multiple times in her life as she’s forced to become a milk-making factory). As it’s natural instinct for babies to want to be with their mothers, separating the two is a difficult process which routinely includes repeated shoving with an electrified prod. If the calves are still too weak to stand, they’re thrown into the slaughter chute.

It’s all well and good to picture rolling green hills when we think of dairy farms, but the reality is, in countries including Australia and America, it’s legal to crush the skull of an unviable calf with a hammer the day it is born; a sad and horrifically cruel part of the cycle that facilitates stealing the baby’s milk to churn out more dairy products, and readying up the mother cow to have the trauma repeated all over again.

In order to simply produce the sheer quantity of milk required for dairy companies to stay in business, female cows are hooked up to milking machines so often they typically develop mastitis – an udder infection that occurs as a result of over-milking, which, apart from causing incredible pain and discomfort for the cow, also causes its milk to be tainted with puss.

Because this is so common, its part of much of the dairy we consume every year. The USDA’s current allowable standard is 750 million pus cells per liter of milk. (Yeah, ew.)

But for the hundreds of thousands of people that make the choice to go dairy-free every year, the more compelling reason, besides allergies and intolerances, is choosing not to participate in the cruel process of taking baby calves away from their maternal mothers, who often exhibit stress behaviors indicative of undergoing trauma after their calves are forcibly removed and brutally murdered.

But what about the idea that we need dairy to stock up on calcium?

While the debate on this issue is still heated, the link between dairy and bone health has never been more shaky.

“Why are the highest rates of osteoporosis seen in the countries with the highest intakes of dairy products?” says Professor of Nutrition at New York University, Marion Nestle.

High intakes of dairy products do not guarantee good bones, largely due to the often ignored fact that milk isn’t just calcium, it’s calcium packaged with proteins, and those proteins can limit its effectiveness, which is the reason many milk companies are now eliminating them with products like A2 protein-free milk. But here’s an idea – rather than manipulating a product to force our bodies to assimilate it, why not simply ditch it altogether?

As someone who’s been vegan for five years now, my calcium, iron and cholesterol levels have never been better. My doctor regularly asks me what my secret is.

While I understand a vegan lifestyle isn’t for everyone (self included, I’m the first to admit my wardrobe is not a shining example of cruelty-free living), ditching dairy from your diet in favor of healthy alternatives like almond milk, coconut and soy products even just a few times a week will not only drastically lower your cholesterol and saturated fat intake, it’ll contribute to saving thousands of female cows from the torture of having their babies killed.

And yes, a few scoops of Ben & Jerry’s vegan ice-cream may just help you get there a little faster.