Canadian photographer Benjamin Von Wong has defied nature and shot a collection of artwork consisting of images taken underwater. The photos done in the depths of Balinese water made for the perfect abstract backdrop for a fashion shoot. The surreal images created a challenge between the wreckage and aquatic flora with Wong describing:

“Normal models wouldn’t work unless they had extensive dive training and even then, they wouldn’t have the ability to hold their breaths for very long, especially at depth so free divers were going to be required.

“Normal clothes couldn’t be rented since the sea water would wreck them, so we had to find a designer willing to part with the clothing they’d lend us. Normal assistants wouldn’t work, specially trained safety divers were going to be necessary to ensure a smooth photoshoot”. 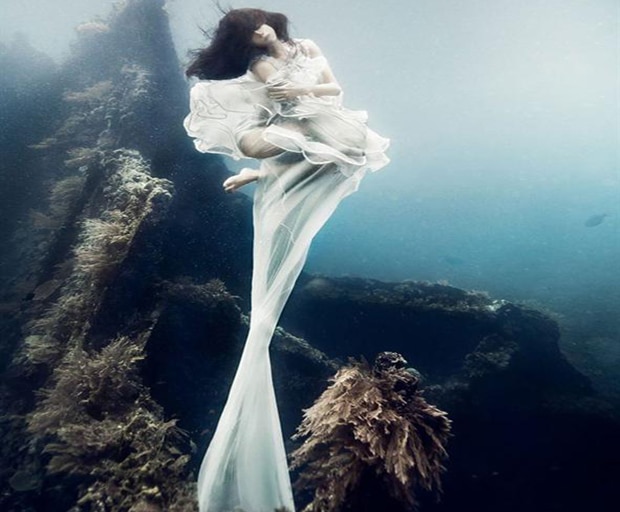 Though, despite these complications the models look at ease, as though they were at home in the ocean, peaceful, even asleep and dreaming. The clothing is much the same, flowing to the current and moving with the models in a manner of serenity.

Models Nora Li and Camilla Argent made the impossible happen, as Wong said, “Lighting and gear would be limited – shooting underwater meant that we had to work with what we had available: on camera strobes or natural light.” Yet their bodies looked as though they were in a studio and these complications were non-existent.

Wong created the highlight of his career with this collection, the unpredictable shoot required hard work and training, but in the end, the effort was more than worth it.