That costs how much?!!

The other month, I was flying within Australia. Those of you who have any knowledge of the laidback country in the Southern Hemisphere would know that one of its biggest drawcards, food-wise, is Tim-Tams.

Never heard of them? Let me explain: about 30 per cent of each chocolate cookie (or biscuit, as they’re locally known) is cream – and the cream has real chocolate in it. They are coated in a mixture of cocoa mass from Fair Trade farms in West Africa, cocoa butter from South East Asia, and milk powder and butter oil from Australia and New Zealand, in a ratio that is simply perfect. And I’m not the only one who thinks so: in 2016 alone, 500 million (read: half a billion) packets of the iconic sweet treat were sold.

Since they were launched in 1964, so many new varieties have been introduced; the latest offerings, made in conjunction with cult dessert chain Gelato Messina, include black forest, coconut and lychee, salted caramel and vanilla, and choc mint. And although these combos are usually To. Die. For, nothing beats the original.

The regular retail price of a pack of original Tim Tams is AU$3.65, but local supermarkets such as Woolworths, Coles and IGA often have them on special at about the AU$2.50 price point. So you could imagine my shock when I saw them “on sale” at four packs for $24 at Sydney’s domestic airport. And people, who were evidently tourists, were stocking up. I’m talking arm-loads of them! 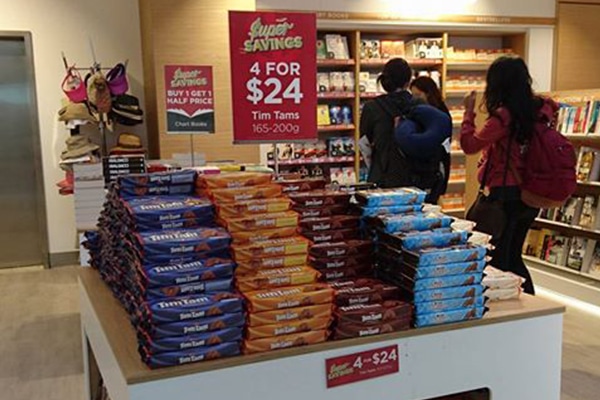 It made me wonder whether there is actually a discount to be had at duty free, or whether it’s all just a rumor made up by marketing departments.

“Although duty-free shopping can be hard to resist, it’s not always worth it,”reveals Bessie Hassan, money expert at finder.com.au.

And the stats prove it, too.

When the researchers at the comparison site cracked down to find the truth, they learnt that we really shouldn’t be wasting our money.

Toblerones are 88 per cent more expensive, honey-roasted macadamia nuts 18 per cent, and, no surprise to any of us now, Tim Tams are 72 per cent dearer. When it comes to wine and champagne, the difference is minimal (a discount of less than 10 per cent), so “if you drink wine on the regular, you can get them even cheaper when you buy six at the same time at retail stores”, says Bessie.

And I hate to break this bad news, but if you’ve ever bought beauty products in duty-free, chances are you’ve been ripped off. Women’s perfume is 59 per cent more expensive and men’s eau de toilette came in at 38 per cent dearer in our fave section of the airport.

Plus you can save money by doing your research. For example, “perfume from French brands are likely to be less expensive if you buy them leaving France”, says Bessie.

And her parting tip?

“Remember, you’ll need to carry what you buy from duty-free for the remainder of your trip. If you’re on a long-haul flight with multiple stopovers, you may want to do your back a solid and rethink your purchase. Plus, depending on liquid restrictions, you run the risk of getting them taken off you.”