Blake Lively Is Offending Women Of Color With Her ‘Booty’ Post

I’m usually a fan of Blake Lively’s, but the actress posted a pic to her Instagram this week that made me question her awareness of the fact that she’s a privileged white woman.

Lively posted two shots of herself spliced together at the 2016 Cannes Film Festival this Tuesday, one taken from the front, the other from behind, along with the caption, ‘L.A. face with an Oakland booty’.

Now while I’m sure Lively’s comment – a throwback to the cheeky lyrics from Sir-Mix-a-Lot’s ’90s hit, Baby Got Back, and essentially a metaphor for having a bangin’ bod – was well-intentioned enough, it also carries some very racially charged connotations. 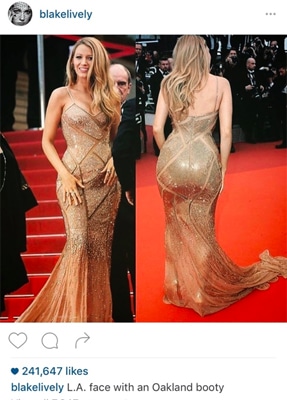 When Sir Mix-A-Lot’s alter ego, Anthony Ray, wrote those song lyrics, he was making a point. Baby Got Back isn’t just a song about big butts, it’s about recognizing and celebrating bodies that are traditionally held back from popular media – the bodies of women of color.

“The black, female body was not accepted as the norm anywhere. For years, all you saw on television was overweight black maids or black women who would assimilate to white culture, as far as the look is concerned,” Ray told HuffPost Entertainment.

“I wanted to do something that was tongue-in-cheek, but, at the same time, making a real point.”

Unsurprisingly, the problematic statement has sparked a backlash on Twitter, with followers calling out Lively for being racially insensitive.

Another day, another rich white woman using WOC’s bodies as a punchline and commodity. As if Blake Lively wasn’t the worst already.

Not sure what’s grosser, the “LA face with an Oakland booty” caption or that someone would write that abt themselveshttps://t.co/7RSuXkwzmS

However, others were quick to make light of the cultural misappropriation, suggesting the reactions were another example of PC gone too far.

If you think Blake Lively is racist for quoting Sir Mix-A-Lot, you shouldn’t ever be in a car with me when I’m listening to N.W.A

Remind me again why Blake Lively is NOT allowed to quote Sir Mix-A-Lot? What other artists should she avoid quoting on her Instagram?

The actress’s attitude is indicative of the way so many other white millennial women – self included – have been conditioned to think. So much so, there’s unlikely to be anyone reading this who isn’t guilty of racism; not because we’re setting out to alienate and discriminate against the less privileged, but because treating women of color as lesser is so ingrained in our culture, we’re often unaware we’re even participating in it.

No doubt Lively will take some more time to consider her privilege before she next broadcasts something with racial connotations, but she’s not the only offender. If we take anything away from this, it’s that we all need to do better, and the only way to do that is to start paying attention to the power our attitudes have on others.

It’s not about whether you’re personally offended by Lively’s post. It’s about whether it reinforces a much wider and more dangerous ideology, one that allows men like serial rapist Daniel Holtzclaw to target Black women because he knows they’re less likely to speak out; or makes it okay for Zara employers to publicly humiliate an African American employee because of her natural hair; and one that ensures an oppressed minority stays oppressed.

If you think that’s making a mountain out of a molehill, you missed the point.