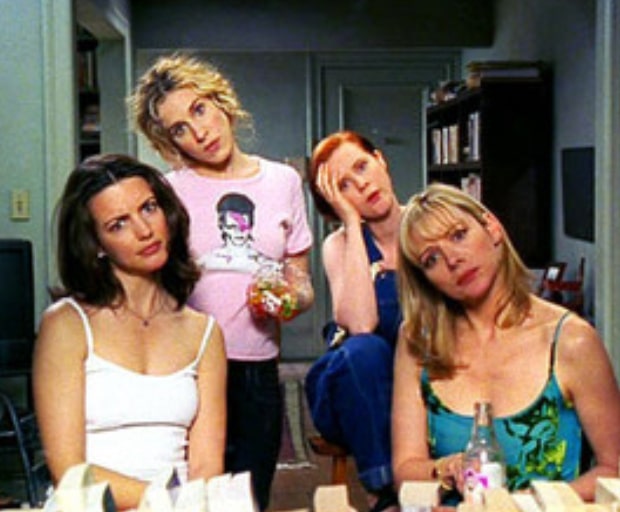 In my opinion, Sex And The City defined a new generation of television, one that jumped far from false imaginations and into a world of unspoken pleasure.

Though it may not have been safe for our young eyes when it first came out, over the years it has safely provided us with the most effective sex education we could ever have received.

You don’t have to do it

We have Ms Charlotte York to thank for this one. Remember when she was dating that guy who was TOTAL marriage material – until that night he kept trying to force Charlotte’s head down on his junk then freaked out when she revealed she didn’t like giving BJs? To paraphrase Meat Loaf: She would do anything for love, but she wouldn’t do that.

If you plan to give the delivery guy one at work, lock your office door

Ah, Samantha Jones. She taught us so many things, including the fact that exhibitionism should be encouraged. Having said that, some people (ahem, Carrie when she was in her prudy phase) might feel uncomfortable walking in on you pleasuring the FedEx guy. And yes, I know that’s her issue and not yours, but most workplaces also frown upon it (read: you could get fired).

No one dick is the same

SATC taught us no two penises are the same. You could get a guy whose cock is the size of the tip of a hotdog sausage, or you could find a guy who has an incredible tool and really knows how to use it – but he uses it all over town, or you could get a guy with “funky tasting spunk”, as Samantha put it. (Thankfully, in this case, it’s possible to make oral sex a tastier affair.)

“They don’t call it a ‘job’ for nothing”

Another golden one-liner from Samantha, and – once again – so on point! When guys say “Come on, just a little BJ – up and down a couple of times, you’re done. It’s easy”, don’t you just want to punch them in the throat? Since violence is never the answer, take a cue from Sam’s book and explain all about teeth placement, jaw stress, suction, the gag reflex and “bobbing up and down, moaning and trying to breathe through our noses”. Tell us what you really think about oral sex, Sam.

Samantha said it best when she exclaimed: “I will wear whatever and blow whomever I want as long as I can breathe and kneel.” And it’s true. If you like doing something and it’s not going to hurt anyone, do it – that’s the key to living a happy life.

Giving them will give you power

Comment: What’s the best thing you learned from SATC?