A viral before and after photo of a mum of three posing nude has prompted a movement that is said to “create global change” by combating body image once and for all. The project, titled Embrace, started to gain momentum after the campaign’s founder Taryn Brumfitt took to social media in 2013 to celebrate her curvier ‘after’ body, following a bikini contest she competed in where she was deemed to have the “perfect” body.

Sitting down with the Today Show, Brumfitt said the reason behind the post was to teach women to love their bodies. “I was talking to some friends… and they were struggling with the concept of loving their body after they’d put on a few kilos. And so I thought I would post this photograph to demonstrate to them that you can love your body when it looks like the before, and you can love it after.” 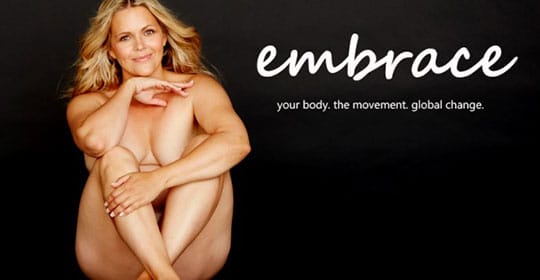 The image coincided with the Embrace documentary she is set to release that aims to encourage women to embrace their bodies by recognising that real beauty is from the inside out. The 5 minute trailer for the video was recently released and opens with Brumfitt sharing some of her negative self-talk as she pokes at her body in front of a mirror.

“You are fat, and you are ugly, and you are disgusting. That’s what I used to say to myself when I looked in the mirror,” she said to the camera.

As the video progresses, the mum then goes on to discover that she’s not alone in her self-defeating ways, after asking 100 women to use one word to describe their bodies. Wobbly, imperfect, stumpy, very average, frumpy and not nice to look at were some of the alarming responses, while one women confessed: “I hate it. I feel disgusting.”

She soon realised that happiness didn’t come from being perfect, it came from accepting who you were, lumps, bumps and all. And in a bid to be a good role-model for her daughter, she started to make some changes. “I wanted to be a positive role model for her, and that’s what started this whole movement,” she said to the Today Show.

In a recent interview with the Sydney Morning Herald, she explained: ”We are constantly told to be something other than what we are. That we are gross or that we need to change … We’re not encouraged to love our bodies unless they conform to one idea of beauty … but beauty is so much more. We need a different currency for beauty. We have to change the currency of health and beauty.”

Brumfitt’s goal is to make a documentary that is “beautiful and life changing for people all around the world,” and after successfully crowd-sourcing over $300 000 to fund the video, and with nearly 6 million views of the trailer since its release, it seems she is well and truly on her way.