Unless you’ve been hiding under a rock for the past week or so, you’ll probably already know that Angelina Jolie and Brad Pitt finally tied the knot. They’re one of Hollywood’s most loved power couples so how on earth did they pull off one of the most secret weddings of all time and what do we know about this private affair so far?

It’s believed that Brad Pitt made arrangements for the wedding in a recent trip to France in July. It was during this trip that he was photographed wearing a t-shirt with a ‘Brangelina’ picture on the front, drawn by his daughter Vivienne. This picture shows Brad and Angelina holding hands and he appears to be wearing a suit while she is wearing a dress. Could this have been the first clue that they were headed down the aisle? 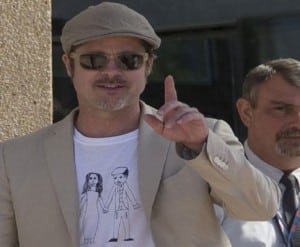 The family then arrived in Nice on Friday August 23 by private jet before they were chauffeured to their private estate.  Then on Saturday the August 24, in an intimate ceremony with just 22 guests in attendance, Brad and Angelina wed in a small 13th century chapel on the grounds of their 1000 acre French estate, Chateau Miraval.  The chateau which the couple bought in 2012 for approximately $60 million is located in Correns, a small French town which is home to approximately 800 people and is surrounded by acres of gardens, olive groves, woodlands and vineyards.

Most of the guests in attendance were from Brad’s side of the family, including his parents and siblings.  Jon Voight, Angelina’s dad, did not attended the wedding.  Angelina was walked down the aisle by her two sons Maddox and Pax, her daughters Zahara and Vivienne were the flower girls while Shiloh and Knox were the ring bearers.

Although no pics have surfaced yet it has been reported that she wore a white floor-length antique lace and silk dress with a veil as well as a locket with a photo of her late mother Marcheline Bertrand inside.

It has also been reported that there were three different types of cakes at the reception, picked by the children.  Strawberry ice cream, chocolate gateau and a third with fresh cream and strawberries

The couple are reportedly combining their honeymoon with an upcoming movie shoot in a small island near Malta in the Mediterranean.  They’ll be spending their time on a 100-foot yacht, kids included, whilst they both shoot a new film By The Sea, their first onscreen reunion since Mr and Mrs Smith.

Their marriage marks 10 years since they fell in love on the set of Mr and Mrs Smith.