Cake Company Abuses TF Out Of Bride After She Declines Quote

The company personally wrote to her to call her ‘a despicable bottom feeding wretched disgrace of a person’.

If you’ve ever attempted to plan a wedding, you know the tedium that is the calling dozens upon dozens of potential service providers for quotes. And you’re probably also familiar with the shock quote: the service provider who gets back to you with a price that’s so laughably out of your budget, you have to do everything in your power to politely conceal your shock as you let them down gently. It’s all part of the wedding industry, and companies that are part of it are extremely well accustomed to it.

Well, except for one horrifyingly abusive business, that is.

When NYC bride-to-be Amanda De Pascale contacted dessert company Sweetery for a quote and was met with a price outside her budget which she decided not to take any further by declining to respond to the business’s follow-up phone calls, things took a surprisingly nasty turn.

The company’s president, Grant Di Mille, decided to teach De Pascale a lesson about not responding to incessant sales calls by serving her an essay-length email diatribe spewing insults at her, including informing the bride-to-be that ‘We have zero idea what type of warped sick games you are playing with us, but now is the time for us to have a say.’

‘You are a despicable bottom feeding wretched disgrace of a person, who is as disgusting as they come. How many times we have called you to follow up…every time you cowardly hang up the phone on us…What an absolute low life twisted miserable individual you have to be.’ 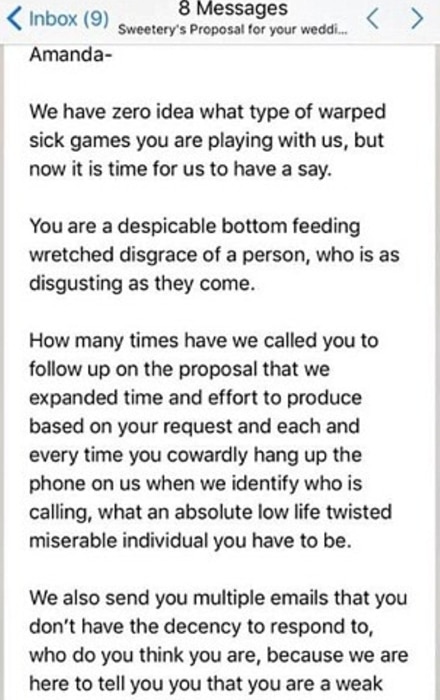 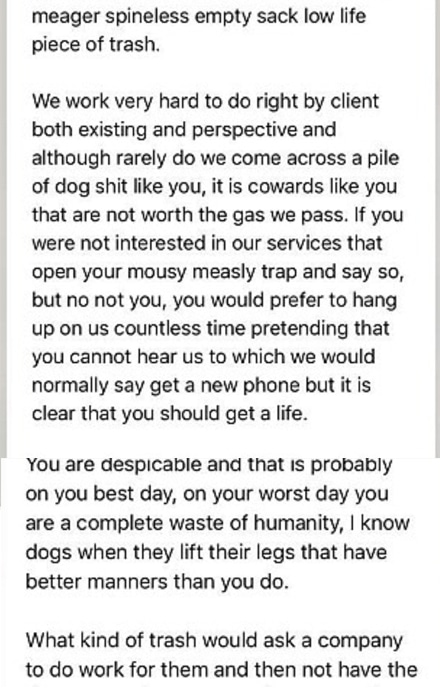 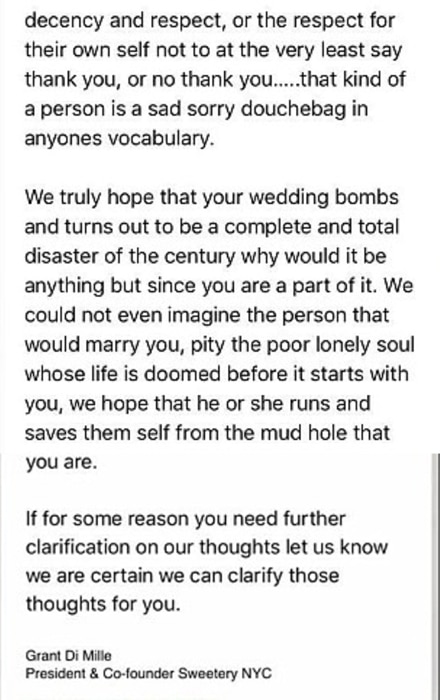 De Pascale says the cruel email came after a stream of near-constant phone calls from the company, following her request for a quote.

“They kept calling me, multiple times an hour, then would stop for a few hours, then call back again…I told them. “I can’t talk right now”, “I’m at work”, and hung up. But he continued to call and call for about two weeks,” the budding bride told the Daily Mail.

After one of her friends posted screenshots of the email on Facebook, DiMille posted an apology, saying the letter had in fact been written by another unnamed staff member, despite coming from his email account.

“Yes, it came from a company computer, but it was not sent by myself or any member of management…I had a conversation with our associate who wrote to the client and told him that we had no choice but to let him go based on the pain that has been caused to Amanda,” the company’s president told Fox News of the incident.

Regardless of where the blame truly lies, it’s fair to say the sweet-based business has left a sour taste in its prospective bridal customers’ mouths.