Why Calling A Woman A ‘Mad Witch’ Isn’t A Compliment

This week Australian Immigration Minister Peter Dutton has been embroiled in a sexism scandal as a result of dubbing political editor, Samantha Maiden, a ‘mad f***ing witch’ in a text message he accidentally sent her about a column she wrote about his colleague Jamie Briggs, who the message was intended for, in an epic case of clumsy fingers.

Dutton’s insult was in response to a cutting (and justified) article Maiden penned about Briggs’ wholly inappropriate behaviour with a 20-something year-old public servant on a trip to Hong Kong. It is alleged he sexually intimidated her, and as such was forced to resign for not meeting the extremely high ministerial standards of conduct.

After the young woman’s confidential complaint that Briggs kissed her on the neck after drinking heavily, and invaded her personal space without her consent, he sent a photo (taken on his phone) of her standing next to his chief of staff, Stuart Eaton, to a number of colleagues. Of course, it ended up on the front page of a newspaper, sparking much public outrage at the breach of privacy.

In response to the furor, Maiden, a respected female journalist, wrote a very sophisticated, non-inflammatory article expressing her considered opinion. However, in some sort of chauvinistic solidarity to Briggs, Dutton decided to describe her as a “mad f***ing witch”.

Regardless of its connotations, Jessica Jones, superhero and feminist character extraordinaire, decided this kind of language was a good thing. 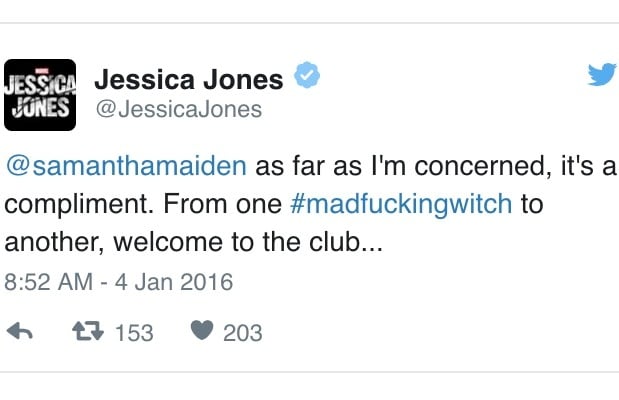 Here’s the thing. Calling a woman a mad f***ing witch, although it may seem like a fairly tame, archaic insult, is the furthest thing from okay, let alone complimentary, for two reasons. Firstly, Jessica Jones is an American franchise. Her Twitter account is controlled by Americans, who are evidently extremely unfamiliar with Australian vernacular. In Aussie-speak, especially among 40-plus men, the phrase Dutton so gratuitously used is culturally about the worst possible thing you can call someone. Especially to a woman coming from a man. It’s the equivalent of calling a woman a “crazy f***ing c*nt”, a “stupid f***inf slag”, or a “wacked-out f***ing bitch”. All gendered insults, all smacking of hyperbole, and all extraordinarily sexist.

Now to reason number two. Jessica Jones can be forgiven for missing the all-Australian connotation of Dutton’s appalling language. After all, not many people globally are familiar with Aussie slang. However, she should have picked up the fact that the most insulting, degrading, misogynistic word of these two adjectives and a vowel is, actually, ‘mad’.

For hundreds, perhaps thousands of years, women who express strong opinions and argue them articulately have been dismissed as mad. Or bitchy. Or ball-busters. It’s a way of policing women in an inherently patriarchal society. Female journalists cop a huge serve of it. They suffer more than three times the amount of online abuse male journalists endure, mostly in the form of gendered insults, derogatory comments about physical appearance, and threats of sexual violence.

Although more women are taking a stand against this, it is still glaringly evident that women with opinions are taken seriously only up to a point. After we hit our perceived intelligence quota, we’re thrown a barrage of disclaimers, and pressured to constantly apologize for saying anything in the first place. The amount of times I have been talked down to by male acquaintances in a heated conversation face-to-face or online in a way they simply would not speak to other men, could, horrifyingly, fill about three books.

Not only does Dutton’s comment to Maiden highlight an attitude still shockingly prevalent, the condoning of it by a character supposed to empower women reveals even women don’t consider it the hideously frustrating, glaringly obvious problem it is. Unless, of course, it’s a man who mans Jessica Jones’ Twitter account. Either way, it’s chauvinistic, destructive, and the furthest thing from a compliment. The sooner we fully acknowledge this, the sooner we’ll reach some semblance of gender parity.

Images via canberratimes.com.au and twitter.com