Cara Delevingne On Modelling: ‘It Just Gets Worse And Worse’

The modelling industry has been getting a bad rep as of late and now superstar Cara Delevingne has added even more fuel to the fire.

RELATED: How Young Is Too Young? 14-Year-Old Models For Dior

Opening up to The Times, the 23-year old confirmed that she won’t be “doing fashion work anymore” after dropping her management company in recent months; however, the seemingly quirky and overly confident fashionista turned actress revealed that the reason behind her decision wasn’t just to focus on her film career, but instead because she was left hating her body.

“Modelling just made me feel a bit hollow after a while. It didn’t make me grow at all as a human being. And I kind of forgot how young I was… I felt so old,” Delevingne told the mag.

Speaking out about the constant demands of the industry, she added: “I was, like, fight and flight for months. Just constantly on edge. It is a mental thing as well because if you hate yourself and your body and the way you look, it just gets worse and worse.”

After being in the industry for nearly a decade and as one of the most influential models in the world, you’d be quick to assume that Delevingne would be well acquainted with, and comfortable in, the business. Even the most awe-like human beings have their limits, though, and the stress of the profession led her to develop anxiety and the skin condition psoriasis, she said.

“People would put on gloves and not want to touch me because they thought I was like, leprosy or something.”

The actress later went on to criticise the industry for sexualising young girls and revealed that as a teen she was made to feel like she couldn’t say no to proactive poses. “I’m a bit of a feminist and it makes me feel sick. It’s horrible and disgusting,” she told The Times. “You start when you are really young and you do, you get subjected to… not great stuff.”

This comes off the back of the recent exploitation of 14-year-old model, Sofia Mechetner. After signing a $200,000 contract with Dior, the young teen was then paraded down the runway wearing a sheer, see through dress. While the brand said that it was “all for art” and not meant to appear sexy, one has to question why a multi-million dollar fashion house is choosing pre-pubescent girls to showcase adult clothing. 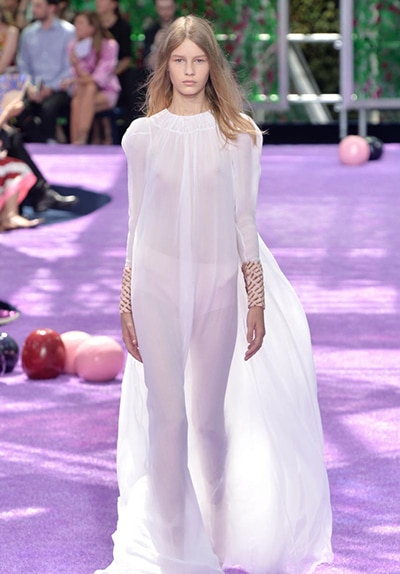 Tell us your thoughts… When is enough, enough?