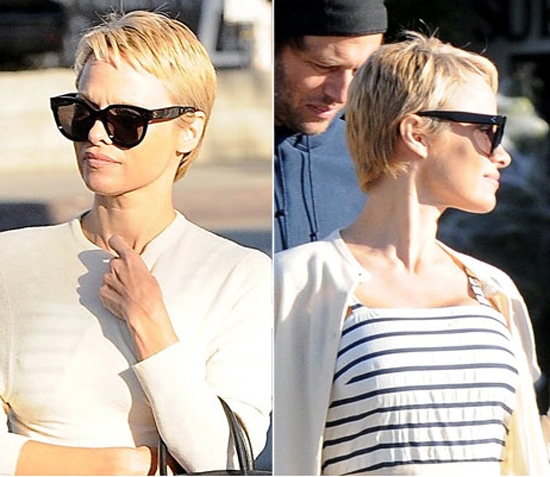 Who’s the latest celebrity to chop off their hair? Pamela Anderson has ditched her signature bombshell blonde locks and opted for an ultra short pixie cut. We actually had to do a double take!

Anderson, 46, showed off her chic new short haircut in L.A. today – and we think she looks amazing!

Seems like the pixie haircut is one of Hollywood’s favourite celebrity hairstyles – with Charlize Theron, Michelle Williams and Anna Hathaway all sporting the feminine ‘do.

The Baywatch babe who now devotes her time to animal rights was accompanied by ex-husband  Rick Salomon. Two weeks ago Anderson admitted to Ellen DeGeneres that the pair have been spending more time together lately, including a holiday to France where they were spotted on a nudist beach.

What do you think of Pamela Anderson’s new pixie haircut?

Most Iconic Hairstyles Of The Past 50 Years

What Your Hairdresser Really Thinks: Salon Dos and Don’ts