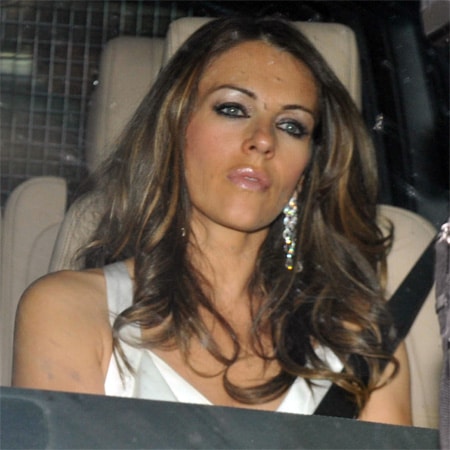 Liz Hurley wowed onlookers at Sir Elton John’s annual White Tie and Tiara Ball on Thursday by wearing a daring white gown, which was slashed to the knee.

Accompanied by her husband Arun Nayar, the 45-year-old star – who was given away by Elton at her 2007 wedding to the Indian textile heir – stood out from the crowd in the figure-hugging Versace number, while sticking to the party’s dress code.

However, one star who strayed away from the White Tie and Tiara theme was David Walliams’ new wife, model Lara Stone, who fashioned a simple, red, floor-length gown and diamond Chopard earrings.

The newlyweds – who tied the knot with the ‘Little Britain’ funnyman in May after a nine-month whirlwind romance – were joined at the lavish bash by a galaxy of other stars.

Peter Andre and British reality TV star Kerry Katona – who arrived together with their manager Claire Powell – also received an invite to the bash, which was held to raise money for the Elton John AIDS Foundation.

‘Alejandro’ singer Lady Gaga provided the evening’s entertainment and went on to thank everyone who attended on her Twitter page.

She tweeted: “What a brilliant evening with wonderful friends. Thank you to everyone who donated to the Elton John AIDS Foundation. What a magical stage.”