Chris Hemsworth Reveals UNRECOGNIZABLE Pic Of Himself In New Role

The star existed on 500 calories a day in prep for his latest flick.

Be prepared for your jaw to hit the floor when you see the how our fave Hollywood hunk, Aussie actor Chris Hemsworth looks for his new role in the upcoming flick, In The Heart Of The Sea.

Hemsworth, who has been existing on a meagre 500 calories a day weight loss (read: starvation) diet in preperation for playing a sailor left stranded at sea for 90 days, recently shared a snap of his lithe new look with his Twitter followers and it’s safe to say the star is absolutely unrecognizable.

Set to be released next year, In The Heart Of The Sea is based on an 1820 incident when a whaling crew were stranded at sea after a sperm whale destroyed their ship; also the inspiration for Herman Melville’s novel, Moby-Dick.

“When you’re already starting off lean, its brutal to chew through that kind of weight,” he said. 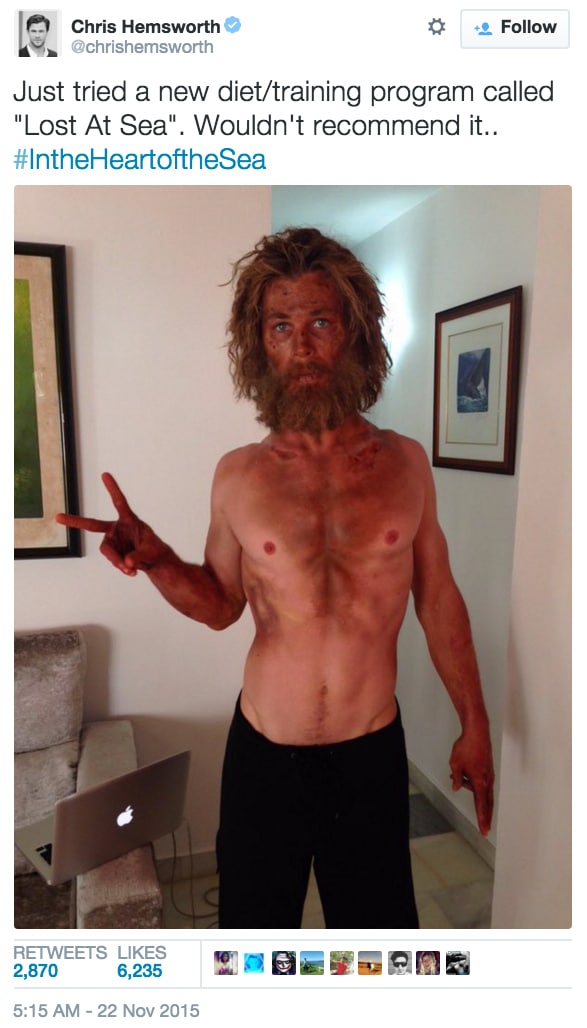 And while we appreciate the actor’s dedication to his craft, we’re pretty keen to see him return to his regular buff physique. In the meantime let’s all enjoy this clip of Hemsworth in his Thor glory days being shirtless for an entire two minutes.

Comment: What do you think of Chris Hemsworth’s shocking new look?