The Christmas Drinking Game We’re SO Playing This Year

If this doesn’t make your Christmas merry, nothing will.

Every so often a truly genius idea comes along that makes you want to applaud out loud.

The brainchild of Reddit users zeezromnomnom and Graphitas, this Christmas movie drinking game is one of those strokes of brilliance.

Known as ‘The Santa hat drinking game’, this brilliant seasonal activity involves minimal effort and guarantees maximum laughs and drunken frivolity. (Not that we endorse getting hammered here at SHESAID. *Cough*) Here’s how to play it…

1. Hang the Santa hat over the top corner of your TV and hit play on your movie.

2. Every time someone in the movie inadvertently (and adorably funnily) wears your Santa hat, everyone should take a swig (or, if you’re adventurous, a shot). Let the fun begin! 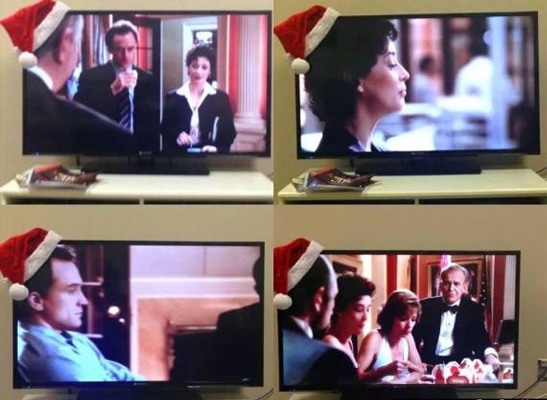 As it turns out, the game was discovered quite by accident when Reddit user zeezromnomnom decided to decorate his TV with a festive hat.

“My wife put a Santa hat on the corner of our TV. I thought it was simply a festive decoration until I started watching The West Wing.” And so a legend was born.

Prepare for hours of fun and frivolity. This game is equally hilarious if you’re having a sober Christmas and just want a few laughs. Simply swap out drinking every time someone wears the Santa hat for jumping on the spot, exchanging items of clothing with someone or saying an agreed upon phrase like, ‘Merry Christmas!’

Images via reddit.com and gif-finder.com.

Comment: Have you tried this game? What were the results?