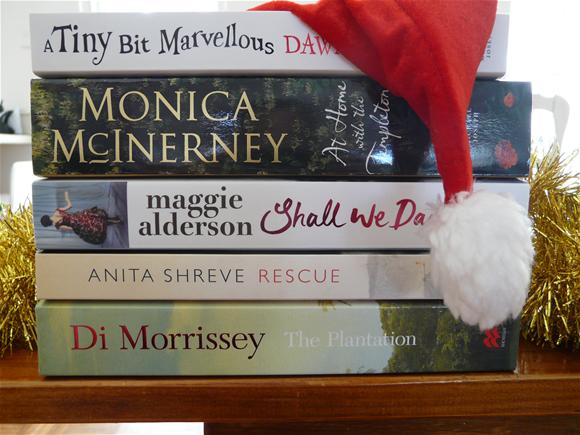 1) Shall we Dance by Maggie Alderson

Loulou Landers, London’s undisputed Queen of Vintage Fashion, meets a man on the eve of her dreaded forty-ninth birthday. He’s kind, he’s sensitive, he’s divinely handsome and he carries a designer suit like George Clooney. Unfortunately, he’s barely half her age, and Loulou’s just not ready to ‘go cougar’.

Then there is Loulou’s 21-year-old daughter, Theo, who won’t get a job, won’t move out, wears chainstore fashion, and hasn’t said a civil word to her mother for years. And she is on the verge of her own spectacularly unsuitable affair.

So how will Loulou cope with a daughter who’s off the rails, a man who won’t take no for an answer, an ageing process that won’t slow down – not to mention a birthday party in a camping ground? Like she always has – with wit, grit and an exemplary sense of style.

2) The Distant Hours by Kate Morton

“It started with a letter. A letter that had been lost for a long time, waiting out half a century, stifling summer after cooling winter, in a forgotten postal bag in the dim attic of a nondescript house in Bermondsey … Edie Burchill and her mother have never been close, but when a long lost letter arrives one Sunday afternoon with the return address of Millderhurst Castle, Kent, printed on its envelope, Edie begins to suspect that her Mother’s emotional distance masks an old secret.

Evacuated from London as a thirteen year old girl, Edie’s mother is chosen by the mysterious Juniper Blythe, and taken to live at Millderhurst Castle with the Blythe family: Juniper, her twin sisters and their father, Raymond, author of the 1920s children’s classic, The True History of the Mud Man. In the grand and glorious Millderhurst Castle, a new world opens up for Edie’s mother. She discovers the joys of books and fantasy and writing, but also, ultimately, the dangers.

Fifty years later, as Edie chases the answers to her mother’s riddle, she, too, is drawn to Millderhurst Castle and the eccentric Sisters Blythe. Old ladies now, the three still live together, the twins nursing Juniper, whose abandonment by her fiance in 1941 plunged her into madness. Inside the decaying castle, Edie begins to unravel her mother’s past. But there are other secrets hidden in the stones of Millderhurst Castle, and Edie is about to learn more than she expected. The truth of what happened in the distant hours has been waiting a long time for someone to find it.

Peter Webster is a rookie paramedic sent out on an emergency call that will change his life: he pulls a young woman out of a car wreck that should have killed her. Despite his misgivings about getting involved with a patient, Sheila haunts his thoughts. Soon he is embroiled in her troubled life and a tempestuous love affair begins. Nineteen years later, Sheila is long gone and Webster is raising their daughter, Rowan, alone – until a phone call from Sheila alters their quiet existence once more.As Sheila reenters their lives, long-buried questions emerge.

Why did a mother leave her family? How did the marriage of two people so deeply in love unravel?

A story about trespass and forgiveness, secrets and the seismic force of the truth, RESCUE is a masterful portrayal of a family trying to understand its own fractured past and begin again.

4) Memoirs Of a Showgirl By Shay Stafford

Colourful memoir about living your dream – from ballet classes in Brisbane to principal dancer at The Lido, Paris.

Shayleen Ann Stafford was the middle child sandwiched between two sporting brothers. Her dad was a former rugby player and a welder by trade, her Mum was a nurse. No one called her by her first name, to family and friends she was always Shay. Her early life was a combination of swimming, sport and backyard trampolining until she turned six and started ballet classes, but only for a year. The TV show Fame’ inspired her to give dance another go. This time she was hooked and she devoted her teens to dance, performing at eisteddfods and shopping centres, never thinking that she could make a living as dancer. But at the end of Year Twelve she did, scoring a coveted dance role in a Brisbane cabaret show choreographed by Todd McKenney. She went on to dance in Japan and Malaysia and then found herself in the Moulin Rouge chorus line. Her hard work and high kicks were noticed and she went on to become the principal dancer at the famous Lido.

5) At Home with the Templetons by Monica McInerney

Other people’s families aren’t as perfect as they seem. When the Templeton family from England takes up residence in a stately home in country Australia, they set the locals talking – and with good reason. From the outside, the seven Templetons seem so bohemian, unusual… peculiar even.
No one is more intrigued by the family than their neighbours, single mother Nina Donovan and her young son Tom. Before long, the two families’ lives become entwined in unexpected ways, to the delight of Gracie, the sweetest of the Templeton children.

In the years that follow, the relationships between the Templetons and the two Donovans twist and turn in unpredictable and life-changing directions, until a tragedy tears them all apart. What will it take to bring them together again?

From Australia’s top-selling female novelist comes her best book yet – a wonderfully entertaining and touching story about the perils and pleasures of love, friendship and family.

This first novel by Dawn French is told through the eyes of a mother and her two teenage children. There’s seventeen-year-old Dora, a stroppy teenager who’s just come out of her first relationship (it lasted a whole six weeks) and who’s longing to escape to university; her long-suffering mother, Mo, a child psychiatrist who’s baffled by the antagonist behaviour of her children; and sixteen-year-old Peter, who prefers to be known as Oscar due to his obsession with Oscar Wilde.

Written in diary format, with each chapter narrated by a different voice, this is a hilarious, sharp and utterly compelling novel about the ups and down of family, sibling rivalry and growing up. With each chapter told from the point of view of one character, Dawn French’s witty and engaging novel offers us an honest and insightful account into the relationships between children and parents.

Maeve Binchy is back with a tale of joy, heartbreak and hope in a close-knit Dublin community.

Baby Frankie is born into an unusual family. Noel and Lisa are among the most supportive parents at the nursery school. They are never late to pick up their little girl, always patient and delighted to see her at the end of the day. But in fact neither of them are Frankie’s parents. They have no blood relationship at all to this little girl. They are there first because of a promise and they stayed because Frankie had become a life-line to them both. She was the only reason their lives stayed on track and because of her they found the strength to fight their demons.

The problem was keeping this secret far from the eyes and ears of the social workers. If it were known that Noel was an alcoholic and Lisa a serious fantasist Frankie would not remain another day in their care. And yet if she were to be taken away, lives would be destroyed.

Families are changing all the time – why not give this one a chance? Because the law is against it, that’s why. And Moira is having none of it. She knows what’s right, and has the power to change the course of Frankie’s life …but Moira is hiding secrets of her own. Minding Frankie is a story about unconventional families, relationships which aren’t quite what they seem, and the child at the heart of everyone’s lives …

8) The Plantation By Di Morrissey

When Australian Julie Reagan discovers a book written about wild Malaysia in the 1970s, she decides to find out more about the author – her great aunt. Why did her grandmother refuse to speak about her sister who disappeared from the family, 60 years before? What caused such a severe rift?

Julie is invited to stay with her cousins who run the plantation founded by her great grandfather in Malaya a hundred years ago, and she decides to visit in the hope of finding clues to this family mystery. What Julie finds sends her spiralling through generations of loves, deaths, tragedy and the challenges of the present until she discovers her grandmother’s shocking secret.

Eleanor Levine left Ireland seventy years ago with little more than a suitcase and her mother’s handwritten recipe book. Now, a lifetime later, she’s returning from New York with hard won wisdom and memories of her own. A renowned psychoanalyst, Eleanor knows there’s one final journey she has to make…

Lovely young actress Megan Bouchier didn’t have to chase success – it arrived effortlessly. Fame was what she always wanted until a disastrous affair made her the wrong kind of headlines – now Megan needs a place to hide…Darkly beautiful Rae is a wonderful wife, a loyal friend and a dedicated community carer. From Titania’s Tea Rooms she dispenses tea and sympathy to everyone – until a painful secret from her past threatens everything she holds dear. Big-hearted teacher Connie O’Callaghan has given up on love. She’s cheerfully approaching forty and besides, why does no man ever match the heroes in her beloved romantic novels?

As Eleanor re-reads her mother’s comforting words and watches life unfold from her window in Dublin’s pretty Golden Square, she slowly becomes drawn into the lives of Megan, Rae and Connie. But can treasured wisdom handed down from mother to daughter really be relevant today? And what are the ingredients for a life well lived?

Love hurts. There is nothing as painful as heartbreak. But if you are to ever love again you must learn to trust again.This is the story of Katie, who appears in a small American town where her sudden arrival raises questions about her past. Beautiful yet unassuming, Katie is determined to avoid forming personal ties until a series of events draws her into two reluctant relationships. Despite her reservations, Katie slowly begins to let down her guard, putting down roots in the close-knit community. But even as Katie begins to fall in love, she struggles with the dark secret that still haunts her . . . Eventually, though, Katie must come to realize that she must choose between a life of transient safety and one of riskier rewards . . . and that in the darkest hour, love is the only true safe haven.