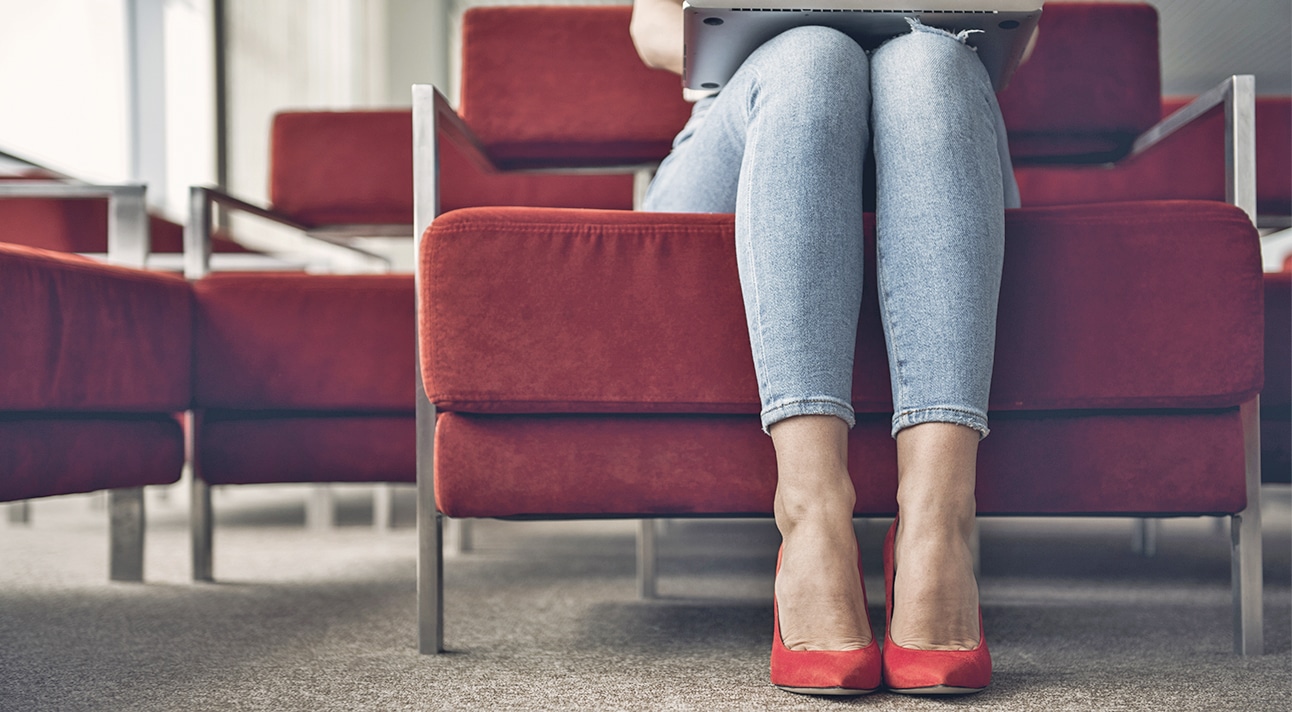 Don’t tell me my dress looks good on me between the hours of nine to five.

“I’ll sit at the back, next to her. She’s got the best legs in here!” an older male colleague joked, as he filed into the crowded meeting room and took a seat beside me.

There are many other places I would rather have been at that moment. Back in the privacy of my office cubicle, at home washing my wildly overdue laundry, walking barefoot over a pile of broken glass – literally ANYWHERE, but next to this man. This man who, with one “harmless compliment”, made me feel like the smallest person in the room.

That’s the thing with “harmless compliments” in the workplace. On the surface, they often appear jovial and well-meaning – but behind every forced smile, fake laugh, and eye roll, they detonate a woman’s worth in an already masculinised space. It is, after all, not even a century since women were afforded the opportunity to work at all. It wasn’t until 1942, we were allowed to move beyond the domestic space and take on jobs traditionally classified as “men’s work”. And some eight decades later, we’re still fighting for the right to be recognised equally via our paychecks.

It’s somewhat unsurprising – albeit depressing – then, that this culture of dismissiveness and derision toward female employees lives on in the more subtle corners of gender inequality today. And nowhere, NOWHERE, is it more insidious than in the so-called “harmless compliments” we’re encouraged to accept with smiles and bashful laughter each day.

Take a compliment, would ya?

On my first shift in a new job at a glossy magazine, my computer screen froze. Thankfully, the IT department was impressively responsive.

“I’ll be over at your desk in a minute,” came the email back to my issue lodgment.

A few moments later, a friendly older man appeared at my desk.

“Not to worry. I’ll be your Superman,” he grinned, leaning across me to tinker with a cord at the back of my monitor.

“You know, we’re like Beauty and The Geek, you and I. I’m obviously the geek!” he laughed, as the pixels on my screen began to dance around.

I suddenly felt incredibly uncomfortable, and willed the computer to unfreeze itself so he’d leave…

“That dress looks great on you,” another male coworker told me one day as he stepped into the lift – his eyes scanning up and down my body.

Yet again, I found myself smiling through gritted teeth, silently praying I could materialise and be somewhere, anywhere, but in that seven-foot-square box.

“You look beautiful today, Princess,” the courier chirped as I signed off for a delivery, recently.

I gave a forced grin and beelined it back to my desk, feeling my face turn hot with equal parts embarrassment and annoyance.

In all of these situations – which are just a few of countless similar interactions I’ve had, and no doubt every woman reading this has had – I felt stupid. Stupid for feeling so uncomfortable. Stupid for letting it make me a little less on my game for the rest of the day. And stupid for finding myself so easily upended by the interaction. Because, like most women, I’ve been told to “just take a compliment” or risk being labelled “uptight” or – the one I hear most frequently – a “feminazi”.

Except that, if you know me, you know that, while I’m certainly pro-equality, I’m definitely not averse to male attention. I’m a shameless flirt when I meet a guy I like, and I’m absolutely not opposed to a date telling me I look beautiful, or sexy, or any version thereof (especially as that’s usually my objective).

The difference is, I’m not there to get a job done. I’m not there swimming upstream, attempting to shed any aspects of my femininity that may see me perceived as less “capable”, “resilient” or “committed” (the buzzwords reeled off when a woman is overlooked for a promotion in place of a male coworker) to getting said job done. Because research indisputably proves the fact that, simply because of my gender, I have to work harder than the men in my office to be taken seriously. In fact, the Westpac 2016 Women of Influence Report revealed male managers are rated roughly nine per cent higher than female managers when it comes to their ability to command respect, regardless of their actual capability.

More so, countless studies have highlighted the disproportionate amount of attention already given to women’s appearances at work. Most strikingly, a paper published in the June 2016 issue of the Journal of Social Stratification and Mobility, in which more than 14,000 people were surveyed on their income and grooming habits, found women who spent more time and money on their hair and makeup earned significantly more than their bare-faced female colleagues.

But, “POLITICAL CORRECTNESS HAS GONE TOO FAR!” I hear you scream. “WHAT’S NEXT?! We ship all the men off to Mars and leave them there??!!”

To that, I say, since when did being PC equal basic human decency? Because, if you wouldn’t say it to a male colleague, you need to stop and ask yourself, why is it appropriate then, to say it to a female colleague?

Sure, I’ve told the odd male coworker I liked the colour of his suit, but to date I’ve never announced a colleague’s legs looked great in his work pants, or informed him he was looking particularly attractive in his business shirt.

The problem with so-called “compliments” like these in the work environment, is, rather than elevate the receiver, what they actually do is systematically reduce their currency to their appearance. At best, it’s a self-serving exercise, and at worst, it’s sexual harassment. And while most of us think of sexual harassment as the more overt, sleazy, Harvey Weinstein kind that’s been dominating popular media this year, the reality is, sexual harassment is any kind of unwanted attention that makes someone feel uncomfortable and ultimately starves them of their power.

And it’s now so insidious and widespread, the Australian Human Rights Commission (AHRC) last month announced it was launching an independent national inquiry into it. At present, it’s estimated at least one in 10 women are being sexually harassed at their current workplace, with new research suggesting an overwhelming number of female employees don’t feel they’re treated with respect.

Enough with the compliments

When I first began my career, I was pulled into a male manager’s office and complimented on how I looked in my dress, before being advised to strongly consider wearing pants from thereon, as my calves were apparently “distracting” the men. (Not that it should matter, but I was wearing an incredibly conservative knee-length dress at the time).

I’ve also had a coworker tell me “You look great today, I see you’re not wearing a bra?” and have watched on as fellow female employees have visibly cringed through compliments like, “You’ve lost so much weight, you look fantastic!”, “That top really matches your eyes,” or, “You should wear a dress sometime. It’d really suit you.”

Newsflash: our weight is none of your business. Our outfit is not up for commentary. And we don’t want to know if you think we look good. We want to know if we’ve done a good job.

A compliment might seem harmless enough, but lookism-based comments only serve to further widen the gender gap in the workplace, reinforcing the same sort of ridiculous ideology that saw TV presenter Lisa Wilkinson publicly crucified for her on-camera outfits while her male co-host wore the same suit for two years running without acknowledgement.

Here’s an idea: let’s focus on what female TV personalities like Lisa do in their job, rather than how they look doing it.

So next time you want to make a female colleague feel good about herself, please, tell her what a great job she did on her presentation, commend her on her networking skills, or praise her on the report she just wrote.

Just don’t tell her she looks great in that dress. Because she’s not wearing it for your attention, or your approval. She’s here, at work, to get a job done.

Comment: Where do you stand on looks-based compliments in the workplace – okay, or not okay?