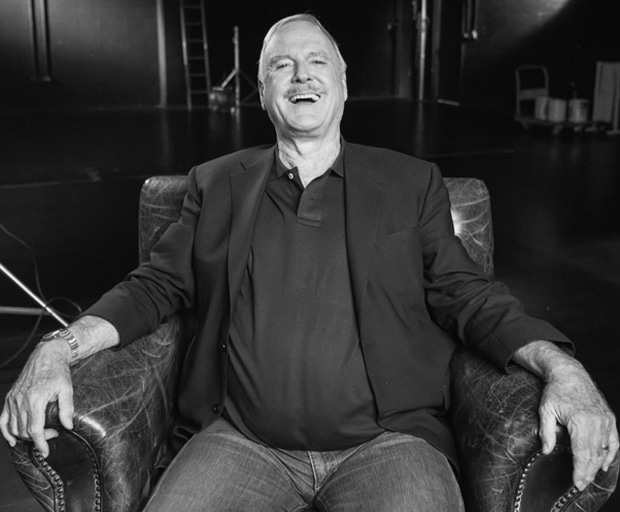 My Friends Dumped Me When I Had A Baby

“If people make you laugh, you like them, even if they’re being fairly awful!”

Everyone I know grew up on Fawlty Towers, or Monty Python, or the myriad of other credits to his name. The guy invented a genre of comedy, for crying out loud, and introduced the word ‘Pythonesque’ into British vernacular.

He’s not just a famous person, he’s a genius, legendary, next-level superstar. Needless to say, when I found out I was to interview John Cleese about his upcoming stage adaptation of Fawlty Towers, all thoughts of the calm decorum I try to maintain around celebrities went flying out the window.

When I arrive at Sydney’s majestic Four Seasons hotel, Cleese’s publicist politely escorts me to the interview room. As I sit waiting, clutching my notes for dear life, I reflect on what is about to happen. I’m about to get a 45 minute interview slot with one of the most iconic people in the entertainment industry. How will I engage him for that long? He’s definitely more interesting than me, and much funnier (which is saying something because, let’s face it, I’m pretty funny). What could I possibly have to say that could be of interest to him?

Suddenly, Cleese’s presence fills the room like helium in a balloon; instantly buoying everything up with an invisible energy.

“And what are you doing?” he says, in that ever-classy British twang.

“What?” I blurt out, instantly cursing myself. It doesn’t seem to deter him. I realize he’s holding my hand and swinging it back and forth like we’re kids in a playground.

“Are you interviewing me?” he continues, without breaking eye contact.

I smile and sit down. Though ever energetic and engaged, Cleese’s weary eyes belie his exhaustion; evidently I’m catching him at the end of a very long day.

“Could I have some coffee, please?” he asks his publicist, before turning to me. “I just need a little bit of caffeine. Would you like one?”

I decline, knowing any hint of caffeine will send my already fired-up brain over the edge. As the publicist exits the room, Cleese turns back to me, a twinkle in his eye.

“Then, I’m going to get drunk on merlot,” he says, without any affectation. Of course, this dry delivery is what makes British wit so damn funny, and characters like the iconic Basil Fawlty, so likeable, despite their inherent flaws.

“People love him, but they wouldn’t like him if they were in the same room with him,” Cleese says of his alter ego.

“All that stuff in the flesh; I don’t think it would be so funny in reality. But if people make you laugh, you like them, even if they’re making you laugh by being fairly awful! The most important thing is that the audience likes you. They’re more likely to laugh if they like you.”

And when it comes to getting his audience fired up, one thing Cleese isn’t shy of poking fun at, is himself. Even in an interview with a nerve-wracked superfan.

“You see, when I laugh with my wife – my fourth wife, when I finally got it right…” he smirks.

“…there’s a moment of connection which is so utterly unfakeable. Because that laughter, real laughter, comes from deep inside your personality. When you laugh a lot with someone like that, you have a wonderful relationship.”

And Cleese isn’t up for letting anything stifle that laughter, including political correctness.

“I didn’t want to do the stage show in England because it’s a miserable, negative place. The newspapers don’t like me because I criticize them. They criticize everyone else: politicians, civil servants, football managers – I don’t know how they stand the abuse. But when I start criticizing them, they don’t like me, and it affects the reviews. It’s very personal in England; not so professional.”

It’s hard not to be a little shocked by Cleese’s brutal analysis of the British media, but I’m nonetheless impressed at his ability to be so utterly candid.

“The dead hand of political correctness,” he says, rolling his eyes.

“It’s like being in a Communist state! You might say the wrong thing and they report you to the Fun Police. I made up a joke this morning… How many Fun Police does it take to screw in a lightbulb?”

“I’m not sure,” answers his publicist.

“What do you mean you’re not sure?!” he comically explodes, in a tone only someone whose alter ego is Basil Fawlty could pull off.

“It could be ferret pâté, for all I know!”

Cleese’s ability to effortlessly wisecrack intermittently is extremely charismatic. I’ve met many a self-proclaimed comedian unable to have an engaging chat without constantly trying to be funny. The capacity to do both, with equal success, is close to genius.

“Now where was I?” he continues.

“Oh yes. The PC Police experience this warm glow of self-righteousness, when you’ve proved you’re a ‘better’ human being than someone else. I think it’s absolute bullshit. They’re silly, inflated people. A good basis in life is simply being kind. Don’t be unkind to people – that’s the only rule you need. You don’t need to restrict everything everyone says.”

“Yes!” I agree, ecstatic we share the same views.

“The most relaxed and philosophical people don’t complain, and the most neurotic and sensitive people do. And it’s our fault for listening to them,” he emphasizes.

“If you meet anyone who’s putting other people down, it’s more than likely they’re putting themselves down even harder in private. Most of the time they’re getting offended on somebody else’s behalf. How do you talk about a sense of humor if you don’t have one? Aside from anything else, it’s killing comedy.”

And if there’s one thing the wise-cracking comedian is deadly serious about, it’s the continued place of comedy in society.

“Comedy is critical. You can’t make a joke about somebody who’s perfect. They’re not greedy, they’re not angry, they’re not mean, and these are the things we laugh at.”

It may explain why Fawlty Towers‘ characters are far from fault-free, and notorious for their blatant disregard of political correctness.

“I think if it’s a Cleese script, people aren’t going to come if they don’t like my kind of humor. I make a point not to care what I say.”

It’s hard to talk comedy with Cleese and not bring up one of his greatest works, Monty Python. I confess to him Monty Python’s Life of Brian was the first time, at the age of 15, I had seen full-frontal nudity in a film.

“Ah yes, Graham Chapman,” he says, roaring with laughter at this revelation.

“One of the few uncircumcized Jews in the world. That was a very funny continuity error. Then comes almost one of the best lines in the movie: ‘Alright, I am the Messiah. Now fuck off!’ I loved putting ‘Messiah’ next to ‘fuck off’.”

Now it’s my turn to laugh. Together we begin to quote all our fave one-liners from the show. All I can think is, ‘I’m laughing with John Cleese about Monty Python. Who the hell can say they’ve done that?’

Besides its raucously funny script, Life of Brian touches on the more serious issue of hypocrisy in religion.

“One of the most chilling things anyone’s ever said came from the Jesuits: ‘Give me a child before the age of seven and I will make him ours for life’,” Cleese says, a dark expression coming over his face.

“That’s not what Jesus said. I think one of the best things Christ ever said was, ‘Let he who is without sin cast the first stone’.”

Suddenly I realize those 45 minutes I fretted about are almost up and I’m getting the wind-up signal from Cleese’s publicist.

“We’re in injury time. Go on, last question,” he prompts.

I realize I actually don’t need anything else. Cleese has given me much more than I needed. I didn’t even look at my notes.

“Well, actually, we’ve had a real conversation,” he says, looking at me thoughtfully.

As I’m whirled out of the Four Seasons, I’m filled with gratitude for those 45 minutes I got to spend with my idol, and for everything I learnt in his presence. And chomping at the bit to see Fawlty Towers when it hits the stage this August in Sydney, Australia. I have a feeling it’s going to be a cracker of a night, and not at all PC.

Fawlty Towers the stage show hits the Roslyn Packer Theatre in Walsh Bay, Australia on August 19, for four weeks only. Get your tickets here.

Comment: Are you a Fawlty Towers fan? What’s your fave Basil Fawlty moment?

11 Hilarious Memes That Sum Up Being In A Relationship

17 Thoughts Every Woman Has Had During Bad Sex

11 Valentine’s Day Fails That Will Crack You Up