How I Turned Clubbing Into A Career

My job is all about making people a superstar.

I started dancing when I was only two years old.

It was very casual, you know, only one day a week. A few years later my dance teacher told my mom to take me for an audition and I landed my first theater job as a dancer when I was eight. I remember getting my first pay packet, taking it to my mom and saying, what is this? I just had no idea.

From that first professional stage experience, I knew dance was it for me. I realized early that being a young dancer meant getting the work done and going to school the next day over and over. But I was also inspired by the first professional choreographer I worked with, and the performance made all the late nights worth it. The build up to that moment always got me excited – it was why I loved being a dancer.

But around ten years old, I wanted a bit of a break. I took a year off of dancing. I think at that moment I felt I had missed out on a lot. The older you get, the more dance classes you are able to take, so it ended up being much more than a one night a week commitment. It was a lot at that age.

After that year, I went back to dance. I started training professionally in Glasgow and three years later got a scholarship to continue training in London.

In my first year of professional dance training, we were all told it’s not an easy game. You will be knocked down when you think you’ve done the best audition ever. There may be some people in the industry who will stab you in the back or not speak to you because you did a better job than them. And that unfortunately is the truth.

In my few years of training we had a mock audition with a judging panel who came in specifically for this assessment. I did personally really well and some others perhaps weren’t at the level of dance that I was at the time. I had a lot of friends who I had been in the course with for over a year who fell out with me because of the assessment outcome.

To be a dancer, you need to build a thick skin. Maybe for me that developed through the theater auditions.

After graduation, I auditioned for the Glasgow Rockets. As a professional dance job, it was pretty intense. We trained every week and had to re audition every year in front of professional choreographers, dancers, and judges, and pass a fitness test. Your position the squad was never a given even if you spent two or three years previously with them. But I danced and traveled the world with them, performing at events for thousands upon thousands of people.

I think growing up as a teenager and in my early 20s I had the energy to dance and I knew that that was never going to last forever so I really wanted to squeeze all of that in. But I always wanted to have my own dance studio.

After a couple of years with the Glasgow Rockets, I migrated to Australia and started my own dance studio. Since I was in a new place I thought, I don’t know many people here, so if I fail miserably it’s fine. I’ve got nothing to lose, but I can at least I tried.

⚡️Did you know that we have a BeBaby Ballet class every Monday morning? ⚡️ ?⚡️?⚡️?⚡️?⚡️? They’re casual classes and are at the perfect time of 10:30am! ⚡️?⚡️?⚡️?⚡️? All you need to do is download the app to book @mindbodyonline or go through our website ?? #bedancefit #bebabyballet #babyballerina

I launched a kids dance class, and the first lesson was much better than I expected. I had about 17 children there on the first day, which is pretty good considering I hadn’t done any teaching in the local area.

Now I’ve managed to open up a dance studio called Be Dance Fit, and I run a 36-class-a-week dance schedule. The classes are a mixture of kids dance, adult dance, and adult dance fitness.

There are lots of schools who will drill the kids on having the perfect toe or the perfect plie, but at the end of the day when they are 17 or 18 kids in a class, there will be one who may go forward for a career in dance. I understand not everyone will become a professional dancer. It’s just not going to happen. Instead I wanted to create a school where people could come to dance without any ambition to become a professional dancer, but still want to be taught the routines because they love to do it anyway.

A friend of mine back in Glasgow also owns a studio and started running a class called Clubbercise. It replicates a night out or the clubbing experience but without alcohol. There are exercises but most of it is dance, lights, and glow sticks. I had seen pictures of the class and thought it looked cool so I emailed Clubbercise, thinking in my head that nothing would come out of it, but they got back to me and we set up a meeting.

Repost @clubbercise ??????? So excited to be apart of the biggest fitness trend to hit AUS! ??????? ??CLUBBERCISE ?? @bodyandsoul_au Check the link in our bio to find out more! #bedancefit #clubbercise #clubbercisewithjade

At that point, Clubbercise was going really well in the UK but they hadn’t thought about branching out internationally. We had a couple more meetings and then I started to run the classes in Australia.

One of the big, popular classes I teach is on Monday night, and that day can just be a drag for most people. The class is adults only and so it becomes a time when they can forget about everything for an hour.

At Clubbercise, you don’t have someone in your face shouting at you for another five repetitions. If you want to have a drink during one of the songs during the class, you go and have a drink. Don’t wait for the DJ to stop because the DJ does not stop until the end of the class. So people don’t feel under pressure. They come, we dance. Everyone comes in happy and walks out even happier, so that’s the main thing.

Since I was a teenager, I started getting interested in fitness, which is now why I combine the two in classes. I was a very driven dancer. In my third year of training, I didn’t want to be doing push ups on my knees. I wanted to be doing the same as the boys and doing push ups on my toes. Dance training was obviously very important to me, but I was also aware of the fitness element behind dance. I wanted to be able to be physically strong throughout an entire performance on stage.

But I just couldn’t run to save myself. I could dance a five or six minute piece on stage with people looking at me, but couldn’t run a kilometer which really would take about the same amount of time. 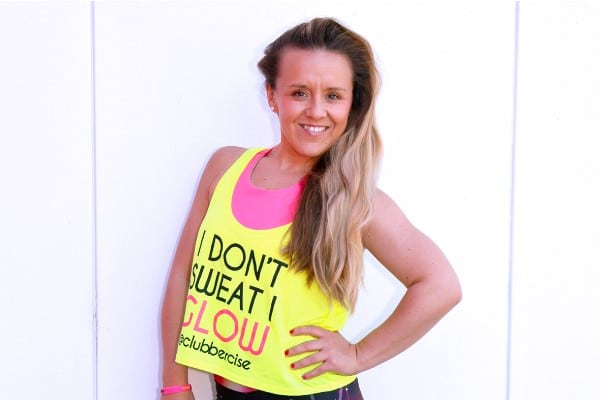 Then the importance of fitness and the science behind being physically able to move the way dancers move became just as important as dance to me. It ignited this little spark in me. I actually really enjoyed it. A year after I moved to Australia I signed up to get certified as a fitness trainer and instructor, and now I’m a master trainer. Now I combine fitness with dance with a much better understanding of how to teach children how to explore their power and explosive energy.

Images via tumblr.com and instagram.com.

*As told to Josie Gleave.