Date Night Movie: Furious 7 Is A Hell Of A Ride

Are you looking for a Friday night date-night movie this week which you and your partner can both enjoy? You could do a lot worse than Furious 7, aka Furious Seven and Fast & Furious 7.

My husband and I paid a babysitter to mind our two banshees, sorry toddlers, while we happily trotted off to the movies for a date night earlier this week. It was “his” turn to choose a movie and so Furious 7 it was. Our respective reviews are below.

Judging by its box-office records, US action movie Furious 7 is delighting hardened action movie nuts the world over – and causing them to shed some serious manly (and womanly tears) in the process – since its early April release.

For the James Wan-directed film gives lovers of the franchise exactly what they have come to love and expect: high-octane drama, death-defying stunts, tits and arse aplenty and then there’s the cars – seriously swoon-worthy and very, very fast, luxury American, French, Japanese and Italian sports cars. I don’t even love cars, but even I wanted to ditch my sedate family car for something super shiny and fast, post-film. 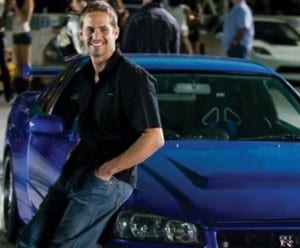 In addition, the film’s release is poignant and bittersweet as it marks the untimely demise of Fast & Furious star Paul Walker (pictured), who appears in it in one of his final roles after a 2013 car crash claimed his life at age 40. Indeed, Walker’s role was only finished via the wonders of digital technology and a series of stand-ins. And so the film acts as a kind of memorial to Walker, with the tribute to the late actor at the film’s end very touching.

I quite like action films at times, truth be told, but this was my first look at one of the Fast & Furious films. It was exactly as I expected: big and dumb, but highly enjoyable.

It’s the type of big action movie adventure during which you can happily turn your brain off on a Friday night and just enjoy the ride. At 137 minutes-long, I did find my mind wondering and erm, myself dozing off a few times during the somewhat repetitive action scenes towards the end.

Starring the one-dimensional man mountain Vin Diesel, who seemingly only has a grand total of two facial expressions in his acting repertoire and the slowest, weirdest turn of the head, which would easily score him a starring role in Neighbours, Furious 7 is essentially a revenge action film. 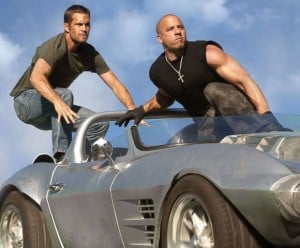 To sum up, without giving too much away: homicidal London killer Deckard Shaw (Jason Statham) is plotting world domination and vengeance after Dominic Torretto (Vin Diesel) and his crew put his maniacal international terrorist brother into a coma.

Aside from a weird cameo by Aussie rapper Iggy Azalea; the film also stars action greats Kurt Russell (pictured below), and Dwayne Johnson, aka The Rock, and the best, bad-arse gal in town, Michelle Rodriguez (pictured). 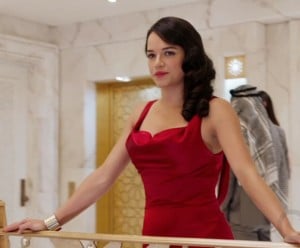 For me, Rodriguez is one of the best things about this film – aside from the crazy, sweaty-palms inducing stunts and very fine automobiles. She’s smart and sassy and kicks some serious arse like nobody’s business, all the while looking gorgeous, feminine and strong – this is no easy feat – and I can’t remember the last time I saw a female action character of her calibre on film.

All in all, I enjoyed Furious 7. I give it a solid three muscle cars out of five.

I really enjoyed the movie. There’s non-stop action and not a great deal of storyline to confuse anybody; it’s a great piece of escapism.

Exotic locations, extreme car chases and lots of fist fights are the order of the day. However, I couldn’t help but to compare it to the other films in the franchise in an effort to determine where it fits in. 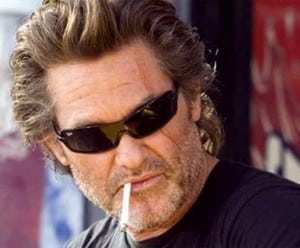 There’s very little character development and let’s face it, we’ve had five other films (not including the semi-spin off Tokyo Drift) to explore these one-dimensional heroes. However, unlike Tokyo Drift and others in the franchise, the emphasis in this film seemed to be less on the cars and more about action-fight sequences.

I almost felt as though I was watching a James Bond movie with far-away locations, pretty girls and action sequences, tied together with an almost non-existent plot. And that’s not a bad thing. Overall, four out of five muscle cars.