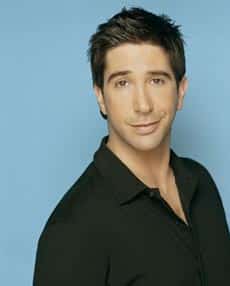 The former “Friends” star is engaged to his girlfriend who is almost 20 years his junior. Healthy age gap or not? You decide.

David Schwimmer has got engaged to his English girlfriend Zoe Buckman after she recently moved to the US to be closer to him.

The 43-year-old actor has been dating the 24-year-old photographer since they met in 2007 while he was working behind the camera on the film “Run Fatboy Run”.

A friend said: “David is smitten with Zoe and says she is ‘The One’. Things have moved very fast. He wanted to see how they got along living together and it has been a big success.”

It will be the first marriage for both Zoe and David, who has previously dated Aussie singer Natalie Imbruglia, and will be another one for the “mind the gap” club.

Nineteen years is a significant age gap for any couple. What do you think?

In other “Friends” news, both Matthew Perry and Matt LeBlanc are returning to TV.

Perry will star in a show called “Mr Sunshine” about a sports arena manager who has a midlife crisis as he enters his 40s and is dumped by his girlfriends.

While Matt LeBlanc will star in a show about a hit British comedy that is imported by an American network.