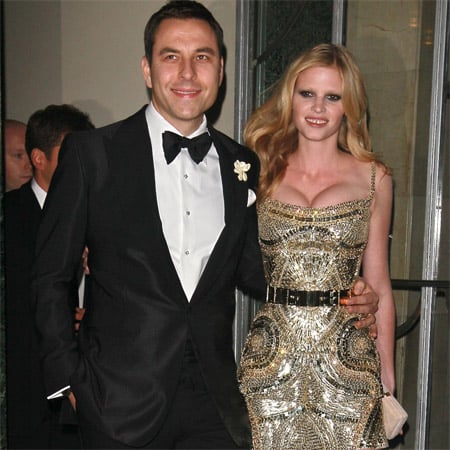 A celebrity guestlist including Geri Halliwell, Sir Elton John, Tom Ford, Noel Gallagher and Russell Brand were among those to attend the wedding ceremony and the reception at Shoreditch House.

David’s comedy partner Matt Lucas provided the biggest laugh of the day when he came to the reception dressed as his ‘Little Britain’ alter-ego, fat-fighter Marjorie Dawes.

Guest Ronnie Corbett said: “The funniest moment was when Matt came in. He’d taken all the trouble to bring a wig and costume and brought in the cake dressed up as his ‘Little Britain’ character. It brought a huge cheer.

“The whole atmosphere was of loveliness and glamour from a day gone by. I’ve never seen so many white roses, there were hundreds and I’ve never been to a more beautiful service in my whole life, it was perfect from beginning to end.”

Guests at the event witnessed David and Lara – who at 26 is 12 years younger than her new husband – sign the register to John Barry’s instrumental version of ‘We Have All the Time in the World’ before heading to the reception where they dined on lobster salad and seared sea bass prepared by chef Martyn Nail.

Lara’s father Michael Stone admitted he was “very proud” of his daughter – who wore a dress by Givenchy designer Riccardo Tisci – and revealed the newlyweds are “over the moon”.

He said: “Lara looked beautiful and it was a wonderful day. I’m very proud. There were so many lovely moments and I can tell you that both Lara and David are over the moon.”

Shesaid said: When it comes to love, does age matter?