A Day In The Life Of… Anna Allbury

Ever wanted to step into somebody else’s shoes for the day and see what life is like as a magazine editor, a professional sportsperson or corporate high-flyer..? Well, SHESAID is giving you the closest thing to your very own Freaky Friday experience with our A Day In The Life Of… series.

RELATED: A Day In The Life Of… Lauren Hannaford

Name and role: Anna Allbury and I am a writer/producer of kids television by day and creator of My Hippie Kitchen by night!

Tell us about My Hippie Kitchen.

My Hippie Kitchen is a web series featuring creative food and edible flowers, made by me in my little apartment kitchen. Each episode is inspired by a different aspect of life in Melbourne – a botanical antipasto platter inspired by the Royal Botanic Gardens, an edible coffee inspired by Melbourne’s world famous coffee scene, street art ceviche – you name it! My belief is that we’re all fully qualified to play with our food. I’ve had no formal food training – It’s all about just throwing caution into the wind and giving it a go! All 7 episodes are online at www.myhippiekitchen.com, as well as downloadable recipe sheets. They’re the kinds of concepts where you can follow the recipe to the letter if you like, or, you can take the idea and make it your own.  That’s something I absolutely welcome and encourage! 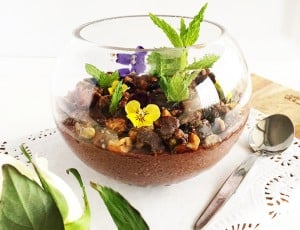 When did you discover your talent? What made you want to follow it into a career?

It’s been a slow and natural progression. My Hippie Kitchen was really born out of my Instagram account @highheeledhippie. I’ve always loved cooking and food, and over the last couple of years, I’ve just been sharing what I create on social media. The great thing about social media is that it’s a wonderful platform for all things niche, it’s a great way to connect with people all over the world who are interested in the exact same thing as you.  Even if it is eating flowers and playing with food! It’s so important to share your work, because great things can come from it! From there a friend of mine asked me to do some creative menu consulting for his cafes, and that was a real buzz – seeing something that was once in your brain on a menu and being ordered by the people at the table next to you! After that, I embarked on a culinary trip around Europe for a bit of time out and inspiration. I learned how to make croissants in Paris, pasta in Italy, ate at my idol Heston Blumenthal’s Dinner, and got out of my comfort zone for long enough to return to Melbourne with a fresh perspective. I think prior to that trip I was scared to create something like My Hippie Kitchen, I had all those normal self-doubts and fears – but something about being away blew out all of those cobwebs and I realized that I had to follow through and create the ideas that were inside of me. We’ve all got our own unique voices and talents, and I think the greatest disservice we can do ourselves is ignore those hopes and dreams for fear of failure, or not being good enough. That’s the other thing about travel, it makes you realize how lucky you are to be born into a life where you actually get to choose what you want to do with it. So many people in this world don’t get that choice – and to not make the most of that gift seems completely insane!

Everywhere!!  Since I’m obsessed with food and creating an experience with it, my mind is always going. A perfect example is when I first had the bolt of inspiration for my vegan eggs. I was standing in a queue at lunch at a bakery and I looked at this basket full of pastries. I saw one with what looked like an egg yolk in the middle – then realized it was an apricot halve. Duh. Then a little light bulb in my head went… DING! And a few days later, I made vegan eggs using an apricot halve as the yolk, and coconut yoghurt as the white. 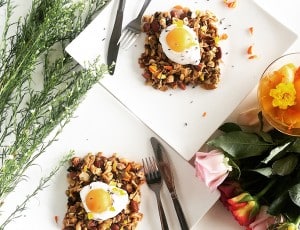 Your workdays are much more exciting than the average 9 to 5. When you’re working on My Hippie Kitchen, what does a typical day involve?

For me, every day is a different adventure! My Hippie Kitchen is a project I’ve created in my spare time, on top of my 9-5 job, which is writing and producing kids television. Safe to say when I’m working on My Hippie Kitchen, things are very busy for me – but it’s about finding ways to keep the balance and make sure you’re looking after yourself! A good day for me looks something like this:

6.15 am Early morning vinyasa flow yoga. I love it because as well as being great for the physical body, starting the day with a bit of mental stillness and meditation really helps boost creativity during the day – and that’s vital for me!

8.00am Before heading off to work, often I’ll experiment in the kitchen with breakfast. That’s the great thing about My Hippie Kitchen, I’ve been able to build creating recipes in to my day to day life – a girl’s gotta eat! Some of my favourite ideas have been created in this space – the frozen breakfast flowerbomb, the breakfast bouquet! So often it’s not something I’ve really planned, just free-styling and playing with what I’ve got in the kitchen, and ideas I’ve got in my brain – then grabbing a quick snap of it for instagram so it’s documented! From there I grab a quick takeaway long black from my favourite café on the corner, jump in the car and head off to work.

9-5pm My day job.  As a writer and producer of kid’s television this can be anything from creative brainstorming sessions, writing scripts, directing field shoots, producing on the studio floor, dressing up as a crayfish, over-seeing edit sessions, and more! I feel really lucky to be able to work in a job with so much variety, with the added bonus of wonderful people. 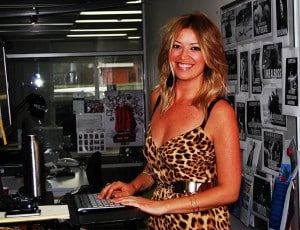 5-9pm Home time! When I’m in the throes of production with My Hippie Kitchen, my evenings are spent at home editing scripts, building / maintaining the website, taking a look at rough cuts of episodes and making edit notes, sourcing music. For the first series of webisodes we filmed them all across one weekend. Filming is really just the very tip of the iceberg, with weeks and weeks of work leading up to the shoot, and then weeks and weeks of work after!  Somewhere in there I’ll have dinner, then maybe a quick meditation before bed, or I’ll read a book to unwind. I’m a non-fiction girl, and super-interested in quantum mechanics!

What advice would you give to someone hoping to follow in the same career path as yourself?

Be prepared to work, like, really work – Having that passion for what you’re doing is the key – because in my experience there’s a lot you invest when you create something new. For me, there have been countless nights and weekends where I could have been out having fun, but I chose to work because I knew it was the only way I was going to make any of this happen! As well as the time investment, there’s inevitably a financial investment too – be prepared to pour everything you have in!

Be prepared to fall over, and know that everyone else falls over too – I think especially thanks to the media, social or otherwise – our perception of what success looks like is just a small snippet of what really goes on behind the scenes. Yes, success is a very real thing and those wonderful highs absolutely do occur – but the not so glamorous path to getting there we don’t often see.  We don’t see the failures, the frazzled late nights, the mistakes – but they happen. Know that it’s normal to hit dead ends, you have days you want to toss everything in the air and give up completely, but if you truly love what you’re doing – you wont.  And that’s what makes it all worth it, and your future successes all the more meaningful!

Celebrate – Be sure to stop and smell the roses! So often we’re caught up in what’s next, rather than being present and appreciating where we’re at on the journey. If you had a great day and kicked some goals, made some progress – break out the champagne and oysters! Life’s too short not to!

Start. Just start. If you’ve got an idea for a concept, an app, a business and it’s something you’re really passionate about, take the first step today! What would you do if you knew you couldn’t fail? Do that!