A Day In The Life Of … Erin James

Ever wanted to step into somebody else’s shoes for the day and see what life is like as a magazine editor, a professional sportsperson or corporate high-flyer..? Well, SHESAID is giving you the closest thing to your very own Freaky Friday experience with our A Day In The Life Of… series.

RELATED: A Day In The Life Of… Carissa Walford

Tell us a bit about what you do?

I guess I would describe myself as a storyteller and a communicator, bringing characters to life on stage and screen. I love engaging with people and connecting with them in as many ways as I can. What I love about my job is that I can work in so many different mediums. For the past 10 years, I have told stories in musicals, plays, cabarets, concerts and film with a host of incredible people. There has never been a dull moment, there is always something new and exciting around the corner (even when you least expect it) and that’s terribly exciting.

When did you discover your talent? Did you always want to be an actress?

I’m sure my family will say that I’ve always had a flair for the dramatic, but I’ve never thought that it was my only option. Just as I love working in a profession which is ever-changing, evolving and always different, I am equally interested in other professions and other means of communication. I thrive when I’m learning. I discovered my love of storytelling very early on (my first acting role was playing the role of Alice in a primary school musical version of Alice in Wonderland!) but I don’t remember making the choice to pursue a career in the arts. It just happened. (And thank goodness it did). No two days are ever the same, no two jobs are ever the same and that is an absolute joy.

My early training was actually in dance (my first tap dancing lesson at age five was really the start of it all) but I studied music, musicology, voice and acting throughout my teenage years. I guess I was an inquisitive child and never stopped asking questions about all kinds of occupations. I was lucky enough to have a great support network around me who all encouraged me to remain focused on academia and remain inquisitive about the world. I’m got a Graduate Diploma in Music, so have taught HSC music at high schools in NSW, I gained my NAATI Accreditation as a sign language interpreter for the deaf and have worked in that capacity since 2007. I run an online business and I’m still studying now, would you believe! I’m in my second year of Post-Graduate Law and I’m finding it absolutely thrilling! I think as an actor you can’t be too inquisitive.

Where do you find your inspiration? Who has had the most impact on you and your career?

When I was very young I watched all of the old Hollywood movie musicals I could get my hands on with my grandmother. We started with Shirley Temple films and moved onto movies starring Fred and Ginger, Gene Kelly, Marilyn Monroe and Judy Garland. I suppose my early inspiration was from these artists who spoke to me through the television set. In terms of having an impact on me as a creative person and my career, well that’s a very hard question to answer quickly. I love to learn – I don’t think we ever stop learning – so I think I have taken a little inspiration from almost everyone who has helped shape my career over the years. From the unwavering support of my family to my the teachers who have carefully taught me my craft. I suppose if I had to pick one person, it would be my mum. She is my lucky charm and my most honest critic. I still use her reactions to my work as a gauge.

Its not always bright lights and glory. How do you deal with the challenges and down times?

I am now a master at living out of a suitcase and I can pack a travel bag in record time! It is true; the bright lights and flashy side of show business is only a very small part of the job. It is hard being away from loved ones, but missing important life events because of production schedules and and working odd hours means you become very good at making the most of the time you’ve got, while you’ve got it. Also, the internet (especially Skype) has certainly helped make the world a smaller place and helped keep me connected to my family when I’m away. I’ve been very lucky in my career that I always feel busy. There is always something to work towards, always something to focus on. This could be in the form of an audition, a job, a personal goal or creating new work. That’s how I deal with the challenges: always look ahead, never look back. 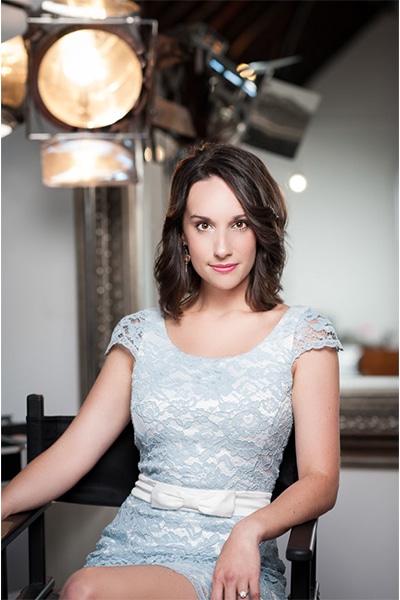 What role has had the most effect on you? Tell us a bit about your latest projects…

Professionally, Monica in The Little Death had the biggest impact. It was my first major film role and something which I am very proud of. I learned so much working on that shoot from everyone involved, not least of all our incredible director and writer Josh Lawson. Being nominated for two awards (AACTA Award and Film Critics Circle of Australia Award for Actress in a Supporting Role in a Feature Film) absolutely blew my mind. I had a great time shooting a short film with Tom Ward (from Please Like Me) which will premiere at the Adelaide Film Festival this October and I’m currently rehearsing for the Australian tour of CATS the musical with the lovely Delta Goodrem.

What are your goals for the future?

I would love to work more in the film and TV realm. It’s a medium which I am falling in love with the more I work in front of a camera.

What advice would you give to someone following the same path as you?

Focus, hard work and planning are just as important as talent and passion. Be kind to yourself, but remain vigilant in keeping your skills honed. You never know when they might come in handy (Side note: I was cast in The Little Death in a role that required the use of Auslan after having worked with a deaf theatre company in my first year out of drama school. If I hadn’t retained all of the language and made a point of keeping that skill up, I wouldn’t have been able to audition for the role in the first place!)

Your workdays are much more exciting than the average 9 to 5. When you’re preparing or performing, what does a typical day involve?

My days are rarely ‘typical’, but I’ll take you through a day in my life when working on a major music theatre production.

Early am: Wake up in time to chat to my husband before he starts work (could be VERY early depending upon time zone differences)

9:30am: Cup of English breakfast tea, two weetbix and sultanas. I’ve had the same breakfast for as long as I can remember.

10am: Yoga time. Whether I’m on tour or at home I try to make sure I fit my daily yoga practice into my morning routine. If I’m performing in a musical, it’s especially necessary to wake up the body, stretch and strengthen muscles and start the day well.

11am-1pm Work time. Running an online business means lots of emails. I try to make sure all of my administration is done early in the day so I can move onto other work (like learning scripts and songs) later in the afternoon.

1pm: Lunchtime! – Catching up with a friend for lunch is one of my favourite things – especially since I’m often away from my close friends while working.

2:30 – 4:30pm: My time. Catching up with my family, learning material, scripts, songs. A reformer pilates class, depending upon the day. Getting ready for the theatre.

5:00pm: Dinner. With a performance at 8pm, I try to make sure I’ve eaten with enough time to digest before heading to the theatre.

6pm: Theatre. There are many things to do before the curtain goes up at 8pm, so I try to arrive at the theatre between 6pm and 6:30pm. I always do a full vocal and physical warm-up before the show so I minimise my chance of injury and fatigue.

11pm: Once the show is finished, it’s time to wind down with the cast. I love to have a glass of red wine and some delicious cheese before heading home.