I don’t want your black lung.

Smokers: standing alongside the sidewalk, blowing your carcinogenic cloud in the unsuspecting faces of passers-by is not cool, guys. Not cool.

Your dirty 90s habit is ruining the fresh air for everyone. The last I heard, Calvin Klein had no plans to release Ashtray as an Eau De Toilette. So please, don’t barrage me with your filfth fragrance. It’s 9am on a workday, and I want no part in smelling like someone who just crawled out of a sleazy nightclub.

I get that at some point you probably took up the habit, convinced you were the badass kid from The Breakfast Club as you snuck behind the school dumpster for a quick puff with your fellow rebels. But times have changed and your terrifying cough and yellowed fingernails aren’t enticing anyone anymore. The only notoriety you’re going to get for being able to smoke a pack a day is as a poster child for lung cancer.

I’m not trying to guilt-trip or shame you out of what I can only assume is a serious addiction, but is it too much to ask that you take that addiction elsewhere, say, not in my face as I’m heading off to a job interview with a head of freshly washed hair that now smells like day-old cigarette butts?

It’s not just me that finds your habit offensive. I’ve seen the disgusted faces of mothers with children as they frustratedly fan your plume of ash out of their kids faces. Elderly people coughing as they’re forced to walk through your second-hand smoke. Well-dressed women eye-rolling as they shake away the unsolicited scent you just thoughtlessly emblazoned their clothing with.

I’m sure you’re aware of the health consequences, notwithstanding lung cancer, asthma and emphysema, and have decided you’re willing to roll those dice. After all, it’s your life, right? Who’s to tell you whether you should inhale a pack a day while they’re hypocritically throwing back a beer? The thing is though, it’s not just your life. 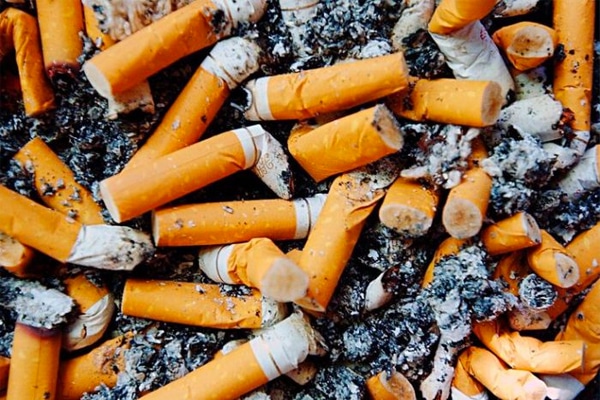 Every time you mindlessly blow your smoke on the sidewalk, outside a pub or at a cafe, someone else is breathing it in. Someone who has absolutely no interest in rolling the dice on lung cancer or emphysema. Someone who may already have asthma and is now facing the possibility of a flare-up thanks to your carelessness. Someone who now almost certainly wishes you never sat at the table opposite them.

It’s that same lack of awareness of others that undoubtedly leads you to think of the world as your own giant ashtray, a kind of convenient playground for your cigarette butts, and a place where your chewed up stubs somehow don’t equal litter.

Except that they do. They are everywhere, and it’s gross, okay guys?

How would you feel if I flung my used tampons all over the place? I mean, they’ll disintegrate eventually, right? And it’s not like they’re actual rubbish…right?

Until you’ve had someone flick the still-lit end of their cigarette out of a car window and into your lap, you’re unlikely to ever understand how utterly non-okay using the world as your personal cigarette disposal system is. Try saying there’s nothing wrong with tossing one on the ground after you’ve had to peel it off of your singed flesh.

All I’m asking for is a little courtesy here. We all have dirty habits that are slowly killing us (some faster than others), but I’m not interested in participating in yours, not one little bit, not at all. So if you really honestly can’t quit, at least spare a thought for the rest of us the next time you go to blow your smoke in someone’s direction, or flick your cigarette butt on the ground. Because the only cool thing about inflicting everyone around you with your unhealthy habit, is the job you’re doing to turn us all off ever wanting to touch a cigarette. ‘Cause it’s really gross and really, really uncool, guys.