What ever happened to girl power?

We’ve all been there. You’re at a party, out to dinner, at work, or anywhere else in the company of male friends. Everything’s fine; you’re laughing and chatting happily about the planned second season of How To Make A Murderer, your dream vacay – you know, normal, non-gendered things – when suddenly you make a comment that’s slightly controversial. Or crack a bad joke. Or spill your drink. Or whatever. Without fail, one of the guys will laugh, roll his eyes and say something like “Good thing you’re pretty, right?”.

And there it is: the notorious sexist barb permeating all too many of our conversations with men. You tense up slightly, aware of the insult, but rather than calling it out or making a snide retort or telling him to resoundingly eff off, you take a deep breath and laugh. Yep, you laugh it off – not because you think it’s funny, but because something inside tells you that you have to. It’s entirely necessary to placate this man, to validate his comment, because, well, you’re not really sure. It just feels… normal.

If you think about it, the same goes for comments casually hyper-sexualizing women. For example, a coworker with hungry eyes saying he’s glad he’s got the cubicle next to you because “you’ve got the best legs”. Or a blind date gets a little too touchy-feely on your first meeting. Or an insecure alpha-male throws his hands in the air and announces “women are crazy” when he knows you’re getting the better of him in an argument.

In our minds and hearts, this hurts and undermines our confidence in both the social and professional spheres. We know it’s wrong, we know it makes us uncomfortable, and we certainly know by ignoring it we’re bitch-slapping our feminist foremothers in the face. Yet still, still, we giggle, mumble something to dilute the situation and change the subject – and we sure as hell feel grimy about it later.

Women have no problem standing up for themselves to other women, so why is it so difficult to stand up to men? After all, one of the first things we’re taught when we hit puberty is to say ‘no’ when we’re in an uncomfortable situation. And everybody has been taught, in no uncertain terms, to reject degrading comments. But when you’re in the moment, your inner queen of sass just won’t make an appearance. You lose your nerve and let the comment, joke or inappropriate touch slide.

Here’s a classic example. I was on a first date once with a guy who would not take his hands off me. Seriously, arms around me the whole night, pinching my thighs, even leaning in and kissing me on the neck while I was talking about my career.

Needless to say, this was all a definite no-no, as was his insistence on kissing me when he walked me back home. I so desperately wanted to get out of there, but instead I told myself he was just being nice, that kissing was fun, and that I hadn’t been on a date in ages so I should just deal with it in the moment and then not answer his raunchy texts. And I felt absolutely horrible about my inability to assert myself. It still haunts me to this day. 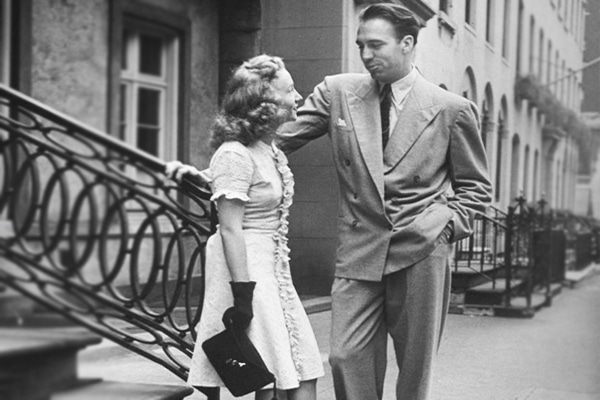 Why is this? Why, after coming such a long way on the feminist forefront, do we still instinctively put ourselves in this position of subordination to men? Could it be a defence mechanism, or do we still for some reason seek validation and approval from the opposite sex? According to clinical psychologist Dr Lissa Johnson, it’s both.

“This is a good example of what psychologists call ‘self-subjugation’ or ‘self-objectification’, whereby women participate in their own subordination partly to prove themselves ‘feminine’ and non-threatening to men, in pursuit of acceptance and approval,” Dr Johnson states.

“Laughter can also make women feel better about gender inequalities. Humor bathes sexism in a soothing balm of lightness, making it seem less confronting and threatening. However, the very act of minimizing sexism simultaneously legitimizes and perpetuates it.”

This instinct to minimize the threat apparently posed by men is not a new or shocking thing. It ties into the reason women so often either excuse or don’t report sexual harassment in the workplace, or giggle with and placate men who make unwelcome advances on the street. We want to get out of the situation unscathed and with minimal drama. And it sucks.

There’s a tendency to assume maybe our biology dictates why we deal with sexism and harassment in a non-confrontational way; perhaps we’re geared to avoid the threat. However, Dr Johnson asserts this is not the case.

“While all human behavior reflects both biology and environment, there is no evidence women are biologically wired to subordinate themselves to men. There is, however, evidence that social conditioning plays a powerful role,” she states.

“For instance, mere reminders of gender-based norms and a personal tendency to conform to the status quo both increase self-objectification in women.”

“While it may serve short-term goals of gaining acceptance and diffusing tension, self-objectification is linked to numerous psychological costs for women, including body shame, disordered eating, a depressed mood, self-doubt, worry and a sense of competition with other women,” she asserts.

So here’s the thing. While sexist jokes may seem harmless, it’s so important to remind ourselves they’re anything but. Even if made in the most unassuming way, if a man is deliberately delivering a dose of chauvinism, it indicates an attitude in need of eradication. So the next time you feel the sexist sting in conversations with men, ask yourself whether the icky feeling of brushing it off, of deflecting both the comment and your self-esteem, is worth it.

Comment: Do you stand up for yourself when men direct sexist comments at you? Is the reaction worth it?