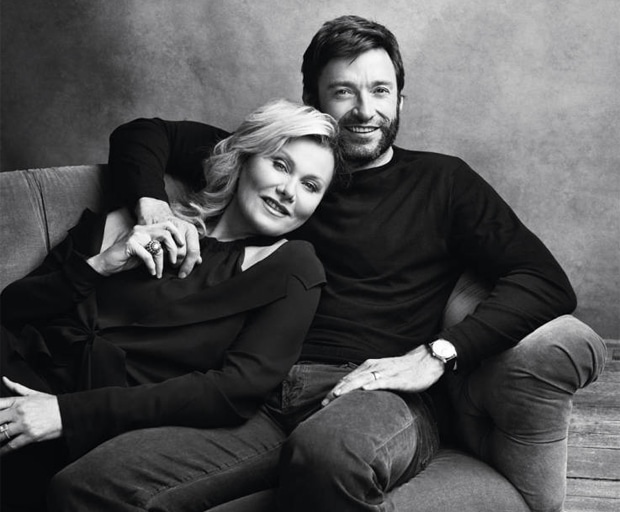 Get The Look: Milkmaid Braids Hairstyle At NYFW

Deborah-Lee Furness is gushing about hubbie Hugh Jackman, revealing she likes all his different movie role looks from hairy to clean-shaven.

“I like him clean-shaven. But I like him all ways: chubby, muscley, skinny,” she tells the October issue of Town & Country.

The adorable couple have spoken about their 18-year marriage, with Jackman, 44, recounting how he proposed to Furness, 57, after falling in love of the set of his first acting gig, Corelli.

“So, I decided, I won’t ask her to marry me for six months,” Jackman said. “Then after four months I thought, That’s the most ridiculous rule!”

Jackman has previously told the story about his proposal, with the young actor buying a rose gold ring, inviting her for a walk in the park, and proposing in front of a group of schoolgirls who were standing by the table he’d prepared in advance with flowers. What a great proposal story!

Fresh from promoting Wolverine and with his new movie Prisoners about to hit the big screen, Jackman is now filming the next X-Men movie in Montreal, but not before looking after the couple’s two kids, Oscar and Ava, for a few weeks while Furness visited six African counties with Bill Clinton’s Global Initiative investigation adoption policies and visiting orphan refugees.

Adoption is one of Furness’ biggest passions. She created National Adoption Awareness Week and sits on the board of Worldwide Orphans in Australia.

“I’m working with Americans to create an international campaign to shine a light on the fact that there are 153 million orphans in the world,” she says. “If that were a country, it would be the ninth-largest in the world, just ahead of Russia.”

Jackman, too, has a lot of experience with helping those in need, which stemmed from his father who worked with developing economies. From being partner in a free trade coffee shop in New York’s TriBeCa called The Laughing Man, to raising money for Broadway Cares/Equity Fights AIDS by selling his sweaty T-shirts after each performance of his hit Broadway show The Boy from Oz (each shirt would fetch between $5,000 and $25,000!).

“I’d sell my soul for a good cause,” Jackman admits.

Furness agrees: “He’d be a great auctioneer, if the acting doesn’t pan out.”

Which is your favourite Hugh Jackman movie?