Did Betsy DeVos Buy Her Secretary Of Education Appointment?

It turns out money can buy you everything, after all…

It feels like each week brings us a new wave of political horror in the United States. We’re all used to politicians putting people in power that they consider beneficial in some way – appoint a friend here, someone who funded your campaign there, maybe someone who you believe is likely to help you push your political agenda… But there’s usually at least the pretence of an unbiased appointment, an argument made for why this person is simply more qualified for the role.

Our future President Trump isn’t even trying with his cabinet picks so far, further proven by who he’s just named as our Secretary of Education: Betsy DeVos.

Her name might be new to you, and for good reason. Despite the fact she’s been involved with the GOP for decades, her role has largely been that of a money giver. She’s fundraised for the Michigan Republican Party and been a “mega donor” of the party for years. The DeVos family donated nearly a quarter of a million dollars to the Trump Victory Fund, and given Trump’s current policy of appointing people to positions of power based on their loyalty to him, this seems to keep in trend.

Being politically active is very different from being politically experienced. Raising money for a nonprofit doesn’t mean you have the experience you need to run it. What little actual political experience DeVos has is limited to a state level. She’s never had to navigate the rapid political waters of Washington, and now she’s been put into a key position that will shape our children’s education, something that will undoubtedly affect the direction of our next generation. 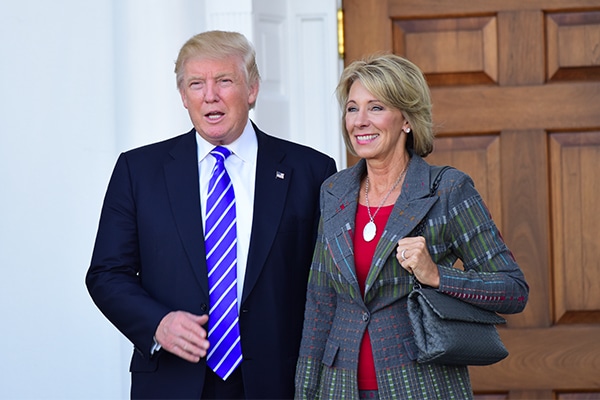 DeVos has never held a position that in any way relates to education. She’s never been a teacher, has no degree in education, she refused to send her children to public schools, and despite knowing nearly nothing about them, is heavily against the public school system in general.

DeVos is also a big supporter of the pro-school-voucher program, American Federation for Children, essentially pushing to send children to charters and private schools. This diverts funding from public schools by funding vouchers; meaning that if you happen to be in a position where you can’t afford these programs, even with vouchers, your students will be going to schools with even lower levels of funding than they have now.

Another big push of hers has been to deregulate charter schools, essentially allowing the state to run schools to be entirely private. In their home state of Michigan, due in part to their efforts, approximately 80 per cent of the state’s charter schools are now run by private companies. Not only does this give the schools a very broad brush to operate on with no one to keep an eye on them, it negatively affects low income children.

In essence, Betsy DeVos bought her seat as the Secretary of Education. She says the right catch-phrases, is loyal enough to the extreme nature of Trump’s electric policies, has money, and is willing to spend it.

If it hasn’t been made clear enough already, let me just say it: Trump in no way plans to “drain the swamp.” He’s not going to invoke change. He’s going to appoint more rich, powerful people into positions that allow the rich and powerful to acquire more of both of those things, at our expense.

This is our educational future.

Comment: What are your thoughts on Betsy DeVos’s appointment as Secretary of Education?