No one’s going to crying Holtzclaw a river any time soon.

Serial rapist and ex-police officer Daniel Holtzclaw might have hinted at remorse when he broke down in tears at the announcement of his 263 year sentence in December, but it’s fair to say he won’t be finding any sympathy in the public as the horrifying details of his case continue to unfold.

Holtzclaw became the symbol of police corruption and brutality last year when he was found guilty of sexually assaulting 13 African American women while on duty, using his position to coerce sexual acts on threat of arrest; deliberately choosing victims with prior drug and criminal convictions from low socio-economic backgrounds who were less likely to speak out.

The ages of the women in question were 17 to 57, and the assaults occurred over a period of seven months from late 2013 to mid-2014, while Holtzclaw worked the 4pm to 2am patrol. Since daycare worker Jannie Ligons, Holtzclaw’s last victim, eventually blew the whistle, the Oklahoma police force has been conveyed as working quickly, tirelessly, and above all, scrupulously to detain him. He was suspended from duty on June 18th, 2014, hours after Ligons reported him, painting the department as the picture of efficiency and honesty.

However, a new lawsuit, filed by Ligons and six other of Holtzclaw’s victims, has challenged the Oklahoma Police Department’s original timeline. Filed this month, the lawsuit alleges a possible 14th victim, and also accuses police of covering up a complaint of sexual assault made on or around May 11th, 2014; 38 days before Holtzclaw was suspended. The claim is based on the recollection of one of his accusers, and contrasts with a police incident report listing a different date, two weeks later.

One of the most explosive claims the latest lawsuit makes, is that a woman actually came forward to accuse Holtzclaw of sexual assault on November 5th, 2013, eight months before he was suspended from the force. It goes on to allege the sex crimes unit actually began investigating Holtzclaw in early May 2014, a total of seven weeks before he committed his final assault. As such, this would mean Holtzclaw attacked half the women he has been convicted of assaulting, while he was already under investigation. 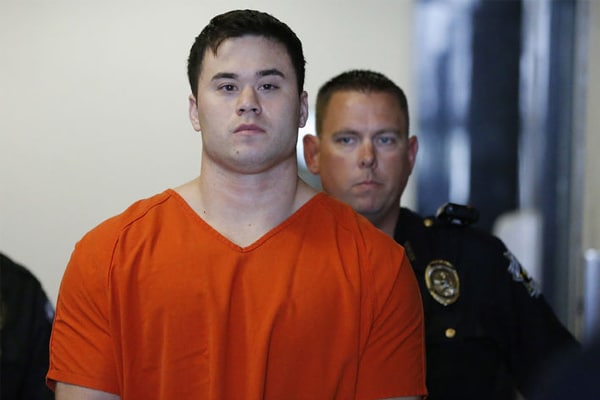 Shockingly, the complaint suggests while he was committing his crimes, Holtzclaw was also being sued for excessive force against an African American man, Clifton Darnell Armstrong. This resulted in Armstrong’s death, and should have triggered Holtzclaw’s immediate suspension, or at the very least, greater scrutiny.

Perhaps most damning of all, is the revelation of the 14th victim, who was assaulted November 5th 2013, roughly two months before the first recorded attack. The victim, known as DC, claims that she was entering a restaurant on November 5th, 2013 when Holtzclaw grabbed her and slammed her face into a brick wall, pressing his erection into her. The officer then allegedly handcuffed DC and drove her aimlessly around the city before he eventually released her. The complaint asserts DC was so terrified Holtzclaw would rape her that she urinated on herself as a desperate deterrent.

The reason DC’s claims are pivotal to the latest lawsuit, is because she identified Holtzclaw by name in her report to police. As such, the violence committed against the victim should have prompted the force to take Holtzclaw off the streets, immediately. However, the reporting officer failed to follow up with DC, and police neglected to take appropriate action against Holtzclaw.

Was it simple negligence, or a deliberate attempt to cover the tail of one within their ranks? Either way, if the latest lawsuit holds water, it could mean Oklahoma City police deliberately let a predator walk free.

Whether it was to save face, out of brotherly solidarity, or perhaps officers even condoned Holtzclaw’s actions, the principle is the same. African American women are constantly made to suffer because for some reason, formulated on the rocky foundations of racism and misogyny, society tends not to believe or value what they think, feel, and say.

Regardless of movement towards equality and understanding, African American women remain tarred with the brush of being either entirely oversexed, or completely sexless. Therefore, it’s all too easy for men like Daniel Holtzclaw to exploit this entrenched racism, knowing their consent or lack thereof would always be considered murky by those in power. Add to that the convenience of a drug record, and other prior convictions, and you’ve got the perfect victim.

Revelations such as those of the Daniel Holtzclaw case are ugly reminders of how far we have to travel on the journey to achieving gender parity and racial equality. While the Black Lives Matter movement is fighting hard to bring equality to the forefront, backed artists like Beyonce who use their celebrity influence to push it, as long as those in power callously disregard and knowingly desecrate these efforts, it will be in vain.

Comment: Are you surprised by the new allegations that police covered up Holtzclaw’s crimes?